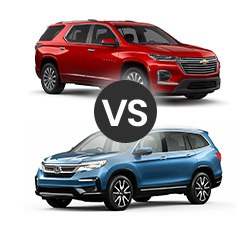 The Chevy Traverse and Honda Pilot are solidly built SUVs that offer three rows of seating. Their interior size is a major selling point and likely the main reason why people would be considering them. On top of being spacious, they're capable, and they have modern technology and advanced safety components. Either one could be a smart purchase for a number of potential buyers.

Some competitors in the market offer several different powertrains, including ones with turbocharged engines or electric motors, but this is not the case with the Traverse or the Pilot. Instead, they offer just one option. They actually both use V6 engines.

The Traverse runs on a 3.6-liter V6 engine. That engine can deliver 310 horsepower and 266 pound-feet of torque, so there's definitely a spirited feel to the SUV. The engine works together with a nine-speed automatic transmission, and it can come with front-wheel or all-wheel drive.

With the Driver Mode Selector knob, people can choose different modes depending on the situation. For example, tow-haul mode would obviously be ideal with pulling a trailer, and snow mode would offer additional traction. There's an available off-road mode that delivers some additional torque to the rear wheels.

Since tow-haul mode was just mentioned, it's a good time to discuss the towing capacity of the Traverse. It can haul up to 5,000 pounds when properly equipped. To help drivers line things up accurately, there's an available hitch guidance feature that's part of the rear vision camera. That feature can also allow a driver to take a quick look at the trailer while driving. Another available feature allows someone to zoom in on the hitch through a program called hitch view.

The engine on the Honda is almost the same size as that of the Chevy. The Pilot uses a 3.5-liter V6, and it's one that can make 280 horsepower and 262 pound-feet of torque. It doesn't have quite as much horsepower and torque as the Traverse does, but it has the same maximum towing capacity of 5,000 pounds.

Honda has also gone with a nine-speed automatic transmission with the Honda. A difference from the Traverse is that the Pilot has paddle shifters. This can be fun for drivers to use on occasion, whenever they feel like manually shifting.

The Pilot has a program called Hill Start Assist. Some may find this to be very convenient, especially if they live in an area where there are some hills. After being stopped on an incline for traffic, a stop sign, or a red light, vehicles sometimes roll backwards before they gain the momentum necessary to start moving forward again. Hill Start Assist can prevent that from happening by holding pressure on the brakes while the driver moves pressure from the brake to the gas pedal.

Further, the Honda Pilot has active noise cancellation. This makes its cabin a little quieter and changes the driving experience a bit.

The Pilot also has an Eco Assist system that can help it use slightly less fuel. To be clear, though, the Pilot isn't anywhere close to being an efficient model, especially in comparison with all of the hybrid options now available. With front-wheel drive, its estimated fuel economy is 20/27 (city/highway) miles per gallon. With all-wheel drive, that drops to 19/26 miles per gallon.

Besides everything having to do with the powertrain, there are other factors that influence the drivability of a vehicle. How big is it, how much space is in its cabin, and what are the convenient features in place?

Chevy's Traverse is a pretty large model. It sits 7.51 inches off the ground and has an overall length of 205.9 inches. The Pilot, in comparison, sits 7.3 inches off the ground and only has a length of 196.5 inches. A difference of close to ten inches in length may be important to people who park in smaller garages or who often parallel park. The two SUVs have pretty much the same height and width.

The length of the Traverse allows it to offer a lot of passenger room and cargo room. It has 41 inches of first-row leg room and 38.4 inches of second-row leg room. The third row of some SUVs is very cramped, but that's not really the case with the Traverse. It manages to offer 33.5 inches of third-row leg room. Obviously, this isn't as much space as what the other rows provide, but it should be enough room for people to be somewhat comfortable.

In the third row of the Pilot, there's a bit less room to stretch out. Those passengers would have 31.9 inches of leg room. There's nothing to be concerned about in the first and second rows, as they have 40.9 and 38.4 inches of leg room, respectively.

As one might imagine after reading this far, the Chevy SUV has more cargo space than the Honda SUV does. The rear cargo area of the Traverse has a volume of 23 cubic feet. The Pilot's rear cargo hold only has a volume of about 17 cubic feet. Lowering all the seats can significantly expand cargo capacity. In this case, the Traverse would have a cargo capacity of about 98 cubic feet compared with the Pilot's 84 cubic feet of cargo space.

With both models, there are options in terms of how the seats can be configured. As was just mentioned, the seats can be easily folded down when not in use. Aside from that, the Traverse and Pilot can have seating accommodations for seven or eight. An eight-passenger arrangement would consist of two seats in the front, with three in the middle row and three in the back. A seven-passenger configuration switches out the middle bench seat for a pair of captain's chairs. Some people feel that this is a more luxurious arrangement that allows the people in the back to have slightly more space to move around and spread out.

Technology can make so many things much easier. Having smartphone compatibility gives drivers a way to play their favorite music or podcasts to stay entertained, and it provides a safe way to make phone calls and check on messages. With both the Traverse and Pilot, Apple CarPlay and Android Auto are standard, as are Bluetooth and SiriusXM Satellite Radio.

Chevy has equipped the Traverse with a total of six USB ports. Some trims have wireless charging pads in front. This can clear the front console area of extra cords. The Pilot also has available wireless charging, but it doesn't have as many charging ports. Its entry-level trim only has two USB ports, while the rest have a total of four. Unfortunately, those riding in the back row of the Pilot don't have easy access to charging ports.

The two vehicles both have similar speaker systems. The base package on the Traverse comes with six speakers, while that of the Pilot has seven speakers. Higher trims of both models have premium ten-speaker systems.

All Traverse trims have Wi-Fi capability, which can be so nice when people want to stream content, video chat, or keep up with work while on the road. With the Pilot, only a few trims have this feature.

However, the Pilot does offer some components that aren't found on the Traverse. The first is called CabinTalk. It's an in-vehicle PA system. When the driver engages this feature, his or her voice is broadcast through the rear speakers and any headphones that passengers might be using. The Pilot also has a multi-zone audio program that lets people in the back choose a different volume from those in the front.

Finally, the Pilot is available with an advanced rear entertainment system. It comes with a pair of 10.2-inch screens. A Blu-Ray player is included as well, as are a set of wireless headphones. The screens are compatible with some streaming apps, and they can do a great job of entertaining passengers on long road trips.

Chevrolet and Honda have done an excellent job of setting up these vehicles with driver-assist technologies. They both have automatic emergency braking and frontal collision warning to reduce the chances of a driver rear-ending another vehicle. The Traverse has a following distance indicator that keeps people from getting too close to other vehicles. In addition, the two vehicles have departure warning and lane keep assist, and this can help keep them centered in their proper positions.

There are some mechanisms that are standard on the Pilot but only available on the Traverse. One of them is adaptive cruise control. It's more advanced than the traditional cruise control program because it can adjust the SUV's speed if the vehicle in front slows down. The other programs that are standard on the Pilot and available on the Traverse are blind spot monitoring and rear cross-traffic alert.

However, the higher trims of the Traverse actually a few extra components. To go along with rear cross-traffic alert, they have rear park assist and rear pedestrian detection.

The Honda Pilot starts out with a price of approximately $38,000. There are seven trims, with several at the top of the lineup coming with standard all-wheel drive. The cost of the Pilot tops out at just under $52,000.

The entry-level trim of the Traverse is more affordable than that of the Pilot, coming in with a cost of about $35,000. On the other hand, the most expensive Traverse is priced higher than its Pilot counterpart. It costs about $55,000.

Both vehicles have a nice technology and safety package, and mid-level trims start to have much nicer features like power-adjustable rear liftgates, leather seats, premium sound systems, and panoramic moonroofs. The Pilot's top trims feel a little more refined than the Traverse's top trims feel, though, especially because they have heated and ventilated front seats, heated steering wheels, and heated rear seats. They also have the rear-seat entertainment systems.

Anyone who needs more cargo space and prefers to have a more reasonably sized third row will likely lean towards the Chevrolet Traverse. It's the larger out of the two SUVs by a fair amount. It's also the more powerful model, but the difference is not too significant.

The Honda Pilot may appeal more to those who want a more comprehensive standard safety package. Its higher trims feel upscale with all of their amenities and high-tech equipment. At the same time, its higher trims are more affordable than the top-level Chevy Traverse, so it's not quite as much of a stretch to be able to afford one of those.