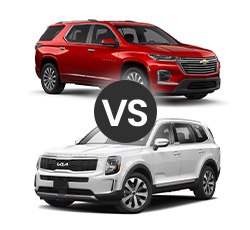 2022 Traverse vs Telluride - How Do They Stack Up? Which is Better?

Three-row SUVs are appealing to many buyers. Not only do they have the interior space that some people are looking for, but they also have excellent capability. The Chevrolet Traverse and Kia Telluride are good options if anyone is looking for a three-row vehicle. In many ways, they have much in common, but there are several areas in which they differ.

Both of these models run on V6 engines. Under the hood of the Traverse, there's a 3.6-liter V6. It can make 310 horsepower, and it delivers 266 pound-feet of torque. These types of numbers will please many drivers, especially those who plan on towing cargo. With the right equipment, the Traverse can tow up to 5,000 pounds.

Chevrolet has paired the V6 engine with a nine-speed automatic transmission. It's an electronically controlled transmission that allows drivers to take manual control whenever they want to. Another way in which drivers can take control is by selecting different modes. The Driver Mode Selector has up to four drive modes, including Sport and Snow/Ice modes. If the Traverse has all-wheel drive, it would have an AWD mode and Off-Road mode for enhanced traction in difficult conditions.

The Telluride's engine is a 3.8-liter V6 version. It, too, gives the SUV a towing capacity of 5,000 pounds. This engine is quite capable. It can generate 291 horsepower and 262 pound-feet of torque, but this is slightly less than what the Traverse's V6 can do.

The Kia's engine works in conjunction with an electronically controlled eight-speed automatic transmission. There's a manual option with this model as well, and there are different drive modes. The modes that come with the Telluride are Comfort, Eco, Sport, and Smart. If the Telluride has all-wheel drive, it would have AWD Lock and Snow mode. This can go a long way in enhancing traction when the conditions would otherwise prove challenging.

Both SUVs have MacPherson struts in the front and multi-link rear suspension systems. One thing that's only available in the Telluride is a self-leveling rear suspension. This suspension can even out the vehicle when it's loaded down with heavy cargo, and by doing so, it can enhance ride quality and handling.

Torque Vectoring Cornering Control is standard with the Telluride. This system constantly monitors yaw rate and steering input in order to figure out whether an adjustment needs to be made. If it seems like there's an issue when the SUV is taking a turn, the Telluride can make the right adjustments in order to maintain stability.

Chevrolet has given the Traverse something similar. This model has StabiliTrak, which enhances stability and traction. If it seems like the vehicle is having issues with grip or steering, then the system can engage itself. It can make adjustments to braking and engine torque to help the driver maintain full control.

The two companies have worked thoughtfully to design the Traverse and Telluride as practical vehicles. They come with many great amenities that are designed to make so many tasks much more convenient.

In addition to navigation, the Telluride features a 10.25-inch touchscreen on all of its models. This is a pretty sizable touchscreen, and it makes the cabin feel much more modern. In comparison, the touchscreen on the Traverse either measures seven or eight inches, depending on the exact trim. This is still a good-sized screen, but people will certainly notice the distinction between this one and the version in the Telluride. This is especially true since bigger often means better these days, at least in terms of high-tech displays.

In both vehicles, there are a number of standard components. They include Apple CarPlay, Android Auto, and Bluetooth. Most Tellurides have six speakers, and the SX trim gets to have a ten-speaker Harman Kardon sound system with an external amplifier and subwoofer. It's pretty much the same with the Traverse. Many of its trims have six speakers, and the higher ones can have ten Bose speakers.

Since these cabins are likely going to be full of passengers at some point, it can be nice to have multiple USB outlets for people to use. The Traverse has six total USB ports, with two in each row. It can also have wireless charging. Similarly, the Telluride is available with wireless charging and comes standard with six USB ports. Its higher trims have an additional port.

Interior space is another important factor to consider when deciding between the Traverse and Telluride. These two vehicles have room for up to eight people if they are configured with a bench seat in the middle row. If, instead, they have a pair of captain's chairs in the middle row, then total seating capacity is reduced to seven.

Leg room is very generous for the first and second rows. In the Telluride, these rows have 41.4 and 42.4 inches of leg room, respectively. The front-row of the Traverse has about the same amount of space, and in its second row, there's 38.4 inches of leg room. This should still be a comfortable place for taller adults to sit.

There isn't as much space in the third row of either model. The Traverse does better, offering 33.5 inches of third-row leg room. In the Telluride, there's only 31.4 inches of leg room. This would likely be fine for a child, but it could be more than a little cramped for an adult.

To keep everyone comfortable, the Kia SUV has a dual-zone automatic climate control system with rear automatic climate control. Its smart key system with push-button start is very convenient to use, and before someone gets into the cabin, the engine can be turned on with the push of a button on the key fob. Heated and ventilated front seats and second-row seats are available, and the most premium trim can be upgraded with a heated steering wheel, customizable ambient lighting, and an auto-dimming rearview mirror.

The Traverse doesn't feel quite as sophisticated. It doesn't have a heated steering wheel or heated and ventilated seats, for instance, though its available two-panel moonroof and power-folding rear seats can be great to have. Its higher trims have a rear camera mirror, which is a really cool feature. It works as a regular mirror, but it can also show the video feed from the rear-facing camera. This way, the view is unobstructed by passengers or cargo. Remote start is available on the Traverse, and tri-zone climate control is standard.

Fortunately, Chevrolet and Kia have chosen to give these models many standard driver-assist features. They both have the ability to warn drivers when they're approaching other vehicles or pedestrians too quickly, and they can send out alerts when drivers seem to be accidentally veering out of their lanes. In these situations, if it seems like a driver cannot react in time, the SUVs can actually take corrective measures on their own. They can do so by hitting the brakes and/or making adjustments to steering.

With the Traverse, blind-spot monitoring and rear cross-traffic alert are available on the base trim and standard on all of the rest. The same is true for rear parking assist. All vehicles in the Traverse lineup have a rear vision camera, and some can be upgraded with a 360-degree monitoring system that provides a greater perspective when drivers are making maneuvers at slower speeds.

Another component that's found in the Traverse is a Teen Driver program. When this program is engaged, it can limit certain features and can keep specific safety mechanisms turned on. It can provide a report card so that new drivers can recognize ways in which they can improve. Further, it comes with a mechanism that prevents the vehicle from shifting out of Park if the driver's seat belt hasn't been fastened properly.

The Telluride has all of the systems that come standard with the Traverse, except for the Teen Driver program. The Kia's standard safety package is even more comprehensive than that of the Chevy, as it also includes blind=spot monitoring and rear cross-traffic alert. Those warning devices come with corresponding mitigation programs so that the chances of getting involved in an accident can be decreased.

Driver Attention Warning is included with the Telluride, too. It can sense when the driver isn't paying close attention to the road, and if so, it will send out an alert. The Telluride's Safe Exit Assist and Rear Occupant Alert can provide a lot of peace of mind to those who frequently travel with children.

It has to be noted that adaptive cruise control is standard on the Telluride but not on the Traverse. With the Traverse, it's an option that comes with higher models and is available on others. The program that is found on the Telluride can even take navigation data into account. If the vehicle knows that a curve is coming up, it can preemptively slow down so that it doesn't take a turn at too high of a speed.

The Telluride lineup starts off with the LX, which costs $33,390. There are three other trims, with the highest being the SX. The SX costs $43,290.

The Traverse is in the same general price range, with its base trim having a price of $33,700. There are six total trims for the Chevy model. The top three trims are all more expensive than the Telluride. The RS, which has sporty elements, costs $44,200, the sophisticated Premier costs $46,600, and the fully decked out High Country has a cost of $51,200.

Despite their higher prices, these Traverse trims don't actually feel that much more refined than the most advanced trim in the Telluride lineup. Kia has done an excellent job of setting up this model with high-tech components and elegant interior details.

The Chevrolet Traverse and Kia Telluride seem to be pretty evenly matched in some areas, such as capability and safety. However, the Telluride takes the win in terms of value, style, and technology. To some prospective buyers, this is going to heavily influence their decision.

The advantage that the Traverse has over the Telluride is hard to ignore. The Traverse has much more interior room, so for anyone who has a lot of passengers and/or cargo to transport, the Traverse will be much more practical. It has the edge when it comes to performance as well, and overall, it feels like the more rugged SUV.