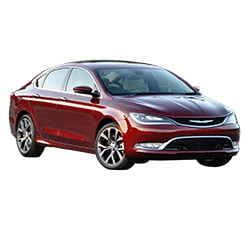 Should You Buy a 2016 Chrysler 200? Here Are Some Reasons For and Against

While family cars such as the Honda Accord and the Toyota Camry continue to sell in great numbers, the 2016 Chrysler 200 has what it takes to become a legitimate threat. Not only is the new 200 more stylish than ever before, but it also offers good fuel efficiency. While all versions of the Chrysler 200 perform great, the S model is especially sporty. Meanwhile, the optional AWD system provides drivers with great traction in inclement weather.

What’s new for 2016?
Due to the fact that the Chrysler 200 debuted as an all-new model in 2015, there will not be any major changes this year. However, the interior will receive updated trim.

In the past, the Chrysler 200 trailed the competition in terms of styling. However, that is no longer the case with the 2016 model. Chrysler did a great job of improving the 200’s curb appeal. The four-door sedan’s sleek design gives it the appearance of sporty coupe. Some of the beautiful paint colors include Vivid Blue, Velvet Red, and Granite Crystal.

The overwhelming majority of buyers will choose the front-wheel-drive version. However, the AWD system is a must-have feature for the drivers who expect to travel on snowy roads. To save fuel, Chrysler engineered the AWD unit to disengage when traveling on dry pavement. This means that drivers will not have to compromise much efficiency.

With a fuel economy rating of 36 mpg on the freeway, the base four-cylinder motor proves to be a gas-sipper. Designed by FIAT, the Tigershark engine can pump out 184 horsepower. Even without the use of a turbocharger, the engine still delivers a punchy performance.

While the base engine is a great choice, some drivers may prefer the thrilling performance of the Pentastar V-6 engine. The brawny engine is able to churn out a sizzling 295 horsepower. When tested at the track, the V-6 model took only six seconds to hit 60 mph. Not only is this engine potent, but it can also average more than 30 mpg.

The Chrysler 200’s strong safety rating makes it an even better value. In fact, the FWD model obtained an overall five-star rating when tested by the government. If desired, buyers can also opt for quite a few advanced safety features. While the blind-spot monitoring system will help drivers to maneuver on the highway, the rear-view camera comes in handy in tight spaces.

The price for a base LX model is about $23,000. Most car shoppers will find this price to be very reasonable. Keep in mind that the base model comes equipped with several great features, including key-less ignition and a port to connect an iPod. Although the very luxurious 200C trim is more expensive, it is still among the best bargains in the class.

For the drivers who want a sports sedan, the 200S trim is definitely a good option. Equipped with a sports-tuned suspension and 18-inch performance tires, the 200S is remarkably athletic out on the road. A set of 19-inch wheels are available as an option. When enjoying a brisk drive on a curvy back road, the sport seats will surely prove their worth.

Standard on the 200S, the Sport mode immediately gives the sedan a more aggressive character. This equates to a more engaging performance on the road.

The 2016 Chrysler 200 looks drastically different than its competitors. This means that this sedan will not blend in with the crowd. The 200’s uniqueness will appeal to the drivers who love to be different.


While the base LX model gets the job done, the higher trims are available with several high-end features. The Uconnect infotainment system has been constantly praised for its easy-to-use design. For the drivers who often travel after dusk, the xenon headlights will provide an extra level of brightness. Some of the other goodies include ventilated seats, a panoramic sunroof, navigation, and a special instrument cluster.

While the 200’s gas mileage is certainly not bad, there are some midsize sedans that can deliver 40 mpg or more. This could be a factor for the drivers who are seeking the best possible gas mileage.

Although the 200S model is very sporty, it fails to offer a traditional manual transmission. Drivers will have to settle for the shift paddles.

3) Backseat Space Can Be an Issue for Very Tall Passengers

Most people will not find the rear-seat legroom to be an issue. However, long-legged passengers may desire a bit more room in the back.

The mid-size sedan segment is very competitive. However, the 2016 Chrysler 200 has leaped to a higher level. While vehicles such as the Toyota Camry and the Honda Accord have a loyal fan base, the Chrysler 200 may offer the best overall value. With a truck capacity of 16 cubic feet, the Chrysler 200 leads the class. Unlike the Camry or Accord, the 200 can be fitted with an AWD system.

Conclusion:
Unlike the old version of the 200, the new model is a serious contender. In fact, the Chrysler 200 has already racked up several awards for its outstanding design and performance. A 100,000-mile warranty further sweetens the deal.
2016 Chrysler Buying Guides: