2017 Chrysler Pacifica Pros vs Cons. Should You Buy? 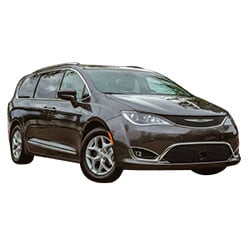 Should You Buy a 2017 Chrysler Pacifica? Here Are Some Reasons For and Against

The 2017 Chrysler Pacifica brings the functional yet lackluster minivan into the 21st century with innovative interior features and modern exterior styling. Launched as a replacement for the car maker’s Town & Country minivan, the Pacifica’s superior amenities position the minivan to adequately compete with familiar brands such as the Honda Odyssey and the Toyota Sienna. Here are just a few reasons why the new Pacifica could easily become America’s favorite family car.

Fuel economy is a key attribute that influences the decision making of car buyers. The new Chrysler Pacifica comes with a 9-speed transmission system that contributes to greater fuel economy than was experienced by Town & Country drivers. The 2017 Pacifica is available in a hybrid model that was not an option with the Town & Country minivan. The Town & Country’s adequate infotainment system, which is called Uconnect, also received a substantial upgrade in the new 2017 Chrysler Pacifica.

Most parents know that a minivan purchase is the responsible option when it comes to choosing their next vehicle. After all, minivans provide plenty of space for their children and all of the gear that goes along with parenting. However, many refuse to buy minivans because of their lack of style. The new Chrysler Pacifica offers a refreshingly modern exterior that is akin to some sport utility vehicles (SUV) and sporty crossovers. The minivan’s new body design improves upon both looks and function, and it is now one of the most aerodynamic vehicles in its class.

The 2017 Pacifica is a star performer in the fuel economy category. The van gets a surprising 28 miles per gallon (mpg) for highway driving and a respectable 18 mpg on city streets. The new minivan’s fuel efficiency rating for highway driving is 12 percent higher than the rating that was achieved by the old Town & Country model. The Pacifica offers a pleasing alternative to the Honda's Odyssey, which also gets 28 mpg for highway driving.

Getting to the storage and seating area of a minivan’s third row without having to remove child and infant car seats that are attached to second-row seats is one of the most difficult maneuvers for minivan users. The 2017 Chrysler Pacifica allows operators to lift and tilt second-row seats out of the way so that they can reach the third-row seating area with ease.

Busy families use minivans to haul everything from sports equipment to groceries. Chrysler’s new minivan has power sliding doors and a back liftgate that can be opened by tapping one's foot on the lower part of the vehicle’s body.

Stow 'n Go seating has become a staple feature for Chrysler’s minivan models. However, its 2017 Pacifica offers a Stow 'n Go seating design that makes it easier to fold away second-row and third-row seats. Operators can fold the powered seats down into their hidden compartments beneath the minivan’s flooring with just one hand. The Stow ‘n Go seating design allows drivers to maximize cargo capacity without having to remove unwieldy seats.

Cargo space is one of the main reasons why car buyers purchase minivans over SUVs. When all second-row and third-row seats are stowed, this minivan has over 197 cubit feet of cargo space. The space underneath the second-row and third-row seats can be used for additional storage when seats are not stowed away. This kind of flexibility is excellent for families that take frequent road trips.

The powerful, integrated vacuum cleaner, which is called the Stow ‘n Vac, is a distinctive feature of the 2017 Chrysler Pacifica minivan model. The vacuum is conveniently located near the second-row seating area. Its hose is long enough to reach every part of the vehicle.

Drivers who chauffeur young children inevitably take their eyes off of the road to correct erring youngsters. In these instances, the risk of automobile accidents can be mitigated by the Pacifica’s LaneSense technology. The LaneSense system alerts drivers of dangerous drifting and lane departures.

Chrysler’s new 2017 minivan is equipped with a camera that provides panoramic views of the area that surrounds the car. Rearview cameras come standard in many of today’s automobiles. However, few of them have cameras that provide a 360-degree scope such as the viewing system in the Chrysler Pacifica.

The Chrysler Pacifica has made family life in the digital age a little easier by installing power outlets and USB ports throughout its 2017 minivan. A 12-volt power outlet is located near the driver's instrument panel on standard 2017 Chrysler Pacifica models. Vehicles that are equipped with the Uconnect Theater package have a 115-volt power outlet that can transform the minivan into a mobile cinema. The 2017 Pacifica has USB ports near all of its seating areas.

Reasons Not to Buy a 2017 Chrysler Pacifica – The Cons

The 2017 Chrysler Pacifica minivans are equipped with active noise cancellation systems as a standard feature. However, car buyers still complained that the vehicle is not the quietest minivan on the market. One purchaser noted that this minivan is not as quiet as the Toyota Sienna.

The expansive, three-row sunroof is an eye-catching feature for many prospective minivan buyers. However, more than one 2017 Chrysler Pacifica buyer reported assembly defects in their vehicles’ sunroofs.

Some buyers noted that their Uconnect infotainment systems did not connect without fixes from dealership technicians. A new owner said that one of the passenger Uconnect touchscreens would not power up properly.

The new 2017 Chrysler Pacifica is already winning awards within the automotive community because it offers distinctive performance and amenities that the whole family can appreciate. The minivan's hybrid option that gets 80 mpg and its Uconnect touchscreens that keep children entertained for hours with pre-programmed, interactive games are just two examples of why Chrysler is a fierce competitor in today’s minivan market.