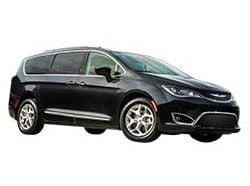 What 2018 Chrysler Pacifica Trim Level Should you Buy? What is the Difference Between Trims?

When it was first released for the 2017 model year, Chrysler’s plan for its new Pacifica minivan was as simple as it was ambitious: to reinvent the entire minivan genre. The Pacifica broke with a number of segment conventions, including dashing modern styling, responsive driving dynamics, and a full range of impressive features, as well as a highly efficient hybrid model. A year later, while it has not completely shaken up the minivan genre, it did force competitors to scramble to catch up.

Chrysler’s own additions to the Pacifica for this model year have been relatively modest. The major change for the 2018 Chrysler Pacifica has been the addition of the new entry-level L trim level and shuffling around of some features around the new model line.

This guide lists all of these different trim levels and the differences between them to help buyers looking to purchase the new 2018 Pacifica navigate the relatively complex selection of models to select the one that works best for them.


Compare the 2018 Pacifica L vs LX Trims. What is the difference?

The Pacifica L is the all-new trim level for the 2018 model year, designed as a lower-cost alternative to the previous base LX model. It still offers a fairly good selection of standard features, and comes with several nice touches like blind spot monitoring and rear cross traffic alert, parking sensors, a 7-inch touchscreen with support for Android Auto and Apple CarPlay, and Chrysler’s handy Stow ‘n Go cargo system for the third row.

Other features include the standards like power features, air conditioning, and 17-inch steel wheels. It does not come with any notable options or packages.

The big ticket upgrade that the Pacifica LX offers over the L is the second row fold-away Stow ‘n Go seats. The Stow ‘n Go system has been one of the major draws of the Chrysler and Dodge minivans, as it allows the seats to fold into the floor in order to provide a flat load floor for maximizing the minivan’s cargo space. It adds a significant degree of versatility that makes the minivan much more useful than being a simple people carrier.

In addition to the folding second row, the LX also adds a power driver’s seat and 17-inch aluminium alloy wheels. Unlike the L, it also comes standard with a 7-seat configuration that includes middle-row captain’s chairs, though there is an upgrade option that includes a removable middle second-row seat. Other options on the LX include a single-screen rear-seat DVD entertainment system and a premium wheels and tires package.

The key differences between the Pacifica L and the Pacifica LX likes in the second-row seating. The captain’s chairs of the LX are far more comfortable and more versatile thanks to the Stow ‘n Go system. However, for drivers whose plans include carrying the full eight people and who have no intention of folding down the second row of seating for extra cargo space, the LX adds little beyond a power seat and nicer wheels.

For most drivers, the added versatility of the LX is a much better option, since few people are likely to need all seven or eight seats of their minivan all the time. With the increased cargo space that the Stow ‘n Go system offers, it can also carry more cargo than most mid-size crossover SUVs. But if carrying people is the sole goal, the less-expensive L can be the better choice.


Compare the 2018 Chrysler Pacifica LX vs Touring Plus Trim Levels. What is the difference?

The Touring Plus model of the Pacifica is the one that starts turning up the comfort and technology dial compared to the entry-level models that it follows. Its side doors and liftgate are both power-assisted, making opening and closing them much easier and possible to do remotely. A remote starter and a three-zone climate control system are also standard on this model, as is a universal garage door opener. It can be equipped with the same upgraded wheels package as the LX, as well as rear seat entertainment, and a navigation system.

There is also an S Appearance Package that adds a number of visual upgrades to the exterior, and a tow package that lets the Pacifica tow up to 3600 pounds. This is also the first model that is available in the more fuel-efficient Hybrid engine configuration.

For the added convenience options that it offers, the Pacifica Touring Plus is a fair value. None of its options and standard equipment are really big, but together provide a much smoother living experience than the lower grade models. For drivers who can appreciate that, it can be a worthwhile upgrade, as it represents a fairly small jump in MSRP over the less user-friendly LX. Finally, it is the least-expensive hybrid model of the Pacifica available, which can also be a good reason to choose this trim level.


Compare the Pacifica Touring Plus vs Touring L Trims. What is the difference?

While it has a slightly confusing name now that there is a separate L trim level, the Touring L is effectively a version of the Touring Plus with standard leather upholstery. In addition to the leather seats, this model also includes standard front heated seats, a roof rack, and a leather-covered steering wheel. It also offers the same packages as the Touring Plus, as well as a number of unique options.

The Premium Audio Group replaces the infotainment system with a larger 8.4-inch touchscreen and adds a 13-speaker Alpine sound system with active noise cancellation and a 506-watt amplifier. It also adds an HD radio, a powered passenger seat, and some extra USB ports.

The other major addition is the Advanced SafetyTec Group that includes a surround-view camera, dynamic cruise control with a forward collision warning with brake assist, automatic high beams, blind spot monitors with rear cross traffic detection, lane departure warning, parking assist, and rain-sensing windshield wipers. Like the Touring Plus, it is also available as a Hybrid.

The leather interior and the advanced safety features are the major reasons to choose the Touring L, though the advanced sound system is also a promising option to pick up. Given the importance of safety equipment to most minivan drivers, this is likely to end up as one of the most popular models for family buyers. The fact that leather seats make it easier to clean up dirt and spills is just an additional bonus.

While significantly pricier than some of the entry-level models of the Pacifica, the Touring L actually lands close to or even below the price of many similar models from its competitors.


Compare the Pacifica Touring L vs Touring L Plus Trim Levels. What is the difference?

The Touring L Plus is an incremental upgrade over the Touring L, offering more standard features and an expanded list of options. In addition to the standard Touring L features, the Touring L Plus adds heating to the steering wheel and the second-row seats. The Premium Audio Package from the Touring L is also standard on this model. It also has a Uconnect Theater rear-seat entertainment system that uses seat-back screens with Blu-Ray support.

Other than that, the Touring L Plus features the same packages as the Touring L, with a few additions. The Hands-Free Sliding Doors and Liftgate package adds exactly that, as does the panoramic moonroof package. The Harman Kardon sound group adds 20 Harman/Kardon speakers and a 760-watt amplifier.

As a relatively small upgrade over the Touring L, this trim level can be easily skipped by most buyers, though it brings a few options that are not available on any of the trim levels below it. The most significant ones are the entertainment system, hands-free doors and liftgate, the luxury speakers and the moonroof.

If any of those options are attractive, then the Touring L Plus is a good option as an alternative to upgrading to the top-end Limited model. Otherwise, you are likely to find better value below it on the trim level chart. Additionally, this trim level option is not available with the hybrid powertrain.


Compare the 2018 Chrysler Pacifica Touring L Plus vs Limited Trims. What is the difference?

The crowning glory of the Pacifica lineup, the Limited is positioned as a luxury minivan. That status is cemented by its standard Nappa leather upholstery and ventilated seats. It also includes the hands-free door and liftgate package and the panoramic moonroof package from the Touring L Plus as standard equipment, and comes with a built-in vacuum cleaner.

The Uconnect Theater rear-seat entertainment system is an option, and the Limited can further be equipped with the Harman/Kardon audio and advanced safety features like the lower models. It can also come in a Hybrid model as well.

Aside from the nice built-in vacuum and the fancy leather, the Limited does not offer anything that one can’t get in a less-expensive Pacifica model. Ironically, this model may be best suited for drivers who want the high-end features of the Touring L Plus without the included rear-seat entertainment, as it is an option here. The Limited does manage to do a good job in capturing the luxury minivan aesthetic however, which can be a good choice if that is the type of car you are aiming at.


Which Trim Level to Choose?

The 2018 Chrysler Pacifica offers the full range of minivan subtypes, from the relatively basic budget models to high-end ones that can easily pass for a luxury crossover on the inside.

In general, the three Touring models are likely to be the best selection for most drivers. The Touring Plus model offers a good sense of balance between quality-of-life features and its price point, the Touring L adds leather upholstery and a nice set of premium options, while the Touring L Plus can be equipped with pretty much all of the Pacifica’s advanced technological entertainment and convenience options.

While the Pacifica Limited looks quite nice compared to the Touring models, it comes with few practical advantages. And while the L and LX models offer a fairly good option for drivers looking for basic eight-seat vehicles, they don’t match the excellent value of the technological options of the Touring models. These are still attractive models and can be the right choice for some buyers, but most will likely prefer one of the Touring varieties instead.

Save Money on a 2018 Chrysler Pacifica:
Find New Car Clearance Prices - Many Vehicles are Selling Below Dealer Invoice Prices.

Every dealer offers a secret price. Many prices are below invoice. Find yours here.
Chrysler Pacifica Buying Guides: