2020 Chrysler Voyageur Pros vs Cons. Should You Buy? 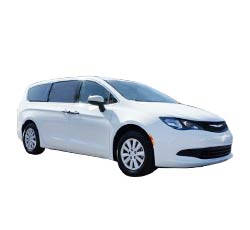 Should You Buy a 2020 Chrysler Voyageur? Here Are Some Reasons For and Against

In the 1983 model year, the Voyageur was the first minivan introduced to the world. Along with its sibling, the Dodge Caravan, these multi-seat vehicles changed the way families traveled. No more crowding into smaller vehicles. In its place were three rows of comfortable seats with easy access.

After a disappearance from the U.S. market, the Voyageur has returned under the Chrysler banner. The question that consumers have is if it will carry on the name's legacy or not?

Its design is the biggest change. Instead of starting from scratch, Chrysler took the L and LX trims of its Pacifica brand and gave it to Voyageur. Modifications made in the 2019 model year made it over to the 2020 version.

1. A Price that Fits Most Budgets

At a starting MSRP of approximately $27,000, the 2020 Chrysler Voyageur is a bargain for consumers. With it you get the power and styling that has made the company one of the top, if not the top, minivan producer. Even the higher-end trim, the LX, is only $3,000 more.

Though it looks like a Pacifica, the 2020 Chrysler Voyageur has a stylish exterior. Even more than the "luxurious" Town & Country. Its sleek and rounded front-end hearkens to the style of the company's full-size sedans. With a non-metallic finish that covers all exterior surfaces, the Voyageur has a clean and uninterrupted look.

3. More Storage than a SUV

When purchasing a minivan, storage is probably not at the top of the list. Nevertheless, when using it for long trips, the amount of luggage and paraphernalia it can carry is a must. Fortunately, the 2020 Chrysler Voyageur has this in spades.

When the third row seats are folded and the second row is stored, the maximum storage capacity is an impressive 140 cubic feet. This is more than some large SUVs on the market. If traveling with passengers, extra storage is available via Sto-n-Go spaces under the floor of the second and third rows. With a deep area behind the liftgate, the Voyageur can easily transport a family without being cramped.

4. Roominess for all Passengers

SUVs are not minivans. Their version of third-row seating is a cramped area that sacrifices the cargo space these vehicles are known for. With the 2020 Chrysler Voyageur, consumers get a true third row of seats that are as comfortable as the second-row captain's chairs.

Back row passengers have an average of 39 inches of legroom and headroom. Shoulder room is equal to approximately five feet of space. This is plenty of area to stretch out. The first row driver and passenger also have room to move with an average of 40-inches of leg and head area.

5. Solid Performance for a Minivan

The 2020 Chrysler Voyageur is normally meant to take the kids to school and soccer practice. Thus, consumers don't want it to do 0-60 in less than five seconds. Instead, they want it to have enough power under the hood to avoid being late to dance class.

Hence, the reason the minivan has a 3.6-liter, 6-cylinder powertrain. It provides close to 300 rpms of horsepower and 262 pound-feet of torque tied to a nine-speed automatic transmission. In the end, this setup allows the Voyageur to tow 3,6000 pounds of material.

Fuel economy in the 2020 Chrysler Voyageur is comparable to other minivans on the road. In the city, it gets about 20 miles per gallon. On the highway, it gets to 30 mpg. With a 19-gallon tank, this provides the minivan an average travel capacity of 475 miles.

Safety measures aren't skimped on in the 2020 Chrysler Voyageur. The main reason is the designers know the average passengers for the minivan -- families. Therefore, they want to protect them as much as possible. Not only with ABS and traction control to avoid skids on icy surfaces, but numerous airbags.

All rows are covered with curtain or dashboard airbags. Passengers in the second and third rows will be cushioned in severe accidents. Meanwhile, the front passenger airbag will only deploy if a person in a certain weight class is sitting there. In other words, it ensures a young child is not up front with the driver.

The ability to stream music and videos is vital in today's vehicles. Especially when you have a minivan filled with kids. Luckily, the designers of the 2020 Chrysler Voyageur understood this. It's the reason why they included compatibility with Android Auto and Apple CarPlay in the minivan.

When connected, both allow the driver to utilize the apps they most rely on. For instance, gathering navigation data in Google Maps or asking about local restaurants. It can make a long trip that much easier.

In addition to smart device connections, the 2020 Voyageur helps the driver with hands-free operations. For calls, Bluetooth compatibility permits phone calls without fumbling on the phone's keypad. On top of this, the infotainment system accepts voice commands. The result is an ability to change radio stations or recall navigation information.

10. Strong Visibility From All Points

One of the difficulties drivers have with minivans is the lack of visibility. This might be due to a smaller rear window or front columns that cause blind spots in the windshield. Thanks to its design, the 2020 Chrysler Voyageur doesn't have that problem.

Both the windshield and rear window are free of obstructions, as are the side windows. In turn, the driver has a near-360-degree view of the surrounding environment. It provides an advantage when switching lanes on the highway or backing out of a parking space.

Reasons Not to Buy a 2020 Chrysler Voyageur – The Cons

Consumers might think a firm seat is a good thing for driving. However, it's quite the opposite, particularly on long drives. Without a pliability, it causes discomfort for the driver and passenger. In the end, delays may occur due to frequent rest stops.

2. Doors Are Not Automatic

One of the benefits of recent minivan designs has been automated options to open the side doors and liftgate. As the Voyageur's trims stem from the low-end Pacifica versions, this is not available as a standard or an upgrade. For consumers, this could be considered an inconvenience, no matter the low cost.

3. Not as Much Cargo Space as Rivals

While 140 cubic feet is a good deal of storage space, there are some minivans on the market that have more capacity. For instance, the Honda Odyssey can store 144 cubic feet of material. The Toyota Sienna beats this with 150 cubic feet of volume.

When the Pacifica's L and LX trims were moved to the Voyageur, most of its elements came along -- except for the hybrid option. Being a higher-priced component, it was left out as an option to keep the starting MSRP low. Without it, there's no room to increase the Voyageur's fuel efficiency ratings.

Automatic transmissions should shift seamlessly between gears as opposed to drivers who rely on manual versions. However, some drivers have detected a sluggishness in the way the gears move on the Voyageur. It may not seem important, but it can be the difference between passing another vehicle on the highway with a burst of speed or staying behind them.

The 2020 Chrysler Voyageur is a strong competitor in the minivan market. One reason is its Pacifica pedigree. The other is its low price. The third is it comes from a company who has made minivans for nearly four decades.

Stacking it up to the competitors, the Voyageur has its highs and lows. When compared to the Honda Odyssey, it ranks high with price and Sto-n-Go storage but fails in safety features. Against the Toyota Sienna, the Voyageur looks nicer inside and out. However, the Sienna wins with its all-wheel-drive option.

In the end, the 2020 Chrysler Voyageur is a good starting point for consumers who want to move into the world of minivans. With an established base in the form of the inherited Pacifica, combined with the legacy of the Voyageur name, it's ahead of the game of other manufacturers who are starting from the ground up.

Another positive is the low MSRP for both trims. Even at $30,000 for the LX, the Voyageur is still a good deal. For it, the consumer gets a strong engine, good fuel efficiency, and a lot of room for passengers in the second and third rows. Throw in a large storage capacity, and the Voyageur is a multi-capacity vehicle.

On the other hand, it lacks many of the driver assist items other manufacturers offer as standard. Furthermore, it lacks a hybrid version to increase fuel efficiency. Basically, what consumers see in the showroom is what they get.

Still, the Voyageur is a minivan that can withstand the wear and tear of constant travel and sometimes unruly passengers. As they grow older and learn how to drive, those passengers can inherit the Pacifica for their own.

Save Money on a 2020 Chrysler Voyageur:
Are you Shopping for a New Vehicle? Find the Best Deals with "Free - No Hassle" Prices Quotes.