2021 Chrysler Voyageur Pros vs Cons. Should You Buy? 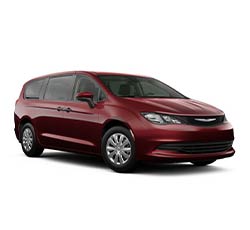 Should You Buy a 2021 Chrysler Voyageur? Here Are Some Reasons For and Against

While minivans may not be the sleekest or most engaging vehicles out there, it is impossible to deny their practicality when it comes to hauling families and their gear. As a result, a few minivan models have stubbornly hung on in the ongoing battle against SUVs. The 2021 Chrysler Voyageur is an option that tries to win over buyers with its low cost. Chrysler also makes the Pacifica minivan, which is where you will find more luxury. Still, the Voyageur offers quite a bit at a low starting price and has many strong selling points. At the same time, it may have cut some corners that will have shoppers looking elsewhere.

Chrysler launched the Voyageur lineup just last year by essentially cutting off the bottom of the Pacifica trim ladder and renaming it. Since it is only in its second year of existence, there were not many changes made for the 2021 Voyageur. The optional driver aid package does add forward-collision mitigation, something that was noticeably absent last year. It joins rear parking sensors, blind-spot monitoring, and rear cross-traffic alert.

The primary reason most shoppers will be drawn to the 2021 Voyageur is undoubtedly its low starting price. In fact, the entry-level model costs approximately 3,000 dollars less than the next cheapest option. You can even get the upper trim level of the Voyager for less than the base model of most other minivans. Those in the market for something brand-new but who are looking to stick to a budget will love the Voyageur for this reason alone.

You will find that the Voyageur uses its interior space very well. The second-row bucket seats that come standard in the LX model have bins underneath for stashing away smaller items out of view. Plus, the standard Stow 'N Go third-row seat can fold flat into the floor, allowing you to easily open up the amount of cargo space in the back of this minivan.

Although it does not have much in common with the pricier Chrysler Pacifica on the inside, the 2021 Voyageur does share the same sophisticated exterior look. It is available in many of the same classic paint colors as its more expensive counterpart, including Velvet Red, Brilliant Black, Ocean Blue, and Billit Silver. If you choose the LX trim, you also get chrome exterior accents and alloy wheels for an even classier look.

While many vehicles now boast standard smartphone integration, it is a pretty nice touch for a minivan with such a low cost. Both Apple CarPlay and Android Auto can be found on either of the available trim levels. They are designed to make it easier to focus on the road by allowing you to use voice commands to access messages, make phone calls, and get directions. These features are part of the user-friendly UConnect 4 infotainment system.

The engine for the 2021 Chrysler Voyageur is estimated to get you 19mpg in the city and 28mpg on the highway. These are good numbers for the class and size of this vehicle. It beats many of its gas-powered rivals, although it cannot keep up with the hybrid options out there.

Obviously, one of the most important things that a minivan can offer is interior space. The Voyager can seat seven people, whether you opt for the second-row bench or second-row bucket seats. Although many rivals offer room for up to eight, the Voyageur makes up for having one less seat with its extra room to stretch out. The first two rows are particularly spacious and the kids should have no issue getting comfortable in the third-row. As for your cargo, the Voyageur gives you a very respectable 32.3 cubic feet behind that last row of seats.

When a vehicle only offers one engine, it is important that it is a good one. Luckily, the 3.6L V6 that comes standard in both Voyageur trim levels makes a very satisfying 287-horsepower. This will not have you winning many drag races, but it is more than enough to move this large vehicle around, even when full of passengers or cargo. The nine-speed automatic transmission works well with this engine.

Although a rearview camera is the only standard safety feature, the Voyageur still manages to impress in this area. It received five out of five stars from the National Highway Traffic Safety Administration in crash testing. The rating can be broken down into three categories, with the Voyageur getting five stars in both frontal and side crash testing while getting four stars in rollover testing. The safe design of this vehicle should be a strong selling point for parents.

The LX trim level of the 2021 Voyageur offers you a rear-seat entertainment system for those longer journeys with the whole family. The system consists of a DVD player and a single screen so everyone will have to agree on what to watch. While rivals may offer more sophisticated setups, they still cannot compete with the Voyageur in price. Adding this rear-seat entertainment system costs just under a thousand dollars, which keeps the Voyageur below the cost of most rivals.

10. Plenty of Upgrades for LX Trim

Those who are after a brand-new minivan but are trying to watch the cost can take advantage of the LX trim's available features. They allow you to add the things that are really important to you without driving the price up too far. Examples of things available for the Voyageur LX include roof rails, heated front seats, a heated steering wheel, and remote start. Some of these features are bundled into the Cold Weather Package, which costs less than $500.

Reasons Not to Buy a 2021 Chrysler Voyageur – The Cons

While the high test scores from the NHTSA are nice, they do not completely make up for the lack of standard driver assistance features. Moving forward, Chrysler may want to include a few basics, such as automatic emergency braking and lane-keep assist, to the Voyageur to keep it more competitive. Of course, this will drive up the price and may drive potential buyers away.

2. Power Tailgate and Side Doors Not Available

One convenience feature that every minivan should at least offer is power-sliding doors. A power-liftgate is a nice touch as well. Busy parents who are trying to load up with their hands full will miss these features.

3. Not Available as a Hybrid

This one may not be as significant to some buyers, but the lack of a hybrid powertrain will certainly be an issue moving forward. As more and more vehicles offer this, it will become a larger factor for drivers. Still, the Voyageur does offer good fuel economy with its standard V6 engine.

4. Firm Seats That Get Uncomfortable

When you first sit down inside the 2021 Voyageur, you will probably think the seats are nice and comfortable. After a while on the road, however, the firmness and lack of padding will likely start to get to you. Sure, it is easy to buy an extra pad for your vehicle, but Chrysler can just as easily redesign the seats to offer more cushion.

The Odyssey is hard to beat in the minivan market. It has impressive standard features and a long list of included driver aids. The Honda Odyssey even offers more cargo room, as well as things like a hands-free power liftgate. On the other hand, the Odyssey is one of the most expensive options out there. In fact, it starts out at about $4,500 more than the Voyageur.

Another incredible heavy-hitter in the market is the Sienna. This option sets itself apart with available all-wheel drive, something rarely seen on a minivan. It also has upscale materials and high-tech features. The Voyager, however, has arguably a more attractive design. Also working against the Sienna is its starting price, which is even higher than that of the Odyssey.

The 2021 Chrysler Voyager accomplishes exactly what it set out to do. It provides drivers with an affordable choice and just enough features to make it a genuine option. Moving forward, Chrysler will want to add more standard equipment without increasing the price too much in order to keep its fanbase. A power-sliding door and liftgate would go along way toward making the Voyageur a more family-friendly choice. Expanding both the standard and available driver aids would also be a smart call so that the Voyageur does not get left behind.