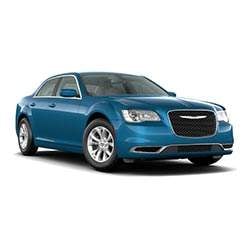 What 2022 Chrysler 300 Trim Should You Buy? What is the Difference Between Trims?

Most people don't know it, but the Chrysler 300 we know today is actually based off of a vehicle that launched all the way back in 1955. This full-size luxury sedan was once a "letter series" since a letter in the alphabet came after its name with each passing year, starting with the letter C and ending at L. But then, in 2005 - a full 50 years after its original release - Chrysler re-envisioned the 300 as a huge sedan with all the modern, upscale trappings they could possibly cram into it.

As someone whose best friend has gone through two black Chrysler 300 models and enjoyed the time spent riding around in them, I can tell you that these vehicles are even more cavernous on the inside than what the exterior lets on. It is also remarkably high-brow for the price point. While it is difficult to see out of the 300 due to some bulky roof pillars in the back and the advanced driver aids that can assist in bettering your visuals are all optional, you do get an optional V8 engine that adds a lot of personality to this vehicle. Also, you can add all-wheel drive (AWD) that that extra bit of traction on slick road surfaces - a definite benefit if you live in a place where inclement weather can quickly turn roads into ice rinks. What tops it all off is that the 300 has an infotainment system that is extremely user-friendly.

There are three trim levels on the 2022 Chrysler 300 to choose from: the Touring, Touring L, and line-topping S. This model year, all of these trims come with a brand new air filtration system. The Touring L now makes standard the Sport Appearance package with its 20-inch wheels, and the V8-equipped S trim level gains a new premium sound system, standard integrated navigation system, and a panoramic sunroof. Given that the 300 is still in its second generation - which was introduced back in 2011 - it is safe to say that Chrysler has worked each model year to keep the 300 feeling fresh. And, with rumors swirling that Chrysler will eventually discontinue the 300 amid lessening demand for sedans, it is quite amazing that the 300 has held on for so long.

Which of the 300's three trim levels is going to work for you? Which one offers the best deal? Which one has the features you require? Which one fits into your budget the best? Let's compare them and find out so that you can make the most fitting decision for yourself.

Compare the Touring vs Touring L Trims. What is the difference?

Let's start out by talking about the mechanical specs found on the Chrysler 300. First and foremost, all of the trim levels are powered by the same 3.6-liter V6 engine, which gets matched up with an 8-speed automatic transmission that delivers power to the rear wheels. All-wheel drive is an option on either the Touring or Touring L. On the Touring and Touring L, the engine serves up a power output of 292 horsepower and 260 lb-ft of torque.

On the Chrysler 300 Touring trim level, you will be riding atop 17-inch wheels in the standard RWD variant or on 19-inch wheels if you get the vehicle equipped with AWD. However, the Touring L trades these standard 17-inch wheels out for a set of 18-inch polished aluminum wheels.

There are heated side mirrors on the exterior, and both trim levels come with LED taillights adorned with chrome accents. As far as headlights go, both the Touring and Touring L are outfitted with automatic bi-functional halogen projector headlights with chrome surrounds. Both trims have a black grille up front with a bright surround, but the Touring L adds LED fog lights to the front fascia.

What kinds of creature comforts will you find inside these Touring trim levels? You will get a standard HVAC system composed of air conditioning combined with a dual-zone automatic climate control system, air filtration, and a humidity sensor. The steering wheel is wrapped in leather and features mounted audio and cruise controls for easy access while driving. While the Touring trim comes with premium cloth high-back front bucket seats and a 60/40 split-folding rear seat, the Touring L trim upgrades the seats to Nappa leather. The Touring L also gains heated front seats.

Both the Touring and Touring L come with a standard media center. This system includes smartphone app integration via Apple CarPlay and Android Auto, hands-free communication
from Bluetooth audio streaming, a media hub featuring two USB ports and an auxiliary audio input jack, SiriusXM GuardianTM that has a free one-year subscription, a one-year subscription to SiriusXM satellite radio, the Uconnect 4C multimedia center with an 8.4-inch touchscreen, and a six-speaker sound system.

The Touring doesn't really have much in the way of standard driver aids. If you want any of those, you will have to upgrade to the Touring L. Doing so will at least nab you some front and rear parking sensors (which will warn you when there are any obstacles that you might not be able to otherwise see in front of or behind the vehicle when you go to park it) and a blind-spot monitor with rear cross-traffic alert (which will alert you if another vehicle is driving in your blind spot while you have the 300 in reverse or are trying to change lanes).

Compare the Touring L vs S Trims. What is the difference?

On the outside, the 300 S looks quite a bit different from the Touring trims. Its changes include a LED taillights with black accents, black surrounds for the headlights, a black front grille with a black surround, and 20-inch Black Noise aluminum wheels. So, yes, it is safe to say that you see a lot more black than you do chrome.

Inside of the 300 S trim level, you still get Nappa leather, but the front seats are switched from the standard bucket style to sport front seats instead. If you go for the V8 model, the sound system gets upgraded to a premium 9-speaker Alpine model with a 276-watt amplifier. Integrated navigation also gets included with this model, as do a panoramic sunroof and aerodynamic body kit for an extra performance edge.

The 300 S is meant to be a sport-oriented trim level, so you won't see a whole plethora of extra features inside of the cabin. What you get is an overall sportier performance though. The 300 S offers standard paddle shifters and a sport-tuned suspension to cap off the performance aspect it was designed around.

The Touring does not come with any optional packages, but there are a couple of packages available for the Touring L and S trim levels. The Comfort Group adds an enhanced security alarm, adaptive headlights that swivel while you turn the Chrysler 300's steering wheel to promote better illumination going through curves, and a steering wheel that is heated and power adjustable. This package also comes with memory settings for the driver's seat, heated rear outboard seats, ventilation for the front seats, and a power sunshade for the rear window.

The other package that is available for the Touring L and S trim levels is the SafetyTec Plus Group. This package is what will outfit the Chrysler 300 with a slew of driver aids. (Unfortunately, most of these are found as standard features on a lot of vehicles being made these days, so the fact that they get relegated to an optional package feels like a cheap cop-out on Chrysler's part here.) With this package equipped on the 300, you get forward collision mitigation (which alerts you of a possible upcoming collision and applies the brakes for you if the system senses you might not be able to in time), lane departure warning (which warns you if the Chrysler 300 begins to stray outside of its current driving lane), adaptive cruise control (which maintains a distance - set by you, the driver - between the 300 and the vehicle in front of it and can even bring the Chrysler to a total stop if needed), front windshield wipers that can sense rain, and automatic high-beam headlights.

With three trim levels to choose from on the 2022 Chrysler 300, there might not be a clear and simple way for you to approach your decision. You might need to spend some time weighing the pros and cons of each trim level. But we will attempt to make things a little bit easier for you by giving you our final recommendation on how we'd equip the 300.

Here is what we would do: Go for the middle-of-the-road Touring L trim level. While it is not as sporty as the 300 S, it has a lot of the features that you will be looking for and leaves room in your budget for tacking on the SafetyTec package. And that is something we definitely recommend adding to the Touring L trim since you don't really get much in the way of standard driver aids; they're all just inconveniently bundled into this extra package option that Chrysler knows most buyers are going to want.

The benefits of the Touring L are that it has more creature comforts than the Touring and has a more softly tuned suspension than the overly harsh sport-tuned suspension on the 300 S. If you live in a climate where inclement weather frequently makes roads into ice rinks, then opt for the all-wheel drive drivetrain as well. It takes fuel economy down a little bit but can be worth it for that extra bit of traction when you definitely need it most.

On the whole, the 2022 Chrysler 300 is a strong sedan that has two powerful engine options. Its classy and cavernous cabin is another big lure. If only Chrysler had added all those driver aids as standard on at least the Touring L trim, we'd be much more pleased with this vehicle which, otherwise, holds its own in a dying segment.