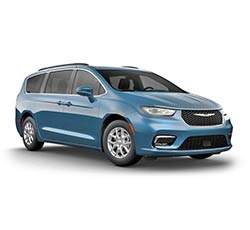 Compare the 2022 Chrysler Pacifica Trims - Touring vs Touring L, Limited and Pinnacle. What is the difference between them?

The minivan market is more competitive than ever, thanks to the number of drivers who are switching over to three-row SUVs instead. Still, some parents will never be convinced that a minivan is not the most practical and versatile option out there. They are spacious and often are filled with the most family-oriented features currently available.

Most critics will agree that the Chrysler Pacifica is one of, if not the, best minivans out there. The seating is comfortable, and the standard feature list is extensive. Buyers can opt for all-wheel drive or a hybrid powertrain, but they cannot have both at the same time. Unlike many minivans on the road, the 2022 Pacifica is also fairly fun to drive in all of its configurations. The impressive all-around visibility is the cherry on top.

It is important to know that the Pacifica is one of the most expensive vehicles in its class. That is why choosing the right trim level of the four options is so important. The entry-level Touring is quite nice, and the next three models add extra layers of luxury and convenience.

The following guide can be used as a tool to find the right version of the 2022 Chrysler Pacifica.

Compare the Touring vs Touring L Trims. What is the difference?

A 3.6L V6 engine that creates 287-horsepower and 262 lb-ft of torque is underneath the hood of the Pacifica Touring, as well as the upper three trim levels. This is a front-wheel-drive vehicle exclusively. Paired with the engine is a smooth nine-speed automatic transmission that makes this vehicle decently efficient and fun. Since the Touring is only available with FWD, it is estimated to get up to 19mpg in the city and 28mpg on the highway. This is considered to be pretty good for a minivan.

The outside of the 2022 Pacifica Touring is sophisticated. LED exterior illumination is standard, including fog lights and daytime running lights. The side mirrors are heated and include turn signal integration. Making life easier for busy parents are features such as a power liftgate and power-sliding rear doors.

Inside the cabin, the Pacifica Touring has seating for up to seven people. Buyers can choose to go with a second-row bench seat, which will increase that number to eight. While the upholstery is a pretty standard cloth, this entry-level model does throw in nice touches like heated front seats and tri-zone automatic climate control. Making this minivan even fancier are the voice-activated climate controls. The driver's seat also has eight-way power adjustment and four-way-adjustable lumbar support. In the second row, standard Stow 'N Go seats make life easier for families.

A closer inspection of the cabin of the Pacifica Touring will reveal clever details such as a rotary knob for selecting gears. Not only does this look sophisticated, but it also frees up space for the center console. The steering wheel comes with controls for the audio and cruise systems for added convenience.

At the heart of the Pacifica's infotainment system in 2022 is a 10.1-inch touchscreen. Wireless Android Auto and Apple CarPlay are both included, along with Bluetooth. There are six speakers and satellite radio to help keep everyone entertained, and three USB ports for charging electronics. Ambient interior lighting is also a standard feature for the new Pacifica.

The 2022 Pacifica Touring has a cavernous cargo area. Behind its third-row, drivers are treated to 32.3 cubic feet of space. When that row is folded down, the cargo capacity becomes 87.5 cubic feet. With both back rows down? The Pacifica Touring offers 140.5 cubic feet, which will easily haul everything from luggage to furniture to bikes and more. Thanks to the standard Stow 'N Go seating in gas-powered models, it is easy to get the back rows of seating out of the way. Some of the Pacifica's competitors still require their back rows to be completely removed to get the most out of their cargo area.

Considering the market that this vehicle is trying to appeal to, it is no surprise that there are numerous standard driver aids. A blind-spot monitor and rear cross-traffic alert come standard, plus rear parking sensors for easily backing this vehicle into a space. The Pacifica Touring also has adaptive cruise control, automatic high beams, lane departure warning, pedestrian detection, lane-keeping assist, and forward-collision warning. There is a rear occupant alert, which is a feature that has been growing in popularity with families lately.

Many people will decide to step up to the Touring L trim level of the 2022 Pacifica. One of the main reasons is that it is available with an all-wheel drive. Opting for that feature will mean that this minivan gets an estimated 17mpg in the city and 25mpg on the highway. These are average numbers for this vehicle class.

At this point, it is worth noting that there is also a hybrid version of the Pacifica Touring L. It utilizes the V6 engine, plus two electric motors, to create 260-horsepower. A continuously variable transmission is what keeps this version of the Touring L. It is estimated to get 82 MPGe. The hybrid models of the Touring L cost several thousand more, but they can also save a driver over a $1,000 a year on fuel costs. The hybrid Touring L is only available with front-wheel drive and has slightly different standard features than its gas-powered counterpart.

Inside, the Touring L is home to leather upholstery and has sunshades for both the second and third rows. It is the first trim level to offer a rear-seat entertainment system that comes with two 10.1-inch screens and Amazon Fire TV compatibility. Adding this feature will also mean getting a third-row USB port and a power outlet.

A dual-pane panoramic sunroof is standard starting with this trim. While the Touring has a more traditional rearview camera setup, the Touring L goes with a surround-view system. It also gains front parking sensors and an automated parking assist. That last feature can steer the Pacifica into a space with little or no help from the driver. All of these driver aids combine to make parking the Pacifica in even the busiest areas a breeze.

Like the Touring, the Touring L can swap out its second-row seats for a bench instead of seating for eight is required. This model of the Pacifica is also available with a navigation system. If sticking with front-wheel drive, the Touring L costs approximately $3,000 more than the entry-level version. Adding all-wheel drive will cost an additional $3,000 as well.

Compare the Touring L vs Limited Trims. What is the difference?

The Pacifica Limited comes exclusively with all-wheel drive, provided that buyers are looking at the gas-powered option. A hybrid Pacifica Limited with front-wheel drive is also available. Either way, this trim adds quite a bit of luxury, but it sticks with the same engine and mechanical features as the two trims that came before it.

There are numerous upgrades to be found in the cabin. The front seats are ventilated, and the second-row seats are now heated. For the third row, the Pacifica Limited adds a power-folding feature to make it even more simple to load up this vehicle with miscellaneous gear. An integrated vacuum cleaner comes standard, making it easier to clean up after the whole crew. This version of the minivan also has a power-adjustable front passenger seat.

For the tech-savvy buyer, the Limited trim level adds a wireless charging pad. This, combined with the wireless smartphone integration, completely eliminates the need for messy cords in the cabin. There are also extra USB ports for the third row, making this a popular option with the whole family. HD radio becomes standard, as well as a truly impressive 19-speaker sound system. Adding to the overall convenience of this trim level is the standard integrated navigation system. The rear-seat entertainment system remains optional for the 2022 Pacifica Limited trim.

Buyers should be aware that the Limited trim level costs nearly $6,000 more than the Touring L with all-wheel drive.

Compare the Limited vs Pinnacle Trim Level. What is the difference?

The top Pinnacle trim level of the Pacifica costs over $53,000, making it over $4000 more than the Limited. This is only if the buyer opts for front-wheel drive - all-wheel-drive models have a starting price of over $56,000. The same V6 that is found on the entry-level Touring remains standard for the Pinnacle. That said, there is also a front-wheel-drive-only hybrid version of the Pinnacle available for test driving.

So why would anyone consider spending so much more for this version of the Pacifica? One reason may be the standard rear-seat entertainment system. It is compatible with Blu-Ray and digital media. Choosing this Pacifica will also mean getting a standard 115-volt power outlet. The Pinnacle model also has an in-cabin camera monitoring system. It allows parents to keep an eye on rear passengers on the standard 10.1-inch touchscreen.

Exclusive to this top trim level is trailer sway control. This feature helps the driver stay in control in high-wind situations while towing a trailer or boat. When properly equipped, the 2022 Pacifica can handle up to 3,600 pounds.

The 2022 Chrysler Pacifica is a pricey option that many will feel is worth paying for. Sticking with the entry-level Touring may work well for many families, thanks to its standard technology and safety features. For the majority of people, however, a step up to the Touring L is going to be the right decision because of its added standard and available equipment.

A 2022 Pacifica Touring L will give parents important features such as extra USB ports, front parking sensors, and a surround-view camera system. It is also the first version of this minivan on the list that opens up the possibility of all-wheel drive. There are several other options for customizing this Pinnacle, such as the rear-seat entertainment system and navigation.

There is no doubt that the Limited trim level is sophisticated and upscale. The integrated vacuum cleaner alone may make it the obvious choice for some drivers. It also has some highly-convenient features, such as the hands-free power-sliding rear doors. At the same time, the price tag will keep it out of reach for many buyers. As for the top Pinnacle model, it does not add nearly enough to justify its incredibly high cost.

The 2022 Chrysler Pacifica Touring L is the sweet spot when it comes to price and features. It will serve most families well.

Compare the trims on other Chrysler Models: