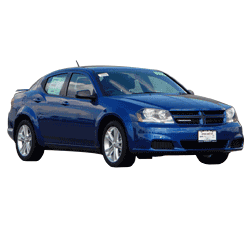 The Top Reasons Why You May want to
Buy a 2014 Dodge Avenger:

Sunday driving just got a new edge in the muscle car, the 2014 Dodge Avenger. A sporty but affordable car in the mid-size range, the Avenger comes in three different models the SE, SXT, and the R/T giving the consumer an opportunity to get the car of his dreams on a budget. Here are other reasons why this car might be the car for you.

*Front and rear stabilizer bars give you a smoother a ride, especially when going down long and winding roads.

*MacPherson struts provide a balanced ride for better handling and a quieter ride.

*Multi-link suspension allows the car to have a smooth ride over rough surfaces by allowing the rear wheels to move independently.

*MSRP list prices range from $20, 595 for the SE and to $25, 795 on average for the SXT and R/T models. Making the Dodge Avenger an economical car for the many features.

*Engines in the SE and SXT are standard four cylinders with 173 HP. Four cylinder engines come equipped with Variable Valve Timing, essential for an even ride. But, for a better kick to your morning and more power to your Sunday drives, the option to get is the 3.6 litre V-6 Pentastar, the best-in-class engine with 283HP. It also offers 260 lbs ft of torque while still maintaining a fuel economy of 29 mpg.

*Ride and handling are refined. Dodge Avenger suspensions are tuned to the performance you choose. For a calm and relaxing ride, the SE and SXT are the models of choice. For a faster performance and a car that hugs curves of the road, the R/T model is the car to acquire.

*The independent insurance for Highway Safety (IIHS) gave the Avenger its Top Safety Pick for 2013, the highest rating given.

*In a government crash test, 4 stars (out of 5) were given for frontal impact and side impact safety.

*The available Electronic Vehicle Information Center (EVIC) keeps you alert for any problems within in the car. It also features a tire pressure gauge letting you know when a tire needs pressure saving you on tires and fuel.

*Brake Assist helps decrease the stopping distance when the brakes are not applied hard enough or soon enough.

*Front head restraints prevent head and spinal injuries by decreasing the space between the headrest and head.

*For those with children in tow, the Avenger features the LATCH child anchor seat system.

*The Avenger also features a keyless entry system and The Sentry Theft Deterrent System is a system that only allows a coded key to start the engine.

*The interior design is sporty, as well as comfortable, and includes premium cloth bucket seating. The interior comes with air conditioning, power locks, power mirrors, and a steering wheel that has audio and speed integration so you can keep your eyes on the road.

*A CD player with four speakers surrounds you in sound for those long drives in the country.

*Another option that might be considered is the Uconnect system that allows all the communications such as phone calls, ( sending and receiving), navigation, and select music all from one centrally located area.

The 2014 Dodge Avenger has the following packages available:

The exterior sports a crosshair grille with a honeycomb texture. Lighting includes halogen headlamps, Ring of Fire Taillamps, and fog lamps to light your way through the night and fog.

*Reviews of the Avenger indicated that the backseats were uncomfortable and the trunk space is smaller than other midsize range cars.

*The fundamental design of the Avenger has not changed making it behind the times of other cars in its category.

The 2014 Dodge Avenger is an affordable, muscle car in the midsize sedan range with a Top Safety Rating. It has many features to offer and with possible options for an even sportier look. Reviews have ranged from fun car to drive to poor fuel economy and uncomfortable seating. When looking around, it might be wise to consider the Avenger but to shop for other vehicles in the midsize car and price range.