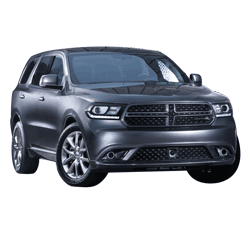 What's New for 2014
The 2014 Dodge Durango received an upgraded front/rear design as well as an updated interior. The newer model offers a more stylish and sleek exterior that has steered away from the more “muscular” exterior. This SUV offers innovative features, improved mechanics, and varying trim options. The 2014 Dodge Durango is an ideal choice for a seven-passenger SUV.

Introduction
Currently, the 2014 Dodge Durango is one of the more popular options for a six- or seven-passenger vehicle. The newer model offers a refined ride and roomy seating. The Durango is available with a V6 engine and an impressive tow capacity. The 2014 Durango is priced competitively and has received several noticeable enhancements.

1) Performance - The Dodge Durango is available standard with a powerful V6 engine. This engine provides an abundance of power that is suitable for most driving conditions. It is important to add that the 2014 Durango is one of the only SUVs, in its class, to offer a model equipped with a V8 engine as well.

4) Comfort and Quality - The improved design of the Durango's cabin is stylish and attractive. The interior is designed using high-quality materials and premium seating. However, some drivers suggest improving the cushioning for the second row seating. Nonetheless, the cabin is virtually silent and offers a relaxed driving environment.

5) Features - The Durango is available standard with Uconnect. This is an intuitive computer system that is operated using a 5-inch touch-screen display. Many drivers speak well of the system for being simple to read and easy to use. There are also dual, flip-down entertainment screens with Blu-ray/DVD compatibility. The Uconnect option also has a voice-command capability that can read text messages and use media apps to stream audio.

6) Performance - The Durango incorporates smooth powertrains that offer an ample amount of power to the V6 engine for typical driving conditions. Acceleration is moderate when merging and passing. However, there is a low-end amount of torque on the V6 model.

9) Comfort and Quality – One of the major improvements of the Durango includes heated bucket seats in the second row. This feature also includes the ability to control the heated seats via rear controls. There is also air vents located in the third row that many passengers find convenient.

10) Safety - There is an optional blind spot monitor that uses a visual indication and a warning tone to alert the driver of vehicles in the blind spot. The Durango even includes a Cross-Path Detection system that helps the driver avoid rear-end collisions.

1) Although drivers enjoy the comfortable front seats, there are a few complaints that believe the second row seats could be somewhat more spacious. In some cases, drivers suggest that the Durango has slightly less cargo space than many other SUVs in a similar class. However, the amount of space provided is a useful amount.

3) The 2014 Durango is a large SUV that has a high belt line. For smaller drivers, this may cause visibility issues when backing up and parking. In some cases, the backup camera can be useful and the touch-screen display can help improve visibility. Although this may be problematic for some drivers, this is generally an aspect of owning a large SUV.

Conclusion
Overall, the 2014 Dodge Durango is an impressive SUV. This upgraded model has received several improvements and enhancements. The Durango is a spacious six- or seven-passenger vehicle that is impressive on the outside as well as the inside. This vehicle offers a smooth ride, powerful engine, and improved drivability.

Some drivers complain about the fuel economy and size of the third-row seating; however, many drivers agree that this SUV is top of the line. In some cases, drivers require more space in the cargo area and want to see an upgrade to the towing capacity. The 2014 Dodge Durango is easy to maneuver, incorporates high-quality materials, and offers a stylish ride. This SUV is reasonably priced around $29,995.

• 2018 Dodge Durango trim levels. What you get with each trim configuration.