2015 Dodge Challenger Pros vs Cons. Should You Buy? 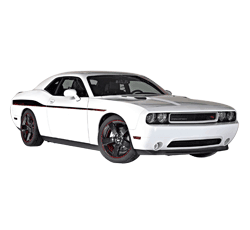 Should You Buy a 2015 Dodge Challenger? Here Are Some Reasons For and Against

Among American muscle cars, Dodge's Challenger model has always stood out as one of the frontrunners. These cars are not just nostalgic classics though. For the buyer interested in a new high performance muscle car in 2015, the Dodge Challenger is a good candidate. Here, we will look at the top pros of the 2015 Dodge Challenger, as well as a few of the cons to keep in mind when making a buying decision.

For the 2015 model, Dodge has performed some significant overhauls. Noticeable changes in both exterior and interior design have served to update the vehicle, and the introduction of the new SRT Hellcat and R/T Scat Pack trims give potential buyers the ultimate performance options. Aside from these major changes, Dodge has also introduced an eight speed automatic transmission as an added bonus to these high performance cars.

Ten Reasons to Buy a 2015 Dodge Challenger - The Pros

True to its nature, the 2015 Challenger looks every inch a respectable muscle car. Very strong exterior lines and a striking newly redesigned front merge together to create a look that will draw eyes going down the road. Dodge held very little back on the exterior appearance of this model, but it has certainly paid off.

2015 is the first year for two new trim packages on the Challenger. The R/T Scat Pack features a 392 hemi engine which puts out 485 horsepower. Topping this is the widely talked about SRT Hellcat trim, which delivers an outstanding 707 horsepower from a supercharged 6.2L hemi. These new trims deliver on power and far outperform the base model.

To complement the new exterior appearance of the Challener, Dodge also redesigned the interior. As a nod to traditional style, the interior is designed to combine a classic appearance with modern conveniences and materials. This may sound like an odd combination, but Dodge certainly pulled it off masterfully.

The cabin of the new 2015 Challenger will seat five people, and perhaps more amazingly, seat them comfortably. Cars of this type often sacrifice cabin size, making for a small back seat and less that roomy front seating. However, the 2015 Challenger is an exception to this rule, as the back seat offers good leg room, and the front is in no way cramped.

The safety features on the new Challenger offer good protection in the event of a crash. Airbags throughout the cabin, a sturdily built framing system, and large areas of crumple zone to absorb shock ensure that the driver and passengers are safe should a collision occur.

Also debuting on the 2015 models is Dodge's new state of the art information and entertainment system. Allowing for everything from Wifi access and direct media streaming to important traffic and vehicle updates, the new system leaves little to be desired. Touch screen technology and voice command recognition are also employed to offer the best possible ease of use while driving.

It is not uncommon for seats to become uncomfortable during long drives. However, the seats in the new Challenger offer good back support and plenty of padding to keep passengers comfortable, even on longer trips. These seats also come in a wide range of colors and materials to best conform to the likings of the individual buyer.

Dodge offers a range of additional exterior and interior packages to further customize the vehicle. While these add to the price of the vehicle, they can be a great way for the potential buyer to get exactly what he or she wants in a new car. Some available packages include a leather interior pack, an exterior sport appearance pack, and a cold weather specialization pack. Availability on these packages varies by model.

While the higher models, in particular the Hellcat trim, can be very pricey, the starting baseline MSRP on the new Challengers is only $26,995. While this is a base model price, it still brings the Challenger into the price range of the average buyer who may not wish to sped as much as the higher trims cost.

With Dodge's usual warranty package of 5 years or 100,000 miles on the powertrain and 3 years or 36,000 full warranty, the buyer of a new Challenger can rest assured that he or she is covered in the event of any defect in the product.

Owing to its nature as a performance vehicle, the 2015 Challenger does not deliver too well on fuel economy. The base V6 engine delivers 19mpg city and 30 highway, which is hardly something to write home about. Higher trims deliver considerably less.

In comparison to the higher trim engines, the 3.6L V6 found on base models is fairly weak, only delivering 305 horsepower. This is still quite a bit of power though, and is only a minor inconvenience.

While not exactly poor, the handling of the 2015 Challenger is not exactly great. Size, weight, and power combine to make top of the line handling a virtual impossibility. While it corners well, it is still less nimble than smaller, lighter sports cars.

With the exception of a few drawbacks, the 2015 Dodge Challenger, especially in its Hellcat and Scat Pack trims, is an excellent high performance vehicle. It may not be for everybody, but to the lover of high power American muscle cars, the new Challenger will not disappoint. Its drawbacks are largely due to its increased performance, and this should be taken into consideration by any potential buyer.