2016 Dodge Charger Pros vs Cons. Should You Buy? 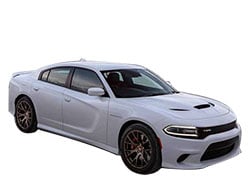 Should You Buy a 2016 Dodge Charger? Here are the Pros and Cons

The Dodge Charger name is deeply rooted in the history of autos, though for many years it was previously associated with performance 2-door models. Specifically, the Dodge Charger has been closely linked with the 2-door Dodge Challenger muscle car.

With the introduction of the SRT Hellcat model, the Dodge Charger has fully staked its claim to be the world’s fastest 4-door. The V-6 performance is quite satisfying, but nothing beats the impressive firepower and character of the V-8s. This model, powered by a 6.2-liter supercharged engine makes the V-8 an awesome 707 horsepower, capable of hitting over 200 mph.

The Dodge Charger is a certainly big car, but similar to any good heavyweight contender, it has its individual moves and is obviously quite comfortable in its own skin. Upgraded for 2016, the brand new model brings forth more feature refinement, enhanced styling as well as a broad powertrains selection.

This vehicle leads among the most versatile of sedans available in the market today capable of meeting the requirements of performance enthusiasts and growing families.

Similar to any good full-size class car, the 2016 Dodge Charger is offering lots of cargo room and interior space. What sets it apart is the number of available luxury-league features like:

While the 2016 Dodge Charger has been designed with a performance orientation, the cabin possesses a broader appeal as a result of quality materials and a dashboard design that is quite sleek.

According to auto reviews, the touch screen of the Uconnect infotainment system is highly responsive in both its small and large versions, and is also user-friendly in design. Though some critics point that the screen is a bit hard to reach, they all agree that the controls of the audio system are located conveniently.

The 2016 Dodge Charger acceleration is literally breathtaking, vertigo-inducing, not even really slowing down for shifts. The 8-speed transmission has drawn praise for its timely and smooth shifting. By the time you are blinking, you're already into the next gear!

The cornering ability and athletic handling of the Charger has been praised by test drivers. As a result of its sloping nose and improved visibility, the Charger is in fact easier to drive than earlier versions.

Getting into the front seats and out has been made easy by big doors. A roof that is somehow elongated makes your getting into the Dodge’s back-seat easy, with lots of headroom all around. Additionally, you benefit from:

The 2016 Charger has plenty of shoulder room while the front seats are roomy. The suede and leather upholstery mix in certain 2016 Dodge Charger models appeals and also improves support during fast cruises. Passengers at the rear also get to enjoy plenty of shoulder and hip room.

In all the Dodge models, the interior storage is quite impressive. Additionally, the 2016 model offers:

Maker Dodge has backed the 2016 model with a limited warranty for 3-year/36,000-mile plus a 5-year/60,000-mile warranty on the powertrain. The car has not been subjected to any recalls due to safety issues from the NHTSA.
Buying Tip: To avoid overpaying on a new car, shop prices online first. Get up front pricing before you walk into a dealership. We recommend the following free services; Car Clearance Deals, NADAguides, CarsDirect & Motortrend.
These free services will offer you the lowest prices and supply you with multiple competing price quotes. You will know the best price before you visit the dealer.

Reasons Not to Buy a 2016 Dodge Charger – The Cons

While the Dodge Charger’s seats are nicely bolstered, critics note that the cushions are somewhat too squishy for comfort during long-distance, a glaring flaw noted by many test drivers.

Visibility cannot be described as the best. Side and front pillars are fairly thick. Though the rear pillars are also thick, these aren't too much of a hitch for Charger models that have rearview cameras.

For shorter users, the trunk lid of the Charger lifts too high for easy reach and closing. While adequate, the trunk is rather space-stingy when pitted against other full-size car standards.

While all the Charger seats are well bolstered and wide, the rear-seat legroom has been reported to be a little bit tight for people who are long-legged.

The 2016 Dodge Charger hasn't yet been subjected to government crash tests. However, previous models of Dodge earned 5-star overall safety testing score from the NHTSA. The car has received a “Good” rating from the Insurance Institute for Highway Safety in all test categories except for the small front overlap crash test.

Auto reviewers have compared the 2016 Dodge Charger with the Chevrolet Impala and the Nissan Maxima (2016 models) being of similar class and size.

The 2016 Dodge Charger blends styling elements taken from the old muscle car with aesthetic and ultra-modern features. The Coke-bottle auto shape is straight from the 60s, but the Charger also gives you large wheels plus the rear and front overhangs of a modern sedan. While retaining the same length, what you now have is more of a compact mid-size car that exudes more presence.
2016 Dodge Buying Guides:

• 2018 Dodge Charger trim levels. What you get with each trim configuration.