2017 Dodge Durango Pros vs Cons. Should You Buy? 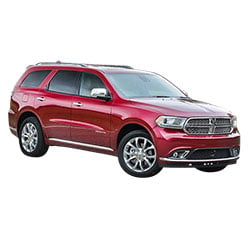 Should You Buy a 2017 Dodge Durango? Here Are Some Reasons For and Against

The 2017 Dodge Durango is ideal for buyers shopping for a midsize SUV that boasts expansive cargo space, powerful engine options, and plenty of high-tech features. It appeals to those who want an SUV that's on the smaller side but still has masculine, truck-like styling.

While there are few changes to this classic Dodge SUV for 2017, the base model is now available only with two rows (seating for five). The other four Durango models are available with two captain's chairs in the second row, upping seating capacity to seven. In addition, the top of the line limited model has been replaced with the GT for 2017. Here's what else you need to know if you're considering a 2017 Dodge Durango.

While many SUVs of this size tilt during turns, the Durango feels composed and stable even with the sharpest steering. Reviewers also love the smooth, comfortable ride, which offers a cushioned feel even on the roughest surfaces.

Those who own a boat or camping trailer can't go wrong with the Durango, which has an impressive towing capacity of up to 6,200 pounds when equipped with the base V6 engine and up to 7,400 pounds with the optional V8.

If you opt for the base model of the Durango, it comes equipped with a slew of comfort and entertainment features, including automatic climate control, both USB and Bluetooth connectivity, a six-speaker audio system, proximity key entry, and push button star. You'll also enjoy the brand's Uconnect infotainment system, with a 5-inch touch screen and voice command recognition. Fans of Uconnect say it's easy to use even for those who aren't familiar with these types of systems.

The 2017 Dodge Durango features 17.2 cubic feet of space behind the third row, 47.7 cubic feet with the back row folded down, and 84.5 cubic feet with all seats down if you opt for the three-row model. The space is configurable in a variety of ways, allowing for flexibility when it comes to passengers and cargo.

If you want a luxury SUV on an economy budget, the higher trim levels of the Durango may fit the bill. They incorporate high-end features like leather upholstery, heated seats and steering wheel, the 8.4-inch touch screen, and a Beats by Dr. Dre audio system boasting 10 speakers and a subwoofer.

If you have children, the rear seat HDMI and Blu-ray entertainment system, which features class-exclusive 9" screens integrated on the backs of the headrests, is a must. This system has a remote and makes even the longest drives bearable when you have little ones. Another great family option? The second-row console with dual cupholders, a 12-volt charging outlet, and a second USB port.

If you dream of a sports car but need the space of an SUV, the 2017 Dodge Durango R/T is the answer you've been searching for. It features distinctive blended suede and synthetic leather upholstery trimmed in red, as well as premium audio; 20-inch wheels; sports suspension tuning; the optional V-8; and a power hands-free tailgate. It can also be upgraded with navigation, Blu-Ray, blind-spot monitoring, and a towing package.

In addition to being one of the only three-row SUVs where adults can sit comfortably all the way in the back, the 2017 Dodge Durango offers unusually easy maneuverability within the cabin. It also has expansive rear doors that open to almost 90 degrees, making entry and exit a breeze.

While some think the boxy look of the 2017 Dodge Durango is dated, its sharp lines and angles actually make it a rugged alternative in a sea of SUVs with soft, supple curves.

Reasons Not to Buy a 2017 Dodge Durango – The Cons

While many vehicles in this class include active safety features like lane departure warning even on the lower trims, the Durango lags behind this trend.

The Durango hasn't been redesigned since 2011. While the interior is fine, it's showing its age--especially compared to other vehicles in the class that feature many soft-touch materials and few hard plastics.

Crash testing is a point of contention for the 2017 Dodge Durango. It earns four out of five stars in the National Highway and Traffic Safety Administration tests, but fares poorly in those given by the Insurance Institute on Highway Safety. In particular, its second-worst "Marginal" score in the small-overlap front impact test is a concern.

The Dodge Durango holds its own among the crowded midsize SUV class. Its carlike handling is head and shoulders above that of its biggest competitor, the Toyota Highlander, making it a great choice for buyers who are used to a smaller vehicle. It's also more powerful than the Highlander and is covered by a powertrain warranty for 10,000 miles longer than the Toyota SUV.

If you're looking for a versatile mid-size SUV with plenty of cargo room and a powerful engine, the 2017 Dodge Durango delivers.

• 2018 Dodge Durango trims. What you get with each trim configuration.