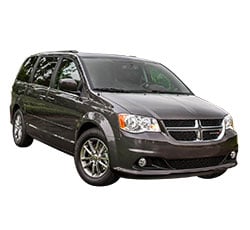 Should You Buy a 2017 Dodge Grand Caravan? Here Are Some Reasons For and Against

Visit Car Clearance Deals, CarsDirect & MotorTrend.
The 2017 Dodge Grand Caravan has made some significant changes to its trims from the 2016 models, but you can expect a ride quality similar to previous years' models. Although the vehicle is very affordable, it tends to under-perform compared to other mini-vans in its class and retains issues common with the previous years' models.

The 2017 Dodge Grand Caravan has had its number of trims reduced from six to four from the 2016 model year. Now, you can only get the SE, SE Plus, SXT, and GT trims. The rear-view camera and touchscreen interface are set to become standard on all trims later in 2017. The Blacktop Appearance Package will be standard on the SE Plus.

1. Base Trim Price is Affordable

These modestly-priced mini-vans make affordable choices for families on a budget. The base trim's starting MSRP is $24,995. At the top of the line, the 2017 Dodge Grand Caravan GT has a starting MSRP of $33,395. Some mini-vans and sedans, as well as many SUVs, are pricier than this, although they tend to pack in more options.

Seating in the Grand Caravan is extremely versatile. Even the standard seating options make for a comfortable ride. The seats are made of a cushion-y cloth fabric, and both of the front seats are four-way adjustable. There is also plenty of head, leg, and shoulder room in the front.

The 2017 Dodge Grand Caravan features second-row Stow 'n Go seats, which makes it simple for you to fold these seats in. All you have to do is flip a lever, and the second-row seats fold into the floor, creating cargo space. These seats come standard in every Grand Caravan trim.

The Uconnect Voice Command system allows you to use your smartphone, navigation system, and radio hands-free while driving, thereby eliminating the distractions drivers face when pushing buttons on their phones and turning dials.

The 2017 Dodge Grand Caravan gets decent acceleration for a mini-van. The 3.6-L V6 engine that is on all Caravans gets 283 hp and 260 lb-ft of torque and is paired with a 6-speed automatic transmission that sends power to the front wheels. This gets the Grand Caravan from 0 to 60 in about 8 seconds, which is good for its class.

The Trailer Tow Group, which includes a Class II receiver hitch and four-pin connector wiring harness, gives the 2017 Dodge Grand Caravan a towing capacity of 3,600 pounds. Towing itself is versatile, and Trailer Sway Control uses sensors to keep your trailer from straying over the line.

The RADIO 430N (which is the upgrade for the van's RADIO 430 system) is a great integration of technology, as it includes Garmin GPS Navigation, a Park View Rear Back-up Camera, and one year of SiriusXM Satellite radio service.

The Grand Caravan features a Single DVD Entertainment System with wireless headphones. This allows your passengers to experience entertainment without having to argue over what music to listen to, making this an attractive feature for those who are often chauffeuring children around.

Reasons Not to Buy a 2017 Dodge Grand Caravan – The Cons

The interior materials aren't exactly low-quality, but they are lower than what you might find in other vehicles manufactured in 2017. The cloth material and some of the plastics look a little cheaper than other materials and lend a slightly dated feel to the cabin's appearance.

The Caravan performed decently in most of its safety tests, but it was given a poor rating by the Insurance Institute for Highway Safety (IIHS) in their small-overlap front-impact test. This kind of impact can cause serious leg injuries to the driver and isn't as problematic on some other mini-vans.

3. Location of Pedals is Too Close for Taller Drivers

If you're a taller individual, you might find the location of the gas and brake pedals to be way too close for comfort when you're in the driver's seat. They are somewhat awkwardly placed, although shorter people might not have as much trouble.

The Grand Caravan is somewhat notorious for giving rough rides. As with the 2016, the 2017 simply does not ride as well as its competitors over rough roads.

The Odyssey is one of the top competitors in the mini-van world. While it costs more than the Caravan, the Odyssey has a quiet cabin, handles more like a sedan, and gets good gas mileage for a mini-van. However, it's second-row seating is much more difficult to move than the Caravan's Stow 'n Go seating.

Another top competitor is the Toyota Sienna. Like the Odyssey, the Sienna's second-row seats are difficult to move. It does, however, have a refined ride quality. Also, the cabin materials appear to be high-quality and chic.

While the Dodge Grand Caravan has trouble competing with other mini-vans when it comes to interior appeal and some performance issues, it is an affordable option that contains a decent amount of high-tech features that the entire family can enjoy. Also, the Stow 'n Go seating is really unparalleled in any other mini-van.