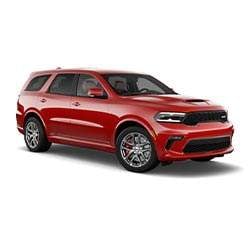 Compare the 2022 Dodge Durango Trims - SXT vs GT vs GT Plus, R/T vs Citadel, R/T Plus and SRT 392. What is the difference between them?

For many drivers, finding a vehicle that has enough room for their whole family but is not a chore to drive is a challenge. Three-row SUVs have become the solution in many cases, but they are not always very engaging. Many also struggle with providing enough space and being versatile.

The 2022 Dodge Durango is attempting to be a well-rounded three-row SUV. It offers three strong powertrains, which should appease those who are looking for raw power. Previously, the third-row was optional for this SUV. It is now standard on all trim levels, and it is surprisingly spacious.

As always, the Durango offers a wide variety of models for drivers to choose from. That said, the exciting Hellcat trim that debuted just last year is no longer an option. The entry-level SXT is very well-equipped and the most affordable Durango by far. Those who are after luxury will love the Citadel, while the SRT 392 is the ultimate performance-oriented option.

Proper research can help buyers find the right version of the 2022 Dodge Durango for their needs. Each trim level more or less builds off the one that came before it, and the following guide will highlight the differences between them all.

Compare the SXT vs GT Trims. What is the difference?

The entry-level 2022 Durango SXT comes standard with rear-wheel drive but is also available with all-wheel drive. It has a 3.6L V6 engine underneath the hood that pumps out 295-horsepower and 260 lb-ft of torque. The engine is mated to a responsive eight-speed automatic transmission that moves the SUV around nicely. Rear-wheel-drive models are equipped with a load-leveling suspension.

When sticking with rear-wheel drive, this SUV is estimated to get 19mpg in the city and 26mpg on the highway. All-wheel-drive models go down to 18mpg city and 25mpg highway. These are not great numbers but are what one would expect for a vehicle that clearly prioritizes power over efficiency.

LED lighting is found all around the SXT. This model has LED headlights, taillights, daytime running lights, and front fog lights. There are heated side mirrors and roof rails for added convenience. This version of the 2022 Durango rides around on 18-inch wheels. As for paint colors, the SXT is limited to just four. Buyers can choose from White Knuckle, Octane Red, DB Black, and Destroyer Gray.

Three-zone automatic climate control is standard for this SUV, which comes standard with seating for up to seven. The driver's seat has power adjustment and there is an auto-dimming rearview mirror. Going with the SRT will mean having cloth upholstery.

Technology features are plentiful, with an 8.4-inch touchscreen coming standard, plus smartphone integration through Android Auto and Apple CarPlay. There are two USB-A and two USB-C ports found in the cabin. You also get satellite radio and a six-speaker sound system.

The Durango SRT gives drivers rear parking sensors and blind-spot monitoring to help make driving this rather large vehicle easier. A rear cross-traffic alert is also included. Although the list of standard driver aids is short, it does include some of the more popular ones.

An exclusive package is available for the entry-level trim. It is known as the SRT Black Package, and it has black exhaust tips, gray metallic badges, and black mirror caps. This package also upgrades the SRT to 20-inch wheels.

For approximately $3,000 more, drivers can step up to the GT trim level. It has the same standard engine and the same drivetrain options. That said, this model does add a dual exhaust port system, which takes the horsepower up to 295 from 293. This model adds two extra paint options. They are Redline 2 and F8 Green.

This model loses the roof rack, but it gains a variety of black exterior accents. It also upgrades to 20-inch wheels to ride around on. A power liftgate is one of the more significant upgrades made by this trim level. Inside, it has heated front seats and a heated steering wheel. A remote start is added by the Durang GT as well.

Compare the GT vs GT Plus. What is the difference?

An extra $4,000 will let buyers upgrade to the GT Plus. It builds directly off the GT but adds quite a bit more luxury and convenience. This model adds things like leather upholstery, heated second-row seats, and an auto-dimming driver's side mirror. It also gives buyers the ability to swap out the second-row bench seat for captain's chairs and seating for six instead.

The front seats get a nice upgrade here. Both the driver and front passenger have power adjustment, and the driver's seat gains memory settings as well. This is also the model to go with to get adaptive cruise control, forward-collision warning, and lane departure warning. Although the price jump is sizable, there are several highly sought-after features added by the GT Plus.

Compare the GT Plus vs R/T Trims. What is the difference?

Next up is the R/T trim level, which costs around $5,000 more than the GT Plus. This is the first model to come standard with a 5.7L V8 engine that pumps out 360-horsepower and 390 lb-ft of torque. An eight-speed automatic transmission is included as well. The R/T also gets a sport-tuned suspension for even more fun at the wheel. As for fuel economy, front-wheel-drive models are estimated to get 14mpg in the city and 22mpg on the highway. These numbers remain the same with all-wheel drive.

Many cabin upgrades are made here as well, which may be more important to some buyers. It has a nine-speaker audio system from Alpine that includes a subwoofer and HD radio. There is also a Wi-Fi hotspot and an upgrade to a 10.1-inch touchscreen. A wireless phone charger and an integrated navigation system with voice controls are two more tech upgrades made by the R/T trim level.

Both Android Auto and Apple CarPlay become wireless with this trim level. There are also two more USB ports than previous models had. On the safety front, the 2022 Durango R/T has automatic high beams and front parking sensors.

The R/T has an exclusive R/T Tow N Go package. It gives the SUV the ability to tow up to 8,700 pounds. The package includes a long list of things, including a performance exhaust, wide-body flares, active noise canceling, an integrated trailer brake controller, and a Class IV trailer hitch. Automatic headlamp leveling is also included in this package. Without this package equipped, models with the 5.7L engine can tow up to 7,400 pounds.

Compare the R/T vs Citadel Trims. What is the difference?

The Citadel is quite a bit more luxurious. It goes back to the V6 engine as standard, but it is available with the 5.7L V8 for a few extra thousand dollars. If buyers stick with the V6, the Citadel costs around $2,000 more than the R/T. This model loses the performance-oriented features of the R/T, such as the sport-tuned suspension.

Paint colors have been fairly consistent up until this point. The Citadel, however, is only available in White Knuckle, Octane Red, and D8 Black, giving it the fewest choices of any of the trims.

Going with the Citadel will mean that the Durango comes standard with a Trailer Tow Group IV Package. It includes load-leveling shock absorbers and a Class IV trailer hitch receiver. This package was available on all of the lower trims as well. This is not the same package that is available for the R/T, however, and it will only give the Durango the ability to tow up to 6,200 pounds when it has the V6 engine.

Other standard Citadel features include sophisticated chrome exterior accents and a sunroof. Moving inside the cabin, the Citadel is only available with second-row captain's chairs and seating for six. The leather upholstery gets an upgrade and the front seats gain ventilation.

Compare the Citadel vs R/T Plus. What is the difference?

The R/T Plus will cost buyers just under $3,000 more than the Citadel. It has a 5.7L V8 engine, meaning it pumps out 360-horsepower. The sport-tuned suspension reappears. It also reverts back to the second-row bench seat, giving the Durango R/T Plus seating for up to seven. The R/T Plus is available in all six of the paint options the Durango offers in 2022.

Not too many upgrades are made by this model, although it does get a 19-speaker Harman Kardon sound system on its standard feature list. This has been optional on previous trims. It also has a suede headliner and Nappa leather upholstery. Buyers can look at the R/T Plus as a combination of the luxury of the Citadel with the power and performance of the R/T.

Compare the RT Plus vs SRT 392 Trim. What is the difference?

At the very top of the 2022 Durango trim ladder lives the impressive SRT 392. It is the only model to come standard with an all-wheel drive. This is also the only model where buyers will find a 6.2L V8 engine that makes a whopping 475-horsepower and 470 lb-ft of torque. There is a price jump of $14,000 when going up to the SRT 392.

This most powerful Durango is also the least fuel-efficient. It gets only 13mpg in the city and 19mpg on the highway. An eight-speed automatic transmission remains standard for this engine as well. It also has an adaptive suspension and larger Brembo brakes.

There are not too many feature upgrades to be found on the SRT 392, although it does maintain the luxury found on the R/T Plus. There are sport front seats with the nice Nappa leather upholstery. This model also has active noise cancellation, which is important because it helps drown out the noise of the hearty 6.2L engine.

Choosing the right 2022 Durango will depend mostly on the budget and how important power is to the buyer. If the V6 has enough to offer, the entry-level SXT is a great choice. It has smartphone integration, blind-spot monitoring, USB-C ports, and more. The SXT is also significantly less expensive than the models that came after.

The GT and GT Plus are worth skipping unless heated front seats are a necessity. For more power, however, buyers will need to go up to the R/T. Not only does it have a 5.7L engine, but it also has an extensive number of extra technology features to enjoy. The R/T Plus and Citadel trim levels both add extra luxury but also come with a hefty price jump. As for the top SRT 392, its $66,000 plus price tag will have buyers looking elsewhere in a hurry.

Choosing the 2022 Durango R/T will give buyers the power they want from a Dodge, plus plenty of features, at a reasonable price.

Compare Trims on other 2022 Dodge Models: