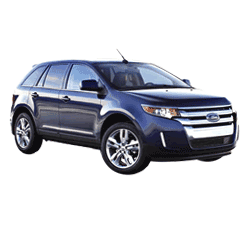 The 2014 Ford Edge is a midsize crossover sport utility vehicle that has mass appeal. While this year's Edge isn't visually awe inspiring, it isn't ugly either. The vehicle is more about utility and amenities than it is about stunning aesthetics. This is exactly why the Edge ranks towards the top of the crowded midsize crossover group. [ For the 2015 model see - Ford Edge Pros and Cons ]

Competitors include the Nissan Murano, the Dodge Journey, the Kia Sorento and the Jeep Grand Cherokee. The Sorento lacks the Edge's impressive array of technological features but is cheaper. The Journey is a solid competitor as it has a spacious interior and an infotainment system with an excellent user experience design. The Murano is comparable to the Edge but only provides buyers with one engine and transmission option. The Grand Cherokee is the Edge's stiffest competition as it is sound in all aspects. Yet the Edge costs a few thousand dollars less.

The Edge is mostly unchanged from the previous edition. This year's trim levels include the SE, SEL, Limited and Sport trims. Buyers are not disappointed with the relatively unchanged Edge because it is the definition of a high quality, technologically advanced automobile. The front of the Edge has a gigantic grille that is much larger than prior models. The vehicle's interior has smoother contours and improved plastics that are soft to the touch. Everything on the interior seems a bit less rigid and blocky in shape. The SE and SEL versions have a mock carbon fiber trim and the Limited model has strips of wood grain on the console. The center stack now has a larger LCD screen. The Edge Sport trim model now comes with a metallic black trim and seats with sharp stitching that contrasts along with grey colored inserts.

1) The Edge offers the option of an EcoBoost four cylinder engine that provides 2.0 liters, 270 foot=pounds of torque and 240 horses. It is combined with a 6 speed automatic transmission to provide 21/30 mpg on city roads and highways, respectively. This beats out the Edge's competitors by a significant margin. Only the Chevrolet Equinox and GMC Terrain perform better with 22/32 mpg.

2) For a large vehicle like the Edge, one might think that it is difficult to maneuver. However, this is not the case in the slightest. The steering is incredibly precise and the vehicle can turn on a dime without disrupting passengers. It responds to driver commands exactly as demanded and expected.

3) The vehicle provides a comfortable and quiet ride for all passengers. This is partially due to its superior handling and high quality shocks.

4) The MyFord Touch system takes the place of the typical array of toggle switches and buttons. It can be voice operated and also controlled with touch screen menus or buttons on the steering wheel. Other interior amenities include a USB port, adaptive cruise control and MyKey technology which empowers adults to set volume and speed limits for teenage drivers.

5) The seating is fantastic. The Edge seats five total people and the rear seats are especially spacious. Rear passengers can actually recline their seats back for even more comfort. The front seats are luxuriously soft.

6) Buyers have the ability to choose one of three engines that best fits their needs and desires. As referenced above, the EcoBoost engine offers optimal fuel economy. There are also two V6 engines. All trims but the Sport have a V6, 3.5 liter engine with 253 foot=pounds of torque and 285 horses. The Sport provides a V6 with 3.7 liters, 280 foot=pounds of torque and 305 horses.

7) The vehicle is loaded with safety features like stability control, optional rear parking sensors, blind spot monitoring, a rearview camera and the MyKey technology referenced above. The Edge has full length side curtain airbags and front seat side impact airbags.

9) The SEL trim has an incredible amount of amenities like satellite radio, EasyFold rear seats, dual zone climate control and a SecuriCode keypad.

10) The Limited and Sport trims are even more impressive. The Limited adds luxuries like 18 inch chrome wheels, driver memory functions and heated mirrors. The Sport trim has a navigation system, a back seat entertainment system, a panoramic sunroof and more.

1) Some critics complain that the MyFord Touch screen has a steep learning curve and a complicated user experience design. This criticism is debatable as it is subjective to each individual. Younger drivers might pick up the technology quicker than their elders.

2) The vehicle's throttle is a bit sensitive. When the gas pedal is pressed, the Edge responds with more of a quick jump than other vehicles.

3) The Edge Limited and Sport level trims can be a bit expensive, especially when compared to a competitor like the Dodge Journey that has a starting MSRP of only $19,995. The Sport trim has also been criticized for its rough ride. It has gigantic wheels and a sport tuned suspension that disrupt the comfort levels of passengers who are more on the sensitive side, so to speak.

4) The Edge's rear visibility is a bit limited. The driver's ability to see smaller sized objects behind the vehicle and to its side can be obstructed by the vehicle's side glass. Yet drivers can add a rearview camera and a blind spot information system to fix the problem.

5) Although the Edge is rated as a Top Safety Pick, its ratings don't lead the midsize crossover class. Its has only a 3 star frontal crash test rating and does not offer inflatable rear seat belts.

This year's Edge has a gorgeous interior, offers plenty of space and is equipped with all the fancy bells and whistles that the younger crowd desires. Yet it is also functional for the middle aged and older demographic that needs a vehicle to transport a family and cargo. At a bare minimum, the Edge is worth a test drive and should be seriously considered for purchase.

• 2018 Ford Edge trim levels. What you get with each trim configuration.