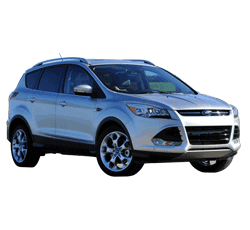 1. Fun to Drive
While some SUVs can seem clunky, the Escape, which is built on the same platform as the Ford Focus, is quick, agile, and fun to drive. The handling calls to mind that of a much smaller car, while you still benefit from the roominess of the SUV styling.

2. Modern Athletic Exterior
The Escape was redesigned for the 2013 model year, so while there aren't many changes for the 2014 version, the new look still feels fresh. More hatchback-shaped than traditional SUV, the Escape's exterior is sharp enough to compete with leaders in this class. The Z-shaped body lines are designed to give the vehicle a dynamic look to match its agile feel.

3. Value
Kelley Blue Book named the 2014 Ford Escape one of the 10 Best Affordable SUVs for the model year. Pricing starts at just $ 22,610 for the base model, which packs in plenty of features not necessarily seen in more expensive vehicles.

4. Unprecedented Standard Technology
Even the base model of the Escape comes with standard features that will please even the most discerning tech-head. You'll enjoy power windows, power door locks with remote keyless entry, trip computer, and cruise control; Bluetooth sync connectivity with 911 assist is also standard, as is the 6-speaker stereo with CD player and auxiliary audio input jack. In addition, the MyKey system allows you to program your preferred options, making the car truly your own.

5. Bold, Unique Interior
The 2014 Ford Escape goes out on a limb with its unusual interior styling with exciting results. The instrument panel is heavily styled and finely detailed, with a swooping motif that highlights the high-quality materials used in construction.

6. Built for Cargo
Not only does the Escape have plenty of rear storage space, it also has a unique foot activated liftgate. This feature, which works only when the key is near the back of the car, allows you to go hands-free and open the hatchback with just a gentle kick to the bumper--perfect when you're loading up groceries, luggage, or sporting equipment.

7. Plenty of Power Options
With three trim levels and a variety of engine choices, you can customize your Escape to be more powerful or have more fuel economy--although even the highest performing engines will still give you respectable gas mileage. The most powerful choice, the 2.0-liter EcoBoost turbo four, will give you 240 horsepower while still providing 30 mpg highway. By contrast, the base model's engine provides 178 horsepower and 33 highway miles per gallon.

8. Exciting High-Value Options
The choices available for the highest trim level give you the luxury and features of a much higher class car for a lower price. These include leather seats and steering wheel, power moonroof, blind-spot warning, automatic parallel parking, an 8-inch touchscreen, and navigation system, as well as heated seats and side mirrors and premium audio system with HD Radio, iTunes tagging capability, and 10 speakers.

9. Eco-Friendly Interior
If you're concerned with going green, you'll be pleased to learn that not only does the Escape have excellent fuel economy for its size, but makes optimum use of recycled materials. The car's interior carpet is made out of 100% recycled polyester fibers using 25 plastic bottles, and is itself recyclable when the car is no longer in service.

10. Available Four-Wheel Drive
Although front-wheel drive is standard, those who are interested in taking their 2014 Ford Escape off-road can easily do so with the four-wheel drive option. Not only does this make it possible for you to drive in the worst weather and road conditions, it also offers optimum driver control.

While the combination of affordability, features, and styling make the 2014 Ford Escape an ideal choice for most drivers looking to purchase a crossover SUV, there are some caveats. Some reviewers note that the MyFord Touch infotainment system can be difficult to use and often suffers from lags in processing time. And although the safety ratings for the Escape are good overall from the Insurance Institute for Highway Safety (IIHS), the SUV did score "poor" in the Institute's new small-overlap frontal test. Despite these flaws, the 2014 Ford Escape is one of the top crossover SUVs in its class.

• 2018 Ford Escape trim levels. What you get with each trim configuration.