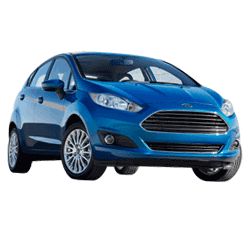 Today’s economy is difficult on many people. Especially if you are in the market for a new car, value should be a primary concern. If you are looking for something you can rely on to get you to your desired destination, gloss over the unnecessary perks of luxury sedans. Focus instead on a sedan that offers value while still has all the driving features you need. Take the 2014 Ford Fiesta for a test drive today. [ For the 2015 model see - Ford Fiesta Pros and Cons ]

For the new 2014 model, Ford has enhanced several features of the Fiesta. While it is not a sports car, Ford equipped the 2014 Fiesta with a more powerful engine and sportier handling. The slick style was paired with Bluetooth and iPod interface in the 2014 models. If you want to add a little luxury to your ride, you can upgrade the new Fiesta to heated front seats, leather upholstery, and a keyless ignition.

2) Fuel efficiency should be as closely considered as initial price. Gas is something you will be paying for throughout the life of the car. The 2014 Ford Fiesta gets 27 mpg in the city, and an incredible 38 mpg on the highway. It will earn its worth in gas savings. The 2014 Chevrolet Sonic only gets 26 mpg in the city, and the 2014 Nissan Versa only offers 36 mpg on the highway.

4) All seven of the new 2014 Ford Fiesta models come with AdvanceTrac Electronic Stability Control. This makes driving safer as it automatically applies the brakes when the car detects wheelslip.

5) The optional EcoBoost package offers you even greater savings while driving. The 1.0L EcoBoost I-3 Engine can provide fuel efficiency up to 45 miles per gallon.

6) Sirius Satellite Radio offers extra enjoyment during your drive. Though it does not come standard in the lower models, if you do a lot of driving, it is an upgrade worth considering.

8) Responsive steering makes riding in the 2014 Ford Fiesta a calm experience. The sharp handling makes the Fiesta easy to maneuver and quick to react to your movements.

The 2014 Ford Fiesta seems like an overall good buy. Still, do not forget to look at some features that may leave you wanting something more.

1) The 2014 Ford Fiesta only comes with front wheel drive. If you live in an area with snow or sleet, this may not be the right car for you.


2) Do not get the 2014 Ford Fiesta if you have a big family. The rear seating space is small and cramped. The cabin is smaller than some of the competitors.

3) The 2014 Ford Fiesta is a compact car. The cargo space in the vehicle is very limited.

4) If you often go on long drives or have a long commute to work, consider that carefully if you test-drive a 2014 Ford Fiesta. The seats tend to be uncomfortable.

5) If you are looking for value that comes with a sporty look, the 2014 Ford Fiesta may not be able to offer you what you want. It does not have a lip spoiler like the 2014 Nissan Versa or the 2014 Chevrolet Sonic.

6) The 2014 Chevrolet Sonic also comes with a 24-month/ 24,000-mile maintenance warranty. If you are not handy with cars and need help when performing routine maintenance, the Ford Fiesta may not be your cup of tea.

7) The 2014 Ford Fiesta does not come with an in vehicle assistance service. If you are concerned about safety, consider a car with a service such as OnStar.

8) The steering wheel of the Fiesta is made of urethane. If you park your car in the sun a good portion of the time, consider either covering your steering wheel or getting a car with a leather steering wheel. Urethane will deteriorate with a lot of sun exposure.

9) J.D. Power and Associates only rated the 2014 Ford Fiesta with 2 stars for predicted reliability.

10) While Ford put new technology in the 2014 Fiesta, it does not seem it was thoroughly thought through. The MyFord Touch interface is not well implemented. Almost all the functionality is controlled via voice commands or the touch screen. The touch screen is recessed, small, and too far away to reach without leaning out of your seat.

• 2018 Ford Fiesta trim levels. What you get with each trim configuration.