2014 Ford Mustang Pros vs Cons. Should You Buy? 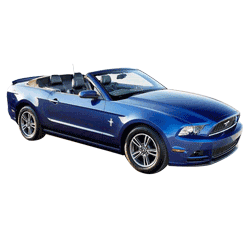 The Ford Mustang is one of America's great classic cars. The Mustang burst onto the automotive scene in 1965, and now that it's almost 50, it has retained its status as one of the most popular pony cars ever produced. After all these years it still has a reputation for having an attractive, unique look as well as being fun to drive. The following information provides a brief overview of the 2014 Ford Mustang, 10 reasons to buy the car, and a few reasons not to. [ For the 2015 model see - Ford Mustang Pros and Cons ]

Since the 2015 model is going to be completely redesigned, the 2014 Ford Mustang is virtually unchanged from the previous model. A few minor changes include the addition of new colors such as Red Metallic and Oxford White and the discontinuation of a few other colors. For the Mustang V6 Premium there are updated 17 inch wheels. The Shelby GT500 comes with heated front seats that are standard. Finally, the BOSS 302 has been discontinued.

1 It's a Gorgeous Sports Car
When it comes to purchasing a sports car, looks matter. The 2014 Ford Mustang still retains its classic look while adding a few new modern features. The overall shape, design, and exterior styling make the 2014 Ford Mustang one of the most recognizable and beautiful cars on the road.

2 It's Amazingly Fun to Drive
Having a good time behind the wheel is one of the primary reasons people purchase a sports car. Nimble handling and great overall performance make the Mustang a must-have for those who enjoy the journey as much as being there. The car is light and agile, making it irresistible on winding roads.

3 There's More Than Adequate Trunk Space
For a car this size, there's a fair amount of trunk room. The coupe provides 13.4 cubic feet of space in the trunk. This beats the Camaro, the Mustang's primary competition.

4 It's Got Power
The V-8, with 420 horsepower, has got the power and take-off speed that equals many higher priced sports cars. Traveling in a straight line, the V8 Mustang can reach 60 mph in 4.8 seconds. Edmonds clocked it at 4.7 seconds. This beats or equals some Camaro models. The V6 with the automatic made it to 60 in 6.8 seconds. Drivers looking for power can't go wrong with the 2014 Mustang.

5 There's a Price to Fit Every Budget
The MSRP ranges from $22,510 to $40,310. Just a few of the different models include the V6 Coupe, the V6 Premium, and the Shelby GT500. With such a wide variety of prices and styles, there's something to fit almost everyone's personality and budget.

7 Recaro Leather Seats
These manual leather seats are optional, but can make a big difference in the interior of the car. For those who decide to go ahead and make the splurge, a driver will experience comfort even after driving for hours.

8 Good Safety Record
The 2014 Mustang received above average marks for safety from the National Highway Traffic Safety Administration. Safety features in the car include airbags to the side of the front seats, stability control, traction control and antilock disc brakes.

9 Lots of Options
Although the Mustang comes with a lot of great standard features, there's still room for improvement. The V8 Mustang GT can be upgraded with Brembo brakes. A few other options include a powercode remote start system, over-the-top racing stripe, rear video camera, and a Shaker pro audio system.

1 Weak Interior
The overall interior of the Fort Mustang is lacking and might even be considered bland. Some reviews have called the interior cheap looking. With the seats as the primary exception, most everything else in the interior could use some improvement. It's an overwhelming array of black plastic.

3 2015 Overhaul
While there are a lot of good reasons to purchase the 2014 Ford Mustang, one of the best arguments against it is the anticipation of the newly designed 2015 model. Which one will ultimately be better is a matter of interpretation, but the excitement alone may be enough reason for some buyers to hold off and wait a year.

4 Tight Backseat
Drivers who are planning on transporting more than one other passenger at a time on a regular basis might think twice before purchasing the 2014 Mustang. It's simply not known for its roomy backseat.

5 Transmission Shifter Blocks Climate Controls
This may seem like a minor transgression, but after awhile it can become annoying. The climate controls are mounted low enough to make it a problem.

While there are definitely some drawbacks, the 2014 Ford Mustang offers a lot more to like than dislike. The Mustang is a vehicle that still lives up to its early reputation as a great all around sports car.

• 2018 Ford Mustang trim levels. What you get with each trim configuration.