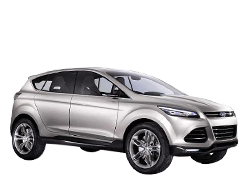 Should You Buy a 2015 Ford Escape? Here Are Some Reasons For and Against

Ever since it first hit the market in 2000, the Ford Escape has ranked highly among affordable compact SUVs. And with the overhaul of the interior and exterior design a couple years ago, Ford Escape has evolved from boxy and conservative to sleek and modern. However, the 2015 Ford Escape is far from the only option on the market for a consumer looking for a vehicle that doesn't sacrifice space or design for the sake of cost and efficiency. With that in mind, here are 10 reasons why you should consider buying the extensively redesigned 2015 Ford Escape, and also a few reasons why you shouldn't.

2. New Design. Instead of the mostly unappealing and somewhat ordinary boxy design the Escape had been known for previously, the 2015 Escape continues the more aerodynamic, streamlined crossover look that it adopted just a couple years ago and is reminiscent of the new design of the Ford Focus. The design of the new Ford Escape is absolutely gorgeous, much more car-like in appearance, and will be an important feature to many people looking for a compact SUV that's also stylish and sporty. Customers and critics alike have been impressed with the superior materials and build quality of the Escape's interior too, which gives the impression of being much more high-end and expensive.

3. Space. Riders will notice that space is much more generous, especially in certain areas of the new Ford Escape. Passengers sitting in the back seats have more ample legroom and the rear cargo space has been upgraded, making storage space comparable to that of more midsize SUVs. With the rear seats folded down, there's an impressive 68.1 cubic feet of rear storage.

4. Acceleration and Power. Test drivers have reported that, even with a four-cylinder engine and a 6-speed automatic transmission, the new Escape is surprisingly peppy. It has more than enough power to accelerate up steep hills without losing momentum.

5. Rearview Camera System. As a standard feature, the 2015 Ford Escape comes with a rearview camera system with a 4.2" screen to improve visibility and accuracy when parking or reversing the vehicle.

6. Several Trim Options. The new Ford Escape has three different trim options: S, SE, and Titanium. The Escape S, starting at $22,610, has a standard 2.5L I-4 engine. The SE version has a 1.6L EcoBoost engine, which combines turbocharging and direct injection to increase performance, and starts at $25,060. The Escape Titanium, starting at $29,020, has a 2.0L EcoBoost I-4 engine.

7. MyFord Touch. Available with the SE and Titanium trim packages (and many other Ford models), MyFord Touch is Ford's answer to voice-activated technology that allows drivers hands-free control of many of the Escape's functions so they can keep their hands on the steering wheel and eyes on the road. With am intuitive 8-inch touchscreen LCD, MyFord Touch has Bluetooth for pairing with a cell phone. Also included is hands-free climate control so drivers can adjust the temperature of the cabin with a simple voice command. With complimentary SYNC Services for a year, drivers will receive turn-by-turn directions, 411 business search, personalized sports scores, stock quotes and more, from the MyFord Touch system. It's a revolutionary, truly hands-free technology that will allow drivers to use all the gadgets the new Escape has to offer without sacrificing safety.

8. Foot-Activated Liftgate. Another convenient feature of the 2015 Ford Escape is the hands-free, foot-activated lifegate available on the SE and Titanium trim packages. As long as the vehicle senses the key close by, drivers with hands full of groceries or shopping bags can wave a foot beneath the rear bumper and have the Escape's rear door open for them automatically.

9. Four-Wheel Drive. Drivers in colder, more seasonal regions might prefer a Ford Escape with four-wheel drive instead of the standard front-wheel drive. Four-wheel drive is available on the SE ($27,300) and Titanium ($31,260) trim packages. Full-time intelligent all-wheel drive (AWD) is also an option.

10. Handling and General Performance. Despite being an SUV, many drivers compare the 2015 Ford Escape to a much smaller car in the way it handles and find that it very enjoyable to drive. Test drivers also reported that the ride was smooth and that the new Escape has very crisp, responsive steering.

1. Price. Though the new Ford Escape is marketed as an economical compact SUV, if a customer wanted to purchase an Escape with many of the available features, the final price could be close to $40,000. Instead of spending that on a fully-loaded compact SUV, it might be make sense to consider midsize SUVS in that price range.

2. Front Seating Space. According to test drivers, although the new Ford Escape is roomier in many areas, the driver and front-passenger seats are not among them. Some have even complained that the way the dash is designed causes it to rub against the driver's legs while driving.

3. Complex MyFord Touch Interface. Though many are raving about the MyFord Touch hands-free controls, some have complained that it isn't very user-friendly and can be quite complicated and confusing to use.

4. Few Interior Storage Compartments. Many test drivers and reviewers have said that the new Ford Escape lacks the storage compartments or "cubbies" that a lot of the competition has.

Conclusion
The 2015 Ford Escape consistently ranks in the top compact SUVs, and its easy to see why. Distinguishing itself from the competition with a sleek and athletic look, expanded storage capabilities, and higher-end interior styling, the new Ford Escape is a strong contender for a fuel-efficient compact SUV.
2018 Ford Escape Buying Guide: