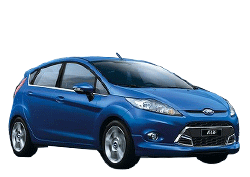 Should You Buy a 2015 Ford Fiesta? Here Are Some Reasons For and Against

The 2015 Ford Fiesta helps shift the notion that a small-car has to be in some way a shortchanged, budget conscious version of a higher category vehicle. It expands the notion of the value that a small car has on the mind and soul of the consumer, by offering a lavish, sporty, and almost daring feel that still manages to be warm and comforting as well.

In 2014, the Fiesta was significantly updated in its design, bringing not only a grille that is aligned with Ford's overall design principles, but a hint of sophistication as well. It was also outfitted with a host of interior updates in finishing, and a dashboard that manages to be very well-layed out. Two models were added including a 3-cylinder SFE manual transmission model, and a 'hot hatch' in the Fiesta ST.

2015 updates include comforting new fabric and a new eight-spoke wheel design, as well as a few new metallic color options.

Bang for the Buck

With an MSRP starting at just $14,355, the Ford Fiesta provides a very economic, feature-rich alternative to not just other budget cars, but cars several thousand dollars higher.

The lavish interior design options, including premium leather upholstery, is not too common in cars of this price range. However, the Fiesta offers drivers and passengers a snazzy, if not fully luxurious, feel while enjoying a ride through the city or country.

With Bluetooth, USB, Ford voice-activated Sync, and optionally the MyFord Touch infotainment system, in addition to a host of other power features and options including a rearview camera, the 2015 Ford Fiesta provides a variety of features and options that normally only higher priced cars can provide.

While design tends to be a personal preference, few can argue against the Ford Fiesta being an incredibly beautiful vehicle. From its raised grille, to its elongated body shape, to its blending of modernity with a classic expression of confidence, the Fiesta is a pleasure to look at, feel, and grasp while driving.

No, the 2015 Ford Fiesta isn't a sports car, nor does it try to pretend to be one. However, the standard 3-cylinder model, as well as the 120-hp 4-cylinder model, is truly competent for such an economical price tag. There is power throughout the entire rev range, and a force that one simply might not expect at such a price-point.

The manual transmission model has exemplary acceleration, nimble shifting, and excellent fuel economy, providing an all too uncommon driving joy in a budget-conscious, subcompact package.

The inside of the vehicle is quite sound-proof, and the suspension provides a consistency and calm found in higher end luxury vehicles.

If one could sum of the experience of driving the 2015 Ford Fiesta in a variety of conditions, it would be poise. Whether going up or downhill, or meandering through a windy road, the level of balance and grace, as well as feedback to the driver, is both notable and smooth. There isn't any special features to describe regarding its suspension system, except that it simply is very well tuned, and quite noticeable in this fact. There is a feeling of being centered while driving the vehicle, which simply doesn't let up in different environments.

The Recaro seats in the hot hatch model, with an optional kit & natch, are incredibly supportive and fitting, putting the front driver and passenger in a mode to fully experience the pleasure of going for a drive. The chairs point to the special place, and unique joy, that the act of driving has in life. This is a place that goes well beyond simply the practical purpose of sitting while the vehicle goes from point A to point B.

Cargo space is certainly large for a subcompact, and provides a solid 12.8 cubic feet of trunk space in the basic model, with 14.9 cubic feet / 25.4 expanded cubic feet for the hatchback model. That said, there are caveats (mentioned later).

5 Reasons Not to Consider the 2015 Ford Fiesta - The Cons

While the 2015 Ford Fiesta has a variety of notable qualities, there are a few areas that consumers should take heed in.

As mentioned above, while cargo space is certainly large considering the size of the vehicle, it does require a disclaimer: It isn't large in an overarching sense, and the rear seats don't fold down 180 in the hatchback model. Further, the cargo space is narrow in its dimensions, limiting the type of items transportable within.

While there are a variety of premium and premium-feeling components within the interior of the vehicle, it is important to note that there is a sea of black plastic surfaces as well throughout the cabin.

The front seats are by-and-large very comfortable. However, the back seats are somewhat tight for 3 people, even when allowances are made for its category as a subcompact vehicle. Legroom in the back tends to be quite limited as well.

While Ford does offer an upgraded audio package, the base model's audio system can be a bit confusing, especially when setting up Bluetooth controls. While it is a boon that even the base vehicle actually does have sophisticated audio features, the technical complexity does inhibit the plug-and-drive joy that could otherwise arise from having higher-end audio controls.

The 2015 Ford Fiesta is certainly far more budget-friendly than many of its rivals such as the 2015 Mini Cooper or Fiat 500, while holding up not just well, but to many tastes feeling even superior, in design and flair. While it is not as powerful in terms of horsepower as many of its peers, it makes up for this in its robust, well-tuned presence.

The 2015 Ford Fiesta is a wonderful vehicle, continuously calling out to the buyer a variety of features and functions that place it within a

higher category. The style, the polish, the design, and the nimbleness of the vehicle give it the feel of both luxury and sportiness, at a budget price. That said, it perhaps highlights its shortcomings not because it has any glaring omissions or blinding oversights. Rather, its main caveat is that a consumer might not perceive it as a budget subcompact, and thus might have significantly higher expectations. If its actual class is clear in the minds and hearts of a potential purchaser, the 2015 Ford Fiesta will very likely be a joyous purchase and a joyful experience.

• 2018 Ford Fiesta trims. What you get with each trim configuration.