2015 Ford Mustang Pros vs Cons. Should You Buy? 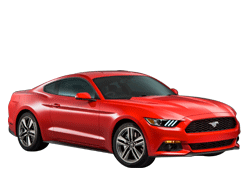 Should You Buy a 2015 Ford Mustang? Here Are Some Reasons For and Against

Ever since it started cruising the neighborhood five decades ago, the Ford Mustang has been among the most popular of sports car. It has starred in movies and inspired songs. Its classic good looks and vibrant colors have long appealed to those in search of an affordable and hip sports car. And Ford has given its beloved pony car a major redesign in honor of its 50th birthday.

The 2015 mustang underwent plenty of changes for its milestone anniversary. It offers better handling, a more classic design, and three engine sizes. It looks different on the outside and the inside. It comes with lots of luxury features and upgraded technology to help make the trip smoother and more enjoyable

When it comes to a sports car, good looks are a must. And the 2015 Mustang has them with the return to its classic fastback build. The new Mustang is wider and sits lower to the ground. The adjustments to its outer appearance have made it more aerodynamic without subtracting from its beauty.

When it comes to choosing between power and practicability, the 2015 Mustang will not disappoint consumers. The new Mustang is available in three engine styles, which offer something for everyone. It comes with a V8 for those who love power, a V6 for those who like something in the middle, or a new fuel-efficient turbocharged four-cylinder engine for those who want to save money.

The redesigned Mustang hugs the road and gives drivers better control. It steers more precisely and is more stable during braking and acceleration. And with the addition of independent rear suspension, the ride is smoother on bumpy roads.

It is all about the driving, and the redesigned Mustang lets drivers choose among four driving settings at the flip of a toggle switch. Drivers can choose from the options of normal, snow/ wet, sport, or track. The car adjusts its handling and response for the selected driving mode and gives the driver better control in a variety of situations.

The redesigned Mustang makes it easier to get into the car and to start it, too. Its optional intelligent access feature lets drivers open the car door with the touch of a handle when they have the key fob in their pockets. Once inside, drivers can start the car with the push of a button.

The new Mustang offers safety features that can help drivers avoid accidents. It comes with forward collision warning and brake support that can notify drivers if it senses a potential collision with the car in front of them. If drivers do not respond in time, the brakes will pre-charge and provide full responsiveness when the driver does step on the brake. Consumers also have the option of a blind spot information system that uses radar to detect vehicles in the driver’s blind spot.

The redesigned Mustang offers 10 color choices, and drivers are sure to find one that suits their styles and personalities. Along with the basic white, black, gray, and silver colors, the Mustang comes in orange, yellow, and two shades of red.

The 2015 Mustang’s revamped cockpit offers drivers a more comfortable and convenient ride. The driver’s seat sits lower, and the new steering wheel is smaller, tilts, and telescopes. The cup holders have been relocated outside of the path of the shifter.

With all its revamping, the new Mustang still has a small backseat. It might not be the best choice for those who may need to transport more than one passenger. While the backseat will hold two passengers, larger individuals may feel uncomfortable and cramped.

Like its predecessors, the 2015 Mustang has rear-wheel drive. It may not be the best choice for those who drive often in snow and inclement weather where a front-wheel drive vehicle might be a better choice.


How the 2015 Mustang stacks up to the competition

The new Mustang holds its own against its usual competitors – the Dodge Challenger and Chevrolet Camaro.

While the Mustang, Challenger, and Camaro have many of the same features, only the Mustang offers a fuel-efficient four-cylinder engine and a standard backup camera.

The Mustang also is the only one of the three that has undergone a major redesign for 2015. The Challenger and Camaro underwent some changes for 2015, but the upgrades were not nearly as drastic as those of the Mustang.

The Mustang further consistently received a higher ranking among critics than either the Challenger or the Camaro.

Overall, the 2015 revamped Mustang is a great car for those who are looking for an affordable sports car. Its impressive upgrades, good looks, and luxury options offer something for every driver. And its enhanced performance makes it a fun car to drive.