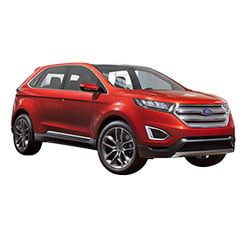 Should You Buy a 2016 Ford Edge? Here are the Pros and Cons

The 2016 Ford Edge received a few new tech and convenience-based changes. In this year’s midsize SUV, Ford offers a new optional infotainment system. The 2016 Sport model features the handy hands-free power lift gate and all-wheel drive while every trim now comes with keyless entry. Those who are shopping for an SUV should consider the following ten reasons to buy this year’s Ford Edge before selecting their next vehicle.

1) Its Size is Just Right

The Ford Edge is aptly named since its size edges it between the Explorer and the Escape. With the Edge, car buyers will have a nicely sized two-row SUV that provides plenty of interior space. Its size makes it easy to park and maneuver on the roadway. The vehicle’s tight handling comes from a few adjustments that Ford made in 2015. In particular, the car company modified the SUV’s suspension and body structure.

2) The SUV is Technically Inclined

For the 2016 Edge, Ford decided to offer an updated infotainment system called the Sync 3. The new version comes with touchscreen technology and a better interface. Additional tech features include:

Ford also upped the ante on the vehicle’s available tech features. Car buyers can enhance the SUV with:

Once settled in the driver’s seat, car buyers will be greeted with quality interior materials. The doors, dashboard and center console, feature comfortable materials that are soft to the touch. SUVs equipped with the Sync 3 infotainment unit exhibit a stylishly sleek interface. The cabin area is roomy, and it provides plenty of interior space for every passenger. In the front seat, occupants will enjoy bucket seats that are supportive while the rear seats include enough legroom for adults.

4) It Has Plenty of Juice Under the Hood

The vehicle’s standard engine is the 2.0-liter turbocharged inline 4-cylinder. The motor features EcoBoost technology, and the carmaker paired it with a six-speed shiftable automatic transmission. This motor gives drivers 280 horsepower and 250 pound-feet of torque. When it comes to fuel economy, the 2016 Edge gets 20 miles per gallon in the city and 30 miles per gallon when drivers take long road trips at highway speeds.

With its five-star overall government crash test rating and score of “Good” from the Insurance Institute for Highway Safety, the 2016 Edge is designed to keep people safe. It comes with standard safety features like:

7) It Has Cargo Space

The 2016 Ford Edge offers 39.2 cubic feet of cargo area with the rear seats up. When the seats are folded down, the space extends to a handy 73.4 cubic feet of room. This places the SUV close to the top of its category in this area.

8) Its Trim Options are Extensive

For the 2016 Ford Edge, four trim options are available. They include the SE, SEL, Sport and Titanium. Standard options for the SE range from 18-inch alloy wheels to reclining rear seatbacks. In the SEL, car buyers receive rear parking sensors and a higher grade of cloth upholstery. For the Sport model, Ford added ventilated front seats and a power-adjustable steering wheel. With the Titanium, car buyers will receive heated seats and a panoramic sunroof.

According to reports, the Ford Edge is a reliable vehicle. The 2007 and 2008 models did suffer a few transmission issues. Also, the first MyFord Touch system had several glitches, but Edge owners are happy with their vehicles and report few mechanical problems.

When driving the 2016 Edge, car buyers are likely to notice its responsive handling. In fact, testers report that it offers a sedan-like driving experience. It manages corners well since it doesn’t lean. The vehicle is also well insulated as it quiets road and wind noise.

11) It Will Inspire Feelings of Jealousy in Others

With its contoured exterior styling and chrome finishes, the 2016 Ford Edge is as exhilarating to look at as it is to take on road trips. Smooth lines and a distinctive grille will keep the SUV looking stylish for many years.

Despite the vehicle’s many features, there are a few reasons to reconsider purchasing it. Reasons to rethink buying the Ford Edge range from problems with acceleration to a standard infotainment unit that suffers from several glitches.

Although the 2016 Ford Edge has enough power for a midsize SUV, However, it is outperformed by its competition. For instance, the Nissan Murano reaches 60 miles per hour a few seconds faster than the Edge.

2) Its Auto Park Feature is Slow

While handy, the vehicle’s parking assistance technology is slow. This feature parallel parks the car. According to vehicle reviewers, other car companies have technology that does it faster.

3) Its Transmission is Hesitant

One area of complaint is that in the 2016 Ford Edge, the transmission could downshift a little sooner when the driver needs more power.

The standard infotainment system is still a little buggy and prone to Bluetooth connectivity problems. Because of it, the systems made by other auto companies outperform it.

How Does It Compare?

When comparing the 2016 Ford Edge to other vehicles in its class, it tends to come out in the middle of the pack. For instance, the Chevy Equinox has better fuel economy numbers, but the Edge outperforms it in acceleration. When evaluating the SUV against the Lincoln MKX, Edge buyers can choose from three different engines while Lincoln only offers two. However, the MKX has a few more luxury features than the Edge. For instance, the MKX can be equipped with a 360-degree camera and 13-speaker sound system.

With the 2016 Ford Edge, car buyers will have a vehicle in their garage that combines a comfortable driving experience with a stylish exterior. Its ideal size and useful features make the Edge a vehicle that people will want to own for years.

• 2018 Ford Edge trims. What you get with each trim configuration.