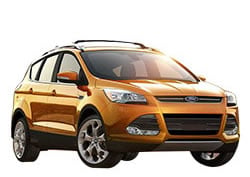 Should You Buy a 2016 Ford Escape? Here Are Some Reasons For and Against

IOver the years, the Ford Escape has gradually climbed to the top of its class. The 2016 Ford Escape is definitely one of the best small SUVs on the market. While the base engine is a good choice for budget-minded drivers, the higher-powered turbo engine transforms the Escape into a very quick SUV. However, all versions of the Escape are easy on gas. For the drivers who are seeking a stylish ride, they will certainly find the Escape’s sporty design to be very appealing.

There are a few significant changes for the 2016 model year. A Cold Weather package is now being offered, which is good news for the drivers who will experience frigid temperatures. A brand-new Sync 3 infotainment unit will also launch in the 2016 Ford Escape.

The base Escape is designed for the drivers who want to save the most possible money. However, it does come equipped with ample features. Its 168-horsepower engine delivers a punchy performance while returning 31 mpg. Some of the other noteworthy goodies include a six-speaker sound system, cruise control, and Ford’s nifty “MyKey” system.

To give buyers an even better blend of performance and efficiency, Ford now offers a 1.6-liter EcoBoost engine. Despite the engine’s small size, it can still push out a capable 178 horsepower and 184 pound-feet of torque. Not only is this engine quite potent, but it also delivers a tad bit better fuel economy than the base motor.

Prospective buyers who crave more performance should check out the 2.0L EcoBoost motor. The turbocharged four-cylinder can produce a muscular 240 horsepower and 270 pound-feet of torque. Due to the engine’s high torque output, the SUV’s towing capacity rises to 3,500 pounds. In terms of acceleration, this model can keep up with many of today’s sport coupes.

Most drivers will be perfectly content with the standard FWD system. On the other hand, drivers who need to travel in the snow will need the Intelligent AWD system. While the Escape it not an extremely rugged SUV, it can handle a light-duty trail .Even when equipped with an AWD package, the Escape can still average about 29 mpg on the highway.

Drivers will grow fond of the Escape’s responsive performance of the road. Although a sports-tuned suspension is not available, the standard shock absorbers do a good job of keeping the SUV well-planted. Luckily, the ride quality remains comfy. Due to the preciseness of the steering system, the driver will feel in control at all times.

The FWD Escape is especially good on gas. All of the FWD models deliver at least 31 mpg on the open road. Furthermore, the available engines only require regular unleaded fuel. While most owners will use their Escape as a daily-driver, the SUV is also a good option for taking a road trip.

The Escape’s high-quality interior is a step above a lot of its competitors. The easy-to-use control layout makes the Escape a pleasure to drive. To provide the utmost comfort for the rear passengers, Ford designed the backseat with a reclining function. If the driver needs to store a lot of extra stuff, the rear seats easily flip down to offer 68 cubic feet of cargo space.

Understandably, a lot of parents are concerned about their child’s well-being. When it comes time for a teenager to get behind the wheel, Ford’s MyKey system will give parents a bit more say-so. Not only can parents limit the SUV’s top speed, but they can also prevent their child from texting while driving.

The 2016 Escape will be one of the first vehicles to feature Ford’s new Sync 3 infotainment system. Based on the feedback from several car reviewers, the new unit is far better than its predecessor.

Loaded with several high-tech features, the Titanium model is clearly the most luxurious trim. This model comes standard with a high-powered Sony sound system, a hands-free lift-gate, and leather upholstery. The Technology package brings even more innovation, including a self-parking system and a blind-spot monitor.

In contrast to SUVs such as the Jeep Cherokee, the new Escape does not offer an off-road package. Although the Escape can be taken on a dirt road, it cannot withstand an extreme environment.

Very few people will complain about the amount of passenger room in the new Escape. However, it is important to note that some of the competition does offer a tad bit more space.

Expect to pay in excess of $38,000 for the top-of-the-line Titanium model. While the Titanium model is loaded with goodies, it costs nearly $15,000 more than the base model.

How the 2016 Escape stacks up to the competition:

Some of the key players in the small SUV segment include the Mazda CX-5, the Honda CR-V, and the Toyota RAV-4. While the competition brings a lot to the table, the Escape’s well-rounded package helps it to stand out. It is also very stylish.

• 2018 Ford Escape trim levels. What you get with each trim configuration.