2016 Ford Expedition Pros vs Cons. Should You Buy? 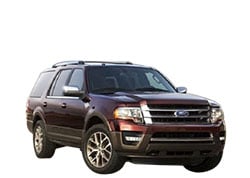 Should You Buy a 2016 Ford Expedition? Here are the Pros and Cons

The 2016 Ford Expedition is Ford's latest entry in the large SUV segment. It is not a major redesign of the model, but this year Ford has added some new features and options that make the care a more attractive buy. In this article, we will discuss ten of the best reasons to buy the 2016 Ford Expedition along with a few reasons to avoid it, and then compare the car to its main competition.

New in 2016
This design has been part of the Ford core line since 2011, so it should be no surprise that there are no big changes. The main improvements are to the infotainment system and the optional packages. If you found the old system frustrating or inadequate, then the 2016 Ford Expedition is just the car for you. Ford has also revamped the engine somewhat, delivering the same ability to tow and pull but with a little more fuel efficiency.

The 2016 Ford Expedition offers a great driving experience because it stays smooth in any conditions. That is a big deal for such a large vehicle, especially one that you will likely take in snow, over ice, and on inclines.

The 2016 Ford Expedition has three full rows of seats and can seat eight adults. There is plenty of leg room and the seats are comfortable even when the car is fully loaded. That space can also be used for cargo if there are empty seats.

One of the strongest points of the 2016 Ford Expedition is the infotainment software. With full smartphone integration, the system is quite robust, and optional voice controls add to the functionality. The standard touchscreen is 4.2 inches, and that can grow to 8 inches with options.

The standard rear camera is an amazing safety feature that makes getting into and out of packing spaces far easier. Once you start driving with a rear camera, you will not want to go back.

The standard cargo availability is fairly average in the basic configuration, but the third row has power folding, which opens up a lot more space. The EL trim adds much more cargo space for those who need it.

The iconic Ford body, mixed with the strong front end and grille, give this car a great exterior design. It balances aesthetics with a function to deliver a car with real presence in any color, although the green and red tend to be the most striking.

The 2016 Ford Expedition gets 16 MPG in cities and 22 on highways, which is about average for a car in this segment. But that comes with the ability to tow nearly ten tons, and the combination of efficiency and power is unmatched among rivals.

The 2016 Ford Expedition comes with a sizable selection of trims- eight in all. They have a diverse array of features, from extra space to more luxurious design. That, combined with the options and packages, makes it fairly easy to find exactly the right Expedition for you.

One of the biggest recent changes to the Expedition line is swapping out the old V8 engine for a V6 that delivers just as much power with better efficiency and lower weight. That is what underpins the smoothness of the driving experience and the better mileage. The 2016 Ford Expedition is not nearly as efficient as smaller cars, but it is trending in the right direction without sacrificing the power it needs to perform its core role.
Buying Tip: To avoid overpaying on a new car, shop prices online first. Get up front pricing before you walk into a dealership. We recommend the following free services; Car Clearance Deals, NADAguides, CarsDirect & Motortrend.
These free services will offer you the lowest prices and supply you with multiple competing price quotes. You will know the best price before you visit the dealer.

Reasons Not to Buy a 2016 Ford Expedition – The Cons

The interior is an odd mix of materials that make it look like Ford decided to go cheap partway through the design process. It detracts from the experience by undermining the car's apparent value.

The 2016 Ford Expedition lacks in precision when it comes to steering in small spaces. That can be irritating in some situations, like parking. It is a big vehicle, so it is hard to avoid this problem, but it gets irritating depending on where you leave your car at night.

Considering that the core design first came on the scene in the 2011 model year, it would be nice to see Ford put a little more into the car now that the design is getting older. Yes, there are changes under the hood, but a better touchscreen by default and some nicer packages would be good to see. For example, a parking assist feature would help with the tough maneuvering.

The 2016 Ford Expedition is up against other large SUVs like the Chevy Suburban and the Dodge Durango. Its new engine gives it a distinct edge over those vehicles, which can offer only a more complete interior and tend to fall short in power, efficiency, or road feel.

The 2016 Expedition does not bring massive changes to the table, but the new infotainment system and the new engine are certainly appealing reasons to buy it over the 2015 model. Fans of this car will be happy with the latest version, and any failings are unrelated to its core role.

• 2018 Ford Expedition trim levels. What you get with each trim configuration.