2016 Ford Explorer Pros vs Cons. Should You Buy? 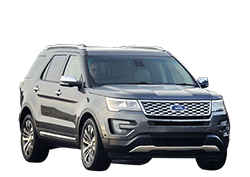 Should You Buy a 2016 Ford Explorer? Here Are Some Reasons For and Against

While there have many SUVs to come and go over the years, the Ford Explorer remains a top contender. Designed with an upscale cabin, the 2016 Ford Explorer is among the most luxurious SUVs in its class. While the base model will suit most drivers, the top-of-the-line Platinum model comes strapped with a long list of extravagant features. With the arrival of a new turbocharged engine option, drivers will be able to save a lot of extra fuel. As expected, Ford also offers a surplus of advanced safety features for the new Explorer.

Top Ten Reasons to Buy a 2016 Ford Explorer - The Pros

The 2016 Ford Explorer can now seat up to seven passengers. Instead of taking separate vehicles on a road trip, the entire crew will be able to ride comfortably in the Explorer. Unlike some of the competition, the Explorer’s third-row seat actually offers enough room for adults. When the rear seats are folded away, drivers can also haul a variety of different items in the back.

Drivers who need extra traction can depend on Ford’s Intelligent AWD system. The traction-enhancing AWD system comes standard with a Terrain Management system. Drivers can adjust the AWD settings according to the specific driving environment. While some drivers may need the “Snow” setting during the winter, the “Mud” setting enables the SUV to topple off-road trails with ease.

Prospective buyers can opt for a new 2.3-liter, turbocharged four-cylinder engine. It pumps out a muscular 270 horsepower and 300 pound-feet of torque. Generating significantly more torque than the base engine, the turbocharged four-cylinder engine delivers a great balance of power and efficiency. Although the official gas mileage ratings have yet to be released, it will be the most fuel-efficient engine in the lineup.

In the eyes of most automotive critics, the 2016 Ford Explorer’s interior is quite a bit better than the outgoing model. Instead of using touch-sensitive controls, Ford designed the cabin with traditional buttons. This means that the new Explorer is more user-friendly than some of its rivals. Drivers will also love the appearance of the high-tech gauge cluster.

Not everyone wants their SUV to handle like a truck. Fitted with a performance-tuned suspension system, the Sport is designed to appeal to driving enthusiasts. A set of 20-inch performance tires further improve the SUV’s handling. The potent 3.5-liter EcoBoost engine comes standard. From a performance perspective, the Explorer Sport is clearly the most exciting model.

Even the base model comes equipped with a rear-view camera system. However, the list of advanced safety features grows on the higher trim levels. An exclusive front-view camera system helps the driver to easily navigate in cramped parking areas. Some of the other advanced safety features include a blind-spot warning system, Active Park Assist, and a lane-departure warning system.

While the ultra-luxurious Platinum model costs more than $53,000, the base model is priced at $31,500. Despite the base model's affordable price tag, it still brings a lot of goodies to the table. Some of the standard features include LED headlights, an automatic washer for the rear-view camera, Ford’s superb Sync infotainment system, and a quality audio system.

Ford has truly succeeded in refining the Explorer’s design. The SUV’s bold front fascia and prominent body lines give it a very muscular appearance. While all of the trims are attractive, the Sport model stands out with its blacked-out grille and special body kit.

Prospective buyers can opt for several high-tech components. The hands-free lift-gate will certainly come in handy when unloading groceries. Meanwhile, kids can take advantage of the rear entertainment system. Some of the other goodies include ventilated seats, navigation, and a high-end Sony sound system.

The 2016 Explorer is larger than ever before. While its increased size has plenty of advantages, some drivers may prefer a more compact SUV.

In exchange for the extra power of the EcoBoost V-6 engine, drivers will suffer a bit of efficiency. The city fuel economy rating is a sub-par 16 mpg.

Expect to pay over $55,000 for a fully-equipped Platinum model. The cost could be a concern for some car shoppers.

For good reason, the Ford Explorer has remained relevant for more than 20 years. The arrival of a turbocharged four-cylinder engine promises even better fuel efficiency. Drivers who desire sedan-like handling should consider the nimble Sport model. While the base model offers luxury at a bargain price, the higher trim levels boast several high-tech goodies. Very few seven-passenger vehicles bring this much versatility to the table.

• 2018 Ford Explorer trim levels. What you get with each trim configuration.