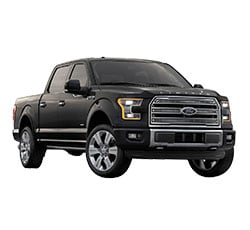 Since the 1970s, the Ford F-150 has been a best-selling truck in the United States. For 2016, the F-150 is a "do anything" truck for designed for both personal and business use. From making a quick pickup at the grocery store to hauling a heavy construction trailer, the F-150 is known for its reliability and durability.

For the V8 engine, a prep package for after-purchase conversion to natural gas or propane is new. The 2016 F-150 also has a Sync 3 infotainment system, and the XLT trim package now comes with upgraded wheels and a special edition option. There is also a new option for trailer backup assist, which greatly simplifies the process of hitching a trailer. Although there were no major structural changes for 2016, the Ford F-150 was fully redesigned in 2015.

The 2016 F-150 comes with several engine options. While there are four types available, the 2.7-liter EcoBoost V6 engine is the top choice for better gas mileage. For power, the 5.0-liter V8 is the engine of choice. For buyers who want something between those two options, a 3.5-liter or 3.7-liter V6 engine is available. Ford uses its reliable technology and tested techniques for making high-quality engines.

While the new aluminum body may hint at the use of less steel, the 2016 F-150 has more high-strength steel than older models with steel bodies and frames. The steel was put into the underbody structure to improve crash protection.

For a full-size pickup, the new Ford F-150 has good gas mileage. It scored an average of 26 mpg on the highway and 19 mpg in the city with the new EcoBoost engine. These numbers were slightly lower when the truck was carrying heavy loads. Its lighter aluminum body also contributes to better gas mileage.

Surround cameras give better visibility of blind spots, and parallel parking assist automatically detects open parking spots as the truck drives past them. It also turns the wheel correctly to help the driver maneuver into the spot while he or she only operates the gas and brake pedals. The F-150 was the first truck to provide parallel parking assist.

The Lariat and Platinum trim packages have a more upscale interior appearance. Multi-colored leather seats come standard with the Platinum version to give it a stylish look and several safety features that may reduce insurance rates come standard. Adaptive cruise control and power-deployable running boards are just a couple examples of what is included. For the Lariat, temperature-controlled seats with leather trim come standard, and the fuel-efficient EcoBoost engine is also standard.

The 2016 Ford F-150 comes with an automatic 6-speed transmission. Ford trucks are known for their long-lasting transmissions. Drive configurations of 4x4 and 4x2 are both available. This applies to all four of the engine options.

For the 2016 model year, the NHTSA gave the Ford F-150 five stars for overall safety, front crash and side crash tests. However, it received four stars on the rollover safety test. The 2016 Ford F-150 also earned good ratings from the IIHS for all of its Top Safety Pick standards. Since the IIHS recently raised the bar for their standards again, this is good news for drivers who are searching for a safer truck.

In comparison with its rival trucks of similar size and features, the 2016 Ford F-150 has a simpler cabin. The base model comes with only an AM/FM radio and a smaller 4.2" entertainment display. The boxy appearance and cloth seats may not appeal to some drivers. However, the Platinum, King Ranch, and Lariat packages provide more appealing aesthetics in the cabin.

Many drivers reported sensitive brakes in the 2016 Ford F-150. If the pedal was deployed considerably instead of lightly tapping it, the truck braked hard enough to lurch forward. Some drivers also complained of a sensitive steering wheel.

For drivers who expect ride quality similar to Cadillac, the 2016 F-150 may not be the best choice. In comparison with the Titan or Ram, the F-150 offered a somewhat lower ride quality. The quality is closer in similarity to a Tacoma.

The 2016 Ford F-150 can be good or bad for towing. However, this depends on the engine choice. Drivers who chose the new fuel-efficient EcoBoost V6 engine reported less towing capacity for the F-150. For drivers who need to tow heavy loads weighing more than a few tons, a V8 engine is a better choice.

For an F-150 that is fully loaded, buyers could end up paying about $60,000. This truck may not be the best option for people who want to pay less than $50,000 while enjoying better technology and more luxurious features.

How It Stacks Up to The Competition

The F-150's closest competitors are the Chevy Silverado 1500 and the Dodge Ram 1500. While the driving experience is mostly similar among these trucks, the Silverado has a more intuitive infotainment system. It also comes with more standard interior features. The Ram has a diesel engine option and also has easier-to-use features. However, the reliable engine, fuel efficiency, good handling and parking assist features of the F-150 are hard to beat.

For buyers who want a truck to drive in the country or in the city without paying a fortune for gas, the 2016 Ford F-150 is an excellent choice. It is still the go-to choice for drivers who need a good truck without a long list of non-essential features.