2016 Ford Fusion Hybrid Pros vs Cons. Should You Buy? 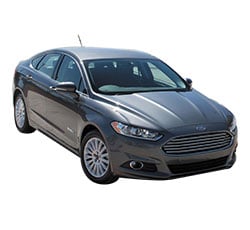 Should You Buy a 2016 Ford Fusion Hybrid? Here Are Some Reasons For and Against

When hybrid cars first hit the market, not everyone was impressed. However, the 2016 Ford Fusion Hybrid proves that hybrid vehicles have come a long way. The sedan’s refined appearance and jaw-dropping fuel efficiency should appeal to a lot of car shoppers. While all of the trims come well-equipped, the Titanium trim is by far the most luxurious. On the road, the Fusion Hybrid’s performance is far from being weak. A five-star safety rating sweetens the deal.

The new Fusion Hybrid has not received very many changes. In an effort to make the base S model even more appealing, it now features a more powerful audio system.

The number one reason that people purchase a hybrid is for the extra gas mileage. Luckily, the new Fusion Hybrid does a great job of sipping fuel. When traveling on the highway, drivers can expect to get 41 mpg. However, the sedan can deliver a super-impressive 44 mpg when cruising around the city.

Supported by a lithium battery pack, the Fusion’s hybrid engine delivers a quite energetic performance. The four-cylinder engine combines with an electric motor to pump out 188 horsepower. When the driver really puts their foot into it, the sedan can surge past slow-moving traffic with ease. A CVT transfers the power to the front wheels.

Most drivers will be very impressed with the Fusion Hybrid’s handling. When encountering a sharp turn, the sedan feels buttoned down at all times. The steering system also provides the driver with a lot of confidence. Even without the aid of a sports-tuned suspension, the car performs far better than some people may expect.

When traveling on the open road, the engine hardly makes any noise. Even when pushing the throttle while accelerating, the engine still barely raises its voice. Extra insulation also minimizes the amount of road noise. The Fusion Hybrid’s quiet ride makes it an excellent choice for traveling. Children will quickly fall to sleep on long journeys.

The base S trim is the least expensive version of the Fusion Hybrid. Fortunately, buyers do not sacrifice much luxury at all. While the dual-zone climate control system enables everyone to remain comfortable, the six-speaker sound system livens up the mood. Some of the other features include Bluetooth technology, a Sync voice command system, a rear-view camera, and an iPod hookup.

Passengers will find the sedan’s cabin to be very accommodating. Everyone will have enough room to ride with a bit of freedom. Although the sedan’s battery pack rests under the trunk, the Fusion Hybrid still offers a usable 12 cubic feet of cargo space. Unlike the Accord Hybrid, the Fusion has a folding rear seat.

In comparison to the gas-only Ford Fusion, the hybrid model looks virtually the same. The sedan’s gaping grille and angular headlights give it a very distinctive appearance. Drivers who desire a bit more sportiness can opt for the Appearance package, which includes a spoiler and a set of fog lights. Stunning paint colors such as Ruby Red accentuate the sedan’s design.

The Fusion Hybrid’s five-star safety rating gives it a big advantage over several sedans. While even the base S model features a rear-view camera, the higher trim levels boast even more high-tech safety equipment. As soon as an oncoming vehicle approaches the Fusion’s blind-spot, the side-view mirror will begin to light up. Parking sensors and a lane-keeping system are also available.

The various trim packages offer a substantial number of high-tech components. Even the mid-level SE model is available with a MyFord Touch infotainment system. For the drivers who love listening to music, the thumping Sony audio system will keep them entertained. Some of the other innovative goodies include adaptive cruise control and a ParkAssist system.

For about $26,000, car shoppers will be getting a great hybrid sedan. The fuel-savings make it an even better bargain.

Most people will be very content with the smoothness of the standard suspension. However, some driving enthusiasts may prefer the sportiness of a stiffer suspension setup.

2) Less Powerful than the Turbocharged Fusion

With a total output 240 horsepower and 270 pound-feet of torque, the 2.0L turbo engine makes the regular Fusion a quick performer. Although the Hybrid model offers brisk acceleration, it cannot keep pace with the turbocharged version.

Although the MyFord Touch infotainment system has improved, it still needs a tad more refining. Some users have complained about the system’s slow responsiveness.

Some of the key competitors include the Honda Accord Hybrid and the Toyota Camry Hybrid. While both of these rivals offer similar gas mileage, the Fusion is a bit more stylish. Numerous automotive reviewers have complimented the Fusion Hybrid on its show-stopping appearance. Although the Hyundai Sonata Hybrid is a great alternative, some car shoppers may prefer the Fusion's interior.

With an average price of about $31,000, even the top-of-the-line Titanium model is considered to be a great deal. The sedan’s excellent fuel economy and posh interior will intrigue a significant number of drivers. Due to the its well-built chassis, the Fusion Hybrid was also stamped with a five-star safety rating.
2016 Ford Buying Guides:
• 2016 Ford C-MAX Pros VS Cons