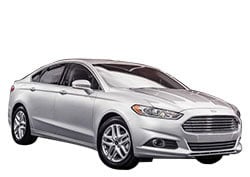 Should You Buy a 2016 Ford Fusion? Here Are Some Reasons For and Against

The Ford Fusion has quietly become one of the most sought-after family sedans on the market. With a starting price of less than $23,000, the base S model is a very economical option. Even the AWD models deliver over 30 mpg on the open road. Not only does the new Fusion have one of the best safety ratings in its class, but it is also available with a potent EcoBoost engine. All versions of the new Fusion look extremely dashing.

Ford did not make very many changes at all to the 2016 Fusion. However, an available Appearance package adds a tad bit more flair to the SE trim. On the inside, drivers will benefit from controls that are easier to use. A manual gearbox is no longer available.

While some sedans are equipped with a relatively underpowered base engine, that is not the case with the new Fusion. The four-cylinder engine pulls very hard when needed. With total output of 175 horsepower and 175 pound-feet of torque, the Fusion never feels weak at any point. In terms of efficiency, drivers can bank on getting 34 mpg on the highway.

To get the best possible fuel savings, buyers should opt for the 1.5L EcoBoost engine. When fitted with the available engine stop-start system, the four-cylinder can average an outstanding 25 mpg in the city and 37 mpg on the freeway. The turbocharged engine also keeps the ride exciting by pumping out 181 horsepower.

The larger 2.0L EcoBoost engine gives the Fusion a significant amount of muscle. It has been tuned to pump out 240 horsepower and 270 pound-feet of torque. Drivers will certainly be able to feel the engine’s extra power. Expect the sedan to easily hit 60 mph in less than seven seconds.

The 2016 Ford Fusion has been tweaked to handle more like a European sedan. This means that drivers can look forward to a very poised performance on the road. A beefy stabilizer bar helps the sedan to remain graceful even on curvy roads. The Titanium model further improves handling with its sports-tuned suspension. However, the passengers will still experience a very comfortable ride.

Available with the 2.0L EcoBoost engine, the Intelligent AWD system allows the sedan to keep churning in bad weather. Multiple sensors help the AWD system to instantly detect a lack of grip. Fortunately, the Fusion’s fuel economy does not take a significant dip. The AWD models can still return more than 30 mpg during non-city driving.

Prospective buyers should not disregard the base model. Although the S model is the least expensive trim, it still provides ample equipment. Features such as the rear-view camera make it a great value. Cruise control and an iPod hookup also come standard. Shoppers will have a hard time finding a better sedan for $22,900.

Most automotive critics agree that the new Ford Fusion is an extremely attractive sedan. However, some drivers may desire a touch more sportiness. Luckily, Ford does offer a very stylish Appearance package. A set of 18-inch wheels and a spoiler help to bolster the sedan’s look. A pair of fog lights also give the front-end a more refined appearance.

To delight of future buyers, the 2016 Fusion was able to score a five-star safety rating. The family sedan is also available with an impressive array of active safety features. A Blind Spot Information system enables drivers to safely switch lanes on the highway. Some of the other components include adaptive cruise control and an innovative drowsiness detection system.

Very few people will have any complaints about the Fusion’s roominess. Even tall basketball players will have enough legroom behind the wheel of the Fusion. The sedan’s rather large trunk can also store a fair amount of luggage.

There are several high-tech components available for the new Fusion. While the Active Park Assist feature comes in handy for city dwellers, music fans will appreciate the extra thump produced by the 12-speaker Sony audio system. Some of the other high-end items include ventilated seats, a MyFord Touch infotainment unit, and automatic high beams.

Sadly, the 1.5L EcoBoost engine is no longer available with a manual gearbox. Competitors such as the Mazda 6 and the Honda Accord continue to offer a traditional manual transmission.

Some drivers would appreciate the availability of a V-6 engine. However, prospective buyers will have to settle for the rather potent 2.0L EcoBoost motor.

According to some owners, the MyFord Touch infotainment system has a tendency to react slowly. On the other side of the coin, the new Chrysler 200 has a very responsive UConnect infotainment screen.

How the 2016 Fusion stacks up to the competition:

Today’s family sedan segment is very crowded. The new Fusion competes against the Accord, the Toyota Camry, the Kia Optima, and the Chrysler 200. While the Fusion outshines the Accord and the Camry by offering AWD, the Chrysler 200 suffers from an unrefined transmission.

The 2016 Ford Fusion’s overall safety and smooth driving dynamics make it a solid family sedan. Due to the arrival of a new Appearance package, even the base model has the potential to be a head-turner. Good gas mileage is yet another big plus.
2018 Ford Fusion Buying Guide:

• 2018 Ford Fusion trim levels. What you get with each trim configuration.