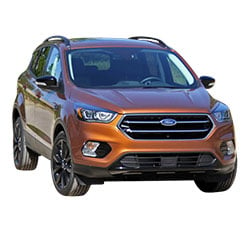 Should You Buy a 2017 Ford Escape? Here Are Some Reasons For and Against

The new 2017 Ford Escape is one of the strongest contenders in the small SUV segment. Drivers have become accustomed to its sporty handling and spirited performance. An exciting number of high-tech features are now offered, including an innovative Sync 3 interface.

Regarding its styling, the 2017 Escape now has an even more refined appearance. A smaller EcoBoost engine takes the crossover’s fuel economy to the next level. Several new technologies have arrived, including adaptive cruise control and Apple CarPlay.

The 2017 Escape is among the most stylish crossovers in its class. An updated front fascia helps give the new model a more refined character. Featuring black exterior trim and a set of 19-inch black wheels, the Sport Appearance package makes the Escape look stunning. Some of the signature paint colors include Canyon Ridge, Ruby Red, and Lightning Blue.

For the 2017 model year, the SUV can now be equipped with a new 1.5L EcoBoost engine. It truly helps give the Escape a great blend of performance and efficiency. It returns an economical 23 mpg in the city and 30 mpg on the highway. However, the top-of-the-line 2.0L EcoBoost engine is nearly just as efficient.

If you yearn for the most performance, step up to the larger 2.0L EcoBoost engine. This year, Ford modified the turbocharged four-cylinder to produce an exciting 245 horsepower and 275 pound-feet of torque. When equipped with this potent engine, the crossover can hit 60 mph in a quick 6.5 seconds. A six-speed transmission comes standard.

While behind the wheel of the 2017 Escape, you will grow fond of its sharp handling. It handles more like a hatchback as opposed to a traditional SUV. A communicative steering system makes the crossover even more enjoyable to drive. When traveling on a rural road, drivers will certainly appreciate its sportiness. You will feel in complete control.

The 2017 Ford Escape comes standard with a front-wheel-drive system. However, opt for the AWD system if you need to overcome snowy road conditions. You can take advantage of the vehicle's nearly eight inches of ground clearance. The AWD system automatically detects poor traction, which gives drivers an extra degree of assurance in bad weather. Fortunately, the AWD system does not cause a major drop in fuel economy.

If you are on a tight budget, the 2017 Escape S should get your attention. With a sticker price of $23,500, it fits the description of a true bargain. Some of the standard equipment includes a rear-view camera, smartphone integration, and Bluetooth technology. Buyers will also benefit from the crossover’s 60,000-mile powertrain warranty.

Ford Escape buyers can now upgrade their ride with a lot of exciting goodies. Featuring Apple CarPlay and Android Auto, Ford’s new Sync 3 infotainment system comes loaded with apps. The foot-activated power tailgate makes loading groceries a breeze. Some of the other upgrades consist of a dynamic Sony sound system, a panoramic Vista Roof, and Navigation.

To free up additional storage space in the front, Ford installed an electronic parking brake. Although the 2017 Ford Escape is not the biggest SUV on the road, its spacious design will surprise many test drivers. A reclining backseat makes it worthy of a road trip. You will also have a competitive 34 cubic feet of cargo space in the back.

All versions of the new Ford Escape feature a powerful braking system. Even the base S model comes equipped with blind spot mirrors. Parents can use the standard MyKey system to prevent their teenagers from speeding and driving irresponsibly. Some of the other safety innovations include adaptive cruise control, blind spot monitoring and forward collision alert. Also, lane departure intervention helps keep drivers on track.

Whether you need to pick up a flat-screen television or drop the kids off at school, the new Escape is destined to keep you satisfied. It is also a good vehicle for traveling out of town. Furthermore, it is just as efficient as the average family sedan.
Buying Tip: To avoid overpaying on a new car, shop prices online first. Get up front pricing before you walk into a dealership. We recommend the following free services; Car Clearance Deals, NADAguides, CarsDirect & Motortrend.
These free services will offer you the lowest prices and supply you with multiple competing price quotes. You will know the best price before you visit the dealer.

Like so many other modern vehicles, the new Ford Escape does not offer a manual gearbox. While this issue won't concern most car shoppers, some drivers view a manual gearbox as a must-have feature. A stick-shift transmission would make Ford's popular crossover especially appealing.

2. Base Model Is Not Quick

In comparison to the rest of the lineup, the S model is a bit slow. While the model's four-cylinder engine offers good gas mileage, it is a bit lackluster in the performance department.

With a towing capacity of only 2,000 pounds, the 2017 Ford Escape is far less capable than the typical pickup truck. Although the larger 2.0L EcoBoost engine increases the crossover's towing capacity to 3,000 pounds, some drivers will need the pulling power of a truck-based SUV.

When stacked against today's other small crossovers, the 2017 Ford Escape deserves to be mentioned among the best. It does not suffer from any major weaknesses. There are a large number of drivers who will like the Escape's sporty performance and attractive styling. With the arrival of new safety technologies, the 2017 model becomes an even better all-around vehicle.