2017 Ford Expedition Pros vs Cons. Should You Buy? 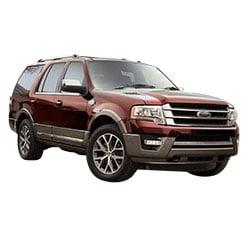 Should You Buy a 2017 Ford Expedition? Here Are Some Reasons For and Against

The Ford Expedition is a full-size SUV that offers a high level of passenger comfort. A heavy-duty frame also enables it to match the towing capabilities of a pickup truck. While the base XLT model will suit the needs of most drivers, the King Ranch Edition is especially luxurious. A top safety rating makes the Expedition an even more attractive option.

Apple CarPlay and Android Auto smartphone technologies now come with Ford's Sync 3 infotainment system. For the 2017 model year, Ford did not make any other significant changes to the Expedition.

Over the last few years, Ford’s 3.5L EcoBoost engine has gained a reputation for its brawny performance. The turbocharged six-cylinder engine pushes out a potent 365 horsepower and 420 pound-feet of torque. It is actually stronger and more efficient than a traditional V-8 engine. With a 0-60 time of 6.4 seconds, the big SUV proves to be very quick.

2) Reasonable Gas Mileage for Its Size

Although the 2017 Expedition is far from being the most environmentally friendly vehicle on the market, it does return decent fuel economy. You can expect to get an admirable 22 mpg on the highway. This SUV is definitely a good option for taking a long road trip. By comparison, the Toyota Land Cruiser tops out at only 18 mpg.

The 2017 Expedition rivals the towing capabilities of a full-size pickup truck. This is a big advantage for the drivers who need to pull a hefty load on a regular basis. Its maximum towing capacity stands at an impressive 9,200 pounds. While trailer sway control comes standard, you can also opt for a heavy-duty tow package.

A RWD system comes standard on the Ford Expedition. However,some drivers will likely need the available Control Trac 4WD system. When traveling in deep snow or sticky mud, you can take advantage of the 4WD system’s low-range gearing. Although a rugged off-road package is not offered, the 4X4 model can handle a typical dirt trail.

When traveling in the 2017 Expedition, everyone will enjoy its comfortable ride. While even the standard suspension performs very well, the optional adaptive suspension takes the SUV’s ride quality to the next level. Drivers can also look forward to experiencing the Expedition’s secure handling. A responsive steering system enables you to easily maneuver the large SUV on the open road.

The Ford Expedition looks noticeably tougher than a crossover SUV. A muscular hood and bold grille give it a very truck-like appearance. Stylish LED fog lights now come standard. Featuring a set of 22-inch polished wheels, the Platinum model definitely has a striking appearance. Some of the most eye-catching exterior colors include Race Red, White Platinum, and Bronze Fire.

Some three-row SUVs suffer from having a cramped third-row seat. Fortunately, that is not the case with the Ford Expedition. All of your friends and family members will have plenty of room. An available power-folding rear seat can easily expand the available cargo space. From suitcases to skiing gear, plenty of extra stuff can be stored in the back.

The 2017 Ford Expedition can be equipped with an impressive list of components. A 360-watt amplifier enables the Sony audio system to offer digital sound quality. Featuring an 8.0-inch touch-screen display, the Sync 3 infotainment interface makes it easy for users to obtain their favorite apps. If you do a lot of traveling, the rear-seat entertainment system is a must for kids.

When evaluated by the federal government, the 2017 Ford Expedition was able to obtain a five-star safety rating. Its superior crash protection should appeal to a lot of car shoppers. A rear-view camera and rear parking sensors come standard on every trim. Meanwhile, the optional blind-spot monitor detects oncoming traffic on the highway.

Ford’s MyKey system comes standard on the 2017 Ford Expedition. This useful feature allows parents to have more control over their teen drivers. Not only can the MyKey system limit their top speed, but it can also prevent teens for blasting the sound system.
Buying Tip: To avoid overpaying on a new car, shop prices online first. Get up front pricing before you walk into a dealership. We recommend the following free services; Car Clearance Deals,   Edmunds,   CarsDirect,   NADAguides  &  Motortrend. These free services will offer you the lowest prices and supply you with multiple competing price quotes. You will know the best price before you visit the dealer.

Reasons Not to Buy a 2017 Ford Expedition – The Cons

If you must travel in a busy city, the large stature of the 2017 Expedition could pose a problem. It will be hard to maneuver the SUV in a tight parking area. A smaller crossover may prove to be a better option for some car shoppers.

2) Interior Could Use an Update

Although the 2017 Ford Expedition has a well-designed interior, some of its competitors have a more modern-looking cabin. In terms of overall luxuriousness, the new Lincoln Navigator is a step above the Expedition.