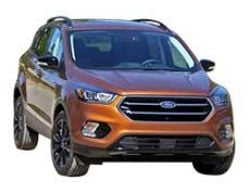 What 2018 Ford Escape Trim Level Should you Buy? What is the Difference Between the Trims?

With the Escape, Ford successfully launched itself into the compact crossover segment. Standing out from its competition thanks to excellent driving dynamics and backed by powerful and efficient turbocharged engines, it is now one of the major players among the small SUV segment. In addition to the strong performance and utility that it offers, critics also praise the advanced technologies that are available on the Escape.

Last year, the Escape saw some improvements in terms of both performance and style, and the 2018 Ford Escape sees only a few small changes. The biggest is the addition of the new SEL trim, which is positioned between the mid-range SE and the high-end Titanium. The four resulting trim levels cover a variety of prices, and each one includes several different key options that could sway buyers one way or another.

This guide goes through what each of the different trim levels adds to the vehicle, as well as telling you about the optional packages available at each level. This should make it easy for you to select the right Ford Escape for you, and get the most out of your brand new car once you do!

Compare the 2018 Escape S vs SE Trims. What is the difference?

The S is the entry-level Ford Escape model, but it should best be thought of as the rental fleet option. Unlike the rest of the model line, it is fairly sparse when it comes to features. Steel wheels, a 4-inch non-touch screen, and a stereo with a CD player make the Escape S feel a little like a throwback to the previous decade.

In a way, it is. It is powered by the engine from the previous generation of the Escape - a 168-horsepower engine that gets less power and fuel economy than the standard engine on the rest of the Escape models. Nor is the S available in an all-wheel drive configuration.

The SE should really be considered the entry point for most Escape buyers. The model comes standard with the new 1.5-liter turbocharged engine that gets 11 more horsepower and roughly 2 more miles per gallon across the board. It is also the first model available with all-wheel drive. Other standard features on the SE are a dual-zone climate control system, fog lights, powered driver’s seat, and and 17-inch alloy wheels.

The SYNC 3 Package replaces the CD-player in the dash with an 8-inch touchscreen with Bluetooth, voice commands, and smartphone integration through Android Auto and Apple CarPlay. An optional navigation upgrade can be added to it, and all SE models can also come with a panoramic moonroof.

Given how bare the base S is, the relatively small price jump from the S to the SE, and the sheer amount of options that the SE opens up, it is clearly the better choice of the two trims in the vast majority of cases. In particular, an SE with the SYNC 3 and Safe and Smart packages combines all of our favorite compact SUV features at a very good price.

When mentioning the Safe and Smart package though, it is important to know that it only features brake support rather than automatic emergency braking like some of Ford’s competitors, so it is not a one-to-one comparison.

Compare the 2018 Ford Escape SE vs SEL Trims. What is the difference?

The SEL is the newest of the Ford Escape trim levels, as it is all new this year. It comes standard with all of the base SE features, plus the contents of the SYNC 3 package. It also replaces the cloth upholstery with leather and adds a power liftgate, halogen headlights, heated side mirrors and rear parking sensors to the spec sheet.

The Safe and Smart package also returns as an option on the SEL, as does the moonroof and the optional built-in navigation system. The SEL also has its own Sport Appearance package, which looks very similar to the SE appearance package but replaces the leather-and-cloth combination with a synthetic leather material instead.

The major attraction of the SEL trim level is that it lets you get leather upholstery and the powered liftgate without upgrading all the way to the pricy Titanium. This addresses much of the criticism levelled at last year’s model for locking those desirable features behind the expensive top trim.

The rest of the package is very similar to the SE, and it is priced relatively similarly. It is about an $800 bump in MSRP between a SYNC3-equipped SE and the SEL, which makes the SEL a pretty good deal if you want the leather seats and the power liftgate. The Safe and Smart package also remains just as useful on this trim level with the same caveats as on the SE.

The Sport Appearance package, however, is a strange choice, as the leatherette interior is seen by most as a downgrade rather than an upgrade. If that is your style, feel free to check it out, but most consumers should probably skip the option completely.

Compare the Escape SEL vs Titanium Trims. What is the difference?

The Titanium version of the Ford Escape offers several features that the SEL doesn’t. It comes with heated front seats, and adds power adjustments for the front passenger seat. It also includes a 10-speaker Sony premium audio system and the built-in navigation system from earlier trim levels is a standard feature. None of those are the main reason you would want to buy the Titanium, however.

That is the 2.0-liter turbocharged engine that powers it. This 245-horsepower powertrain is what turns this athletic crossover into a real speedster. It easily overpowers most of the competitors in the class, and can even keep up with many luxury performance-oriented compact crossovers as well. While this was only an option last year, this year all Titanium models come standard with the upgraded engine, though you can still choose between front-wheel and all-wheel drive.

The Titanium also features the same options as most of the other Escape models. Both the panoramic moonroof and the Safe and Smart package are available at the same price as on the other models. And while there is no Titanium special appearance package, it is possible to trade its standard 18-inch wheels for fancier 19-inch ones.

However, given that performance credentials are one of the reasons why buyers choose the Ford Escape over some of its class rivals, the Titanium should continue to remain a popular model even after many of its comfort amenities were added to the SEL trim.

In many ways, the 2018 Ford Escape is really three vehicles in one. The S is a bare-bones economy crossover, the SE and the SEL are comfortable and tech-savvy compact SUVs, and the Titanium is the crossover equivalent of a hot hatchback, such as Ford’s own Focus ST.

Depending on what kind of compact crossover you are looking for, any one of the three options can be attractive. Of the four trim levels, the only one that is difficult to recommend is the S. It’s combination of last-generation engine and last-decade features really stands out in contrast to how nice the SE is, and there are other, cheaper options available if you are looking for something fairly basic.

The remaining three trim levels are all excellent picks however. If you want to have one of the most powerful small SUVs, choose the Titanium. If you want leather, go with the SEL. Otherwise, take the SE. Whichever of them you end up with, you will appreciate both the features and the value they offer.

Buying Tip: To avoid overpaying on a new car, shop prices online first. Get up front pricing before you walk into a dealership. We recommend the following free services; Car Clearance Deals,   Edmunds,   CarsDirect,   NADAguides  &  Motortrend. These free services will offer you the lowest prices and supply you with multiple competing price quotes. You will know the best price before you visit the dealer.
Save Money on a 2018 Ford Escape:
Are you Shopping for a New Vehicle? Find the Best Deals with "Free - No Hassle" Prices Quotes.