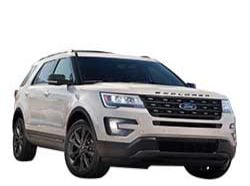 What 2018 Ford Explorer Trim Level Should you Buy? What is the Difference Between the Trims?

The Ford Explorer is an American icon, with customers eagerly following its journey from a mid-size body-on-frame SUV of the early 2000s to the modern high-end full-size crossover. The Explorer is a large, three-row car that can seat up to seven. A choice of strong engines and a good driving feel, combined with its excellent utility, have made it a popular car among car-poolers, performance enthusiasts and police departments alike.

While the current generation of the Explorer dates back to 2011, it has seen several mid-cycle refreshes since then, the most recent of which was in 2016. The current model is unchanged from last year, when Ford replaced its much criticized MyFord Touch system with the new cutting-edge SYNC 3 infotainment and adjusted several of its trim levels.

Unlike many other vehicles, the trim levels of the Ford Explorer are relatively easy to navigate, with a few exceptions. Each model tends to build on the previous in predictable ways and there are not many special packages or mutually-exclusive options. Nonetheless, with five models, three engines and a few packages to juggle, it can easily become a bit of a handful. This article will guide you through the major differences between each model, helping you decide which one has the features and equipment that you want.

Compare the 2018 Explorer base vs XLT Trims. What is the difference?

The most basic Ford Explorer trim level does not even get a name, being referred to as simply Explorer. It does not lack for equipment, however. It comes standard with a cloth interior and a full set of power options, as well as a 4.2-inch infotainment screen that displays the rearview camera image and supports Bluetooth for calls and audio streaming. The second and third rows get tinted windows and the headlights are a bright halogen/LED combination.

Aluminium wheels, front-wheel drive and a naturally-aspirated V-6 are standard, but the latter two can be upgraded. The other engine option is a 2.3-liter EcoBoost four-cylinder turbo, which trades the V-6 10 horsepower in exchange for 55 more pound-feet of torque and between 2 and 3 more miles per gallon. Other than that and the all-wheel drive, the Explorer base has few big ticket options, with a la carte items like a tow package or satellite radio rounding out the feature selection.

Many of the upgrades that the XLT brings over the base model are fairly cosmetic, such as the unique upholstery design or the Signature LED lights. The powertrain options remain the same. It also comes with a number of practical updates, such as power seats for the driver and front passenger and a proximity key with push button start technology. But the real value of the XLT comes from the range of options packages that it can include.

The major ones are the Driver Connect package, which includes an 8-inch touchscreen running the SYNC 3 infotainment system with Android Auto and Apple CarPlay Support in addition to a number of other nice features like a remote starter, dual-zone climate control, LED fog lights, a powered liftgate, and a seven-speaker sound system. The Comfort package is an upgrade on top of that, replacing the cloth upholstery with leather and adding heating for the front seats and the steering wheel.

The base Ford Explorer offers a pretty compelling deal for someone who is just looking for a large and reliable seven-seat vehicle with no need for extra bells and whistles. Those buyers are rare however, with most expecting a range of features that is more in line with what the XLT offers, especially with the Connect and Smart and Safe packages, with the heated leather from the Comfort package also being a tempting buy. For the modest price increase that the XLT demands, that will generally mean a better deal going with that over the base for most.

Compare the 2018 Ford Explorer XLT vs Limited Trims. What is the difference?

For almost everyone, the XLT and its many optional packages cover pretty much all of the must-have features for a car like the Explorer. The Limited, as a result, gets to work on all of the nice-to-haves instead. It comes standard with the four-cylinder EcoBoost, though the V-6 remains an available option. It also includes all of the comfort and connectivity options from the XLT, though the leather is perforated on the Limited and the front seats are cooled as well as heated.

A voice-controlled navigation and a 180-degree front view camera are also standard, as is a 12-speaker Sony sound system. The Smart and Safe package, which is the same as on the XLT, can either be added separately or included in an optional bundle with enhanced parking assist and contoured Active Motion seats. Second-row bucket seats are a separate available option.

The Limited is only a few thousand more expensive than a similar XLT, but it covers a nice selection of nice equipment. While the navigation system is probably redundant given the presence of Apple CarPlay and Android Auto, the seats are significantly nicer and the Sony speakers sound wonderful. Of course, these are in general nice extras rather than key features, but if you are looking to make your Explorer feel a bit nicer and more upscale, the Limited offers a good amount of premium content for the money

Compare the Explorer Limited vs Sport Trims. What is the difference?

Like the Limited, the Explorer Sport builds on the feature set of the XLT, but instead of demonstrating comfort and convenience technology, it demonstrates Ford’s performance chops. It is only available with one powertrain choice: all-wheel drive linked to the twin turbocharged 3.5-liter EcoBoost V-6. At 365 horsepower it is very quick, and the Sport model has the agility to go with it thanks to larger wheels and a stiffer suspension.

This is accompanied by the usual batch of sporty visual signaling, from blacked out headlights and taillights to chrome-tipped quad exhaust. The Sport does come with its share of personal comforts as well. It has the same perforated leather as the Limited, but with its own sporty design and color scheme. Like the Limited, it can also be fitted with the Smart and Safe technology, which can also be bundled with front-seat ventilation and the front-view camera. A moonroof, rear seat entertainment and second-row bucket seats are all stand-alone options.

This is the Explorer to go with if the other two engine options were not powerful enough for you. The Limited and the Sport have very similar features and package selection, so the crux of the choice really hinges on the more powerful engine. It is only available in this trim and the more expensive Platinum, so if you want the extra power, there is not really a more cost-effective option. However, most buyers are not going to need the extra power that the twin-turbo V-6 packs. If you are one of those, then the Limited will be a much better option.

Compare the Explorer Sport vs Platinum Trims. What is the difference?

The top of the Explorer food chain, the Platinum sets itself apart visually with a few unique exterior styling elements and a truly decadent interior. Seating surfaces are covered by the aptly-named Nirvana leather and the cabin is adorned with leather and polished wood accents.

Features-wise, the Platinum combines the performance elements of the Sport with the luxury elements of the Limited. Pretty much all of the available options from anywhere on the Explorer spec sheet are standard on this model, with the lone exception of the rear seat entertainment system, which can be added as an option.

Once all of the options and packages are accounted for, the price increase from the Sport to the Platinum is a relatively modest one, so the nicer cabin and the more comfortable seats are pretty easy to justify. If you are already planning on going with a fully-accessorized Sport and like the look of the Platinum, you won’t regret the upgrade. However, the biggest downside of the Platinum is that it requires the EcoBoost V-6. Anyone who is not interested in the improved performance that it offers will find moving from the Limited all the way to the Platinum a very steep ask.

Aside from the base trim level, Ford has done a great job of making each of the different models of the Explorer exciting. The XLT is among the better values thanks to its excellent customizability. It can cover everything from a value SUV with good connectivity and safety options to a full leather-trimmed cruiser.

The Limited brings a high degree of polish and style to the model, while the Sport is fast and the Platinum is downright luxurious. Depending on the features you are after and the price point you want, all four of these models can be a great buy.

Save Money on a 2018 Ford Explorer:
Are you Shopping for a New Vehicle? Find the Best Deals with "Free - No Hassle" Prices Quotes.