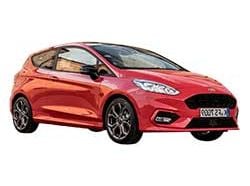 What 2018 Ford Fiesta Trim Level Should you Buy? What is the Difference Between the Trims?

When subcompact cars really began taking off in the last decade, Ford was perfectly situated to get in on this emerging market. Its Ford Fiesta was already a beloved subcompact in Europe, and it had everything drivers wanted: Dashing Kinetic Design looks, a selection of strong and economical engines, and some of the newest infotainment and connectivity technologies.

More importantly, the existing design and production pipeline enabled Ford to keep the price of the Fiesta low while still meeting the growing demand for subcompacts. Since the current generation of the Fiesta was first released in 2011, many competitors have caught up and the Fiesta is not as dominant on the subcompact market as it once was, but it still remains a popular choice with new drivers on a budget, young professionals looking for a vehicle suitable for urban living, and performance enthusiasts looking for the combination of light weight and engine power that the high-performance Fiesta ST brings.

While the current 2018 Ford Fiesta may seem a little dated, as it was last refreshed in 2014, Ford has done a good job of keeping up with the times in terms of standard and optional features. Many of the equipment changes mirror the next-generation Fiesta that is already out in Europe and should be arriving in the United States for the 2020 model year. Even on the current-generation Fiesta though, the entry-level models and the high-end ones alike are well-equipped in comparison to the competition.

In this guide, we will compare the different models of the Fiesta to help our readers find the perfect combination of equipment and price.

Compare the 2018 Fiesta S vs SE Trims. What is the difference?

The base model of the Ford Fiesta - the S - is, like most subcompacts, relatively bare in terms of equipment, but it is also not one that drivers are likely to come across often at dealerships. It comes in both hatchback and sedan varieties like almost all of the other Fiesta trims, and comes with a fairly basic set of standard features: a manual transmission, 15-inch steel wheel, and cloth upholstery.

It does have air conditioning and power locks, though it lacks keyless entry, power windows, and cruise control. On the upside however, a rearview camera is standard, as is a basic SYNC infotainment system with six speakers. Bluetooth and auxiliary inputs are supported, but the 4.2-inch display is not a touchscreen and there is no smartphone app support. An automatic transmission and a keyless entry keypad are the only major options for this model.

The SE sedan is the real mass-market entry level model of the Fiesta, and is the one Ford actually expects to be purchased by real people as opposed to rental agencies or corporate fleets. It fixes most of the glaring omissions from the S model: the wheels are aluminium alloy, and there is cruise control, power windows, and keyless entry. There is also added interior ambient lighting, and the neat MyKey function, which allows setting limits on certain drivers, such as when loaning the car to a friend or a teenage child.

The options selection for the SE is also quite a bit richer than on the S. An automatic transmission is also an upgrade on this model, as is the keyless entry keypad, but there are also some more nice packages available.

The biggest is the 201A Equipment Group, also called the SE Appearance Package. It adds 16-inch wheels, body color bumpers, fog lights, a spoiler for the sedan models, and a special sporty cloth trim. Aside from the appearance upgrades, the Appearance Package also upgrades the infotainment system to a SYNC 3 system with a 6.5-inch touchscreen. It supports satellite radio as well as Apple CarPlay and Android Auto, and comes with two USB ports.

Other available upgrades are the Cold Weather Package, which adds heating to the front seats and side mirrors, and also adds an automatic digital climate control system. A sunroof is also available, as well as a navigation system for the models with SYNC 3 infotainment. The hatchback model gets all the same equipment as the sedan with the exception of the spoiler, which is already a part of the hatchback body kit.

Given the starting price point of the SE model, it is likely to be the better choice for almost anyone who is looking to buy a brand-new subcompact car than the S. For only roughly $1,000 more, it offers simply too many convenience features to pass up. The available advanced infotainment and the heated seating is also likely to lean most people towards the SE model compared to the S.

Even the thrifty buyers who are okay with a lack of cruise control and power windows may have difficulties finding an S Fiesta, as dealers do not stock many of them, making it necessary to upgrade to the SE anyway.

Compare the 2018 Ford Fiesta SE vs Titanium Trims. What is the difference?

The Titanium is the premium Ford Fiesta trip, and only its size gives away the fact that it is a subcompact once you are inside. It is fairly richly appointed with heated leather seats, the 6.5-inch SYNC 3 infotainment, and an 8-speaker Sony sound system. Automatic transmission and heated side mirrors are also standard.

As the Titanium covers most of the Fiesta features, it only comes with a few options. A power moonroof and the navigation system are the only upgrades available, and the Titanium incorporates all other optional features from the lower trim models as part of its standard equipment.

Starting at just a shade over $20,000 for the sedan model after the destination fee, the Ford Fiesta Titanium has a very nice equipment set for its price point. And it comes for only a modest price increase over the SE - about $1,200 after adding the optional features the Titanium includes. That makes it a fairly worthwhile upgrade for the leather seating and the premium Sony audio. The SE is a better choice for buyers who do not care for those upgrades, but otherwise the Titanium remains a very good value.

Compare the Fiesta Titanium vs ST Trims. What is the difference?

The high-performance Fiesta ST hot hatchback is quite a different drive from the regular Fiesta. Available exclusively in the hatchback, it uses a 1.6-liter turbocharged engine to raise the power output from 120 to 197 horsepower. While that may not seem much for a performance car, the Fiesta is a very light subcompact, and that amount of power simply sends it flying at the push of the pedal. It also comes with 17-inch wheels and a manual transmission only. Besides that, it is missing a few of the comfort features added by the Titanium. Cloth seats are the standard, and they are not heated. Neither are the side mirrors. However, the SYNC 3 infotainment system is included and so is the Sony sound system.

In terms of options, the Fiesta ST offers mostly the same choices as the Titanium. The moonroof and the navigation system are both available as standalone upgrades. The only upgrade unique to the ST is the Recaro Seat Package, which comes with Recaro sport seats partially upholstered in leather. It also adds heating to the front row seats and the side mirrors, mostly putting the ST on the same level as the Titanium.

For feature-focused buyers, the ST is a bad choice, as it offers less equipment than the Titanium, costs about $2,000 more, and gets worse gas mileage. But for performance enthusiasts, it is a performance subcompact unlike any other. With no other similar choice available in the subcompact class, it is the perfect choice for small-car enthusiasts who want an agile and powerful car. For drivers who just want an inexpensive but comfortable mini to drive around town, the Titanium will offer a much better deal.

Almost all of the 2018 Ford Fiesta trim choices offer drivers a solid value and are worthwhile to consider depending on one’s specific needs. The S offers a relatively nice set of technology features for a very low price, though it has limited availability and is missing some key basics.

The SE offers a decent balance between standard equipment and options, and costs only slightly more than the S. The Titanium includes almost all available Fiesta features, and is well worth the price of admission for those drivers who want a nicely equipped car without paying too much. And for performance enthusiasts in this segment and price range, there is simply no better choice than the Fiesta ST.

Of these, we would advise most buyers to start with the SE trim level, as it has the greatest option selection and is also the most common trim level available. If more equipment feels necessary, an upgrade to the Titanium may be in order, but the SE on its own should satisfy a large portion of Fiesta buyers.

Buying Tip: To avoid overpaying on a new car, shop prices online first. Get up front pricing before you walk into a dealership. We recommend the following free services; Car Clearance Deals,   Edmunds,   CarsDirect,   NADAguides  &  Motortrend. These free services will offer you the lowest prices and supply you with multiple competing price quotes. You will know the best price before you visit the dealer.
Save Money on a 2018 Ford Fiesta:
Are you Shopping for a New Vehicle? Find the Best Deals with "Free - No Hassle" Prices Quotes.