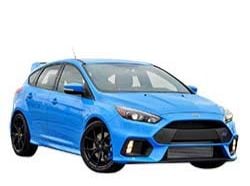 What 2018 Ford Focus Trim Level Should you Buy? What is the Difference Between the Trims?

For a manufacturer that tends to concentrate its development on trucks and SUVs, Ford has gotten a lot of mileage out of its little Focus compact over the last two decades. The small car has proven very effective in many different roles, from an entry-level budget sedan to a near-luxury cruiser, a performance car, and an electric vehicle.

This versatility has made it quite popular both in the United States and in the rest of the world, where it is almost as iconic as the brand’s F-150 pickup. And while Ford has not made many upgrades to the Focus in the last few years, the 2018 model remains a robust and modern entry on the compact market thanks to the newly added SYNC 3 infotainment system, though a more thorough update is likely on the horizon for it.

With a wide range of roles to fill, the Ford Focus comes in several varieties and trim levels. It is available both with a sedan body style or as a hatchback, and there are as many as five different engines to choose from. These options can then be matched up with one of seven equipment trim levels, though not all options are available for each one. While this may seem confusing, Ford has made selecting the right Focus relatively easy to making each trim level fairly distinctive.

This guide shows the key differences that distinguish each one, along with some advice as to how to get the most out of your 2018 Ford Focus purchase.

Compare the 2018 Focus S vs SE Trims. What is the difference?

The Focus S is the inexpensive basic trim level, with much of its popularity coming not from the features that it offers but its price, as it is slightly cheaper than most other entry-level compacts. It is available in a sedan version only, and is paired with the standard 2.0-liter engine that powers most of the Focus lineup. A five-speed manual transmission is standard, while a six-speed automatic is an optional upgrade.

Aside from those, the Focus S gets all the basics: power locks and windows, air conditioning, 15-inch steel wheels, a rearview camera, and Bluetooth. A few extra nice amenities are steering-wheel audio controls, two USB ports, and a rearview camera. All of these are standard, and aside from the automatic transmission, the S has no other options.

The SE is a relatively small, incremental upgrade over the base S, but it opens up a number of different directions that the Focus can be taken in.

This is the first trim level that is available in both sedan and hatchback form, and it is also the first one with multiple engine options. The SE sedan comes with either a standard engine and a choice of either manual or automatic transmission, or a more efficient 1.0-liter three-cylinder with an automatic transmission. The SE hatchback comes exclusively with the 2.0-liter engine and the six-speed automatic.

Aside from those differences, both models get two additional speakers, satellite radio, cruise control and 16-inch alloy wheels. Both can also be equipped with a Cold Weather Package that adds heated front seats, steering wheel, and side mirrors, though on the sedan it is only available with an automatic transmission. Automatic SE sedans can also be equipped with a special appearance package that includes a few styling elements as well as rear disk brakes and fog lights.

Either the S or the SE can make a good choice for buyers looking for an entry-level sedan. While the Focus S is a more simple, “works out of the box” solution, the SE offers a number of options that should be carefully considered, but ultimately make for a more flexible vehicle.

Buyers would do well to try out both of the engines and body types, as they can feel very different in terms of interior and driving feel. In terms of power, the three-cylinder feels similar to many other manufacturers’ engines, while the four-cylinder feels a little more potent, though its fuel economy is a little below the average.

If after all of that you find that you prefer a base sedan, then the S is probably your best choice, with the SE the better option if you prefer either the more efficient engine, the hatchback design, or want one of the optional packages.

Compare the 2018 Ford Focus SE vs SEL Trim Levels. What is the difference?

The SEL trim level marks a midpoint in the Focus lineup, acting as a bridge between the mass-market models and the more high-end ones. It gets 17-inch premium wheels, a moonroof, reversing sensors, dual-zone climate control, and the more advanced SYNC 3 infotainment. The system comes with an 8-inch touchscreen, Android Auto, Apple CarPlay, HD and satellite radio, and a 10-speaker Sony sound system. It can also be further upgraded with a navigation system, and the Cold Weather Package from the SE returns as an option. The 2.0-liter engine and the six-speed automatic are the sole options for the powertrain on the SEL, and it is available as both a hatchback and a sedan.

While the SEL comes with a number of nice options, the main draw is the advanced infotainment system. If you spend a lot of time using your phone’s apps, then the additional functionality that the smartphone app integration on the SYNC 3 provides will be indispensable.

Despite being the mid-range model, it is still quite modestly priced for the segment, so upgrading to it can be a very good decision, unless of course none of those features are of interest to you.

Compare the Focus SEL vs Titanium Trims. What is the difference?

The Titanium is the peak of the conventional Focus lineup, and comes with a number of attractive extras. It is upholstered in leather and includes the full Cold Weather Package from the SE and SEL trim levels. It is also equipped with a smart key, push button start and a power driver’s seat. It can be equipped with an optional navigation system and parallel parking assist.

Also an option is the Titanium Technology Package, which adds automatic high beams, blind spot monitors with rear cross traffic alerts, and lane keep assist. Just like the SEL, it comes in both sedan and hatchback varieties, both of which are equipped with the standard 2.0-liter engine and an automatic transmission.

The main reasons to choose the Titanium over the SEL or the SE are the safety features and the upgraded interior. The leather upholstery is nice, and the price of the model is on par with the Focus’s competitors, making it a worthy investment if you prefer leather seating.

The Technology Package likewise contains some nice addons that can be difficult to give up if your current car has them, such as blind spot monitors. It is important to note that it does not include features like forward collision warning or automated emergency braking that similar packages on other vehicles include.

Compare the 2018 Ford Focus Titanium vs Electric Trims. What is the difference?

While the Ford Focus Electric may be the most expensive sedan model of the Focus available, it still falls on the lower end of the electric car price range, while delivering comparable features to the SEL and Titanium trim levels. The base Electric model comes with the same features as the Titanium, with a few exceptions. It is fitted out in eco-conscious cloth upholstery instead of leather, and lacks a moonroof or a power driver’s seat.

On the other hand, it includes the navigation system as standard. While neither the moonroof nor the power seat are available, it is possible to upgrade the Focus Electric with leather upholstery. Other than that option, however, there is no other additional equipment, and the electric Focus is only available as a sedan with an automatic transmission.

Buyers who are looking for an inexpensive all-electric vehicle could do a lot worse than the Ford Focus Electric. Its starting price is just shy of the $30,000 mark, but between manufacturer and government incentives, it is not unrealistic to find yourself paying roughly the same or even less for one than you would for a Titanium Focus. It does come with slightly less equipment and does not have the same available safety package, but it also consumes absolutely no gas. If that last part sounds exciting, we recommend you give this model a try.

Compare the 2018 Focus Titanium vs ST Trim Levels. What is the difference?

The Ford Focus ST is one of the two performance trims for the Focus, and is available only in a hatchback with a six-speed manual transmission. It comes with a 252-horsepower turbocharged 2.0-liter engine, 18-inch wheels, and a sport suspension system.

Other features on the model are roughly comparable to the SE model, though it can be upgraded through one of two optional packages. The first adds the SYNC 3 infotainment and Sony sound system, together with a moonroof and partially leather Recaro seats, while the second gives you full-leather Recaros, powered driver’s seat, front heated seats, and a navigation system. The two are mutually exclusive however, so choose wisely.

The Focus ST is a very fun car to drive, with some impressive power for its small weight, though it won’t be on the radar for most shoppers. For performance enthusiasts though, it offers a very good balance between power and price, though the trade-offs between the different available upgrades can make choosing the right one a little frustrating at times. At only a slight premium over the Titanium, it can be a good choice if you want a hatchback with some kick to it.

Compare the Focus ST vs RS Trims. What is the difference?

The Focus RS is the most powerful Focus available, at 350 horsepower. It is also the most expensive one, with a starting price of over $40,000 - more than double that of the entry-level models.

Aimed exclusively at the high end of the performance community, it is very similar to the rally cars used by the Ford racing team, albeit topped off with some comfort features. Like the ST, it has its own unique appearance style, and comes loaded up with Recaro leather seats, a Sony sound system, and the rest of the Titanium standard features aside from the moonroof, which is an optional addon. As with the ST, the RS is only available as a manual-transmission hatchback. It is also the only Focus with an all-wheel drive system, which is also standard.

While the RS does offer a nice set of comfort features, the real draw for it is its incredible power. In general, most drivers will find it to be very excessive for day-to-day driving, a feeling made worse by its tight suspension system, it is a great vehicle for autocross or rally racing. As a compact commuting hatchback however, it is overpowered and overpriced.

All of the different trim levels offered by the Focus put its versatility on full display. Most people considering the Focus are probably attracted by its low entry price and a relatively good selection of features. For those buyers, the S and the SEL models can hold the most value, though those who want to maximize their gas mileage should also consider the SE with its more efficient engine.

If either leather upholstery or active safety equipment are must-haves, then the Titanium is the trim to choose, and it comes with a number of other good features that make it a worthwhile investment. The Electric, ST and RS models are more specialized, but all three make for a good selection in their chosen areas as well.