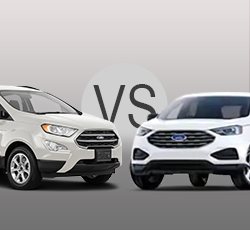 2020 EcoSport vs Escape - How do they stack up? What are the differences?

In 2020, Ford is attempting to be all about value. Without any sedans left to choose from in the United States, customers are having to look to crossovers for their Ford fix. The choices for an economical crossover here center on the 2020 Ford Ecosport and the 2020 Ford Escape, which was just redesigned for entry into its fourth generation.

The Ecosport might look small, but it has an above-average sized cargo area. While front-wheel drive (which we will refer to as FWD from here on out) is standard, you can get all-wheel drive (or AWD for short) as an option on every trim level. Other standard features include smartphone app integration via Apple CarPlay and Android Auto and the rest of the easy-to-use Sync 3 infotainment system. On the downside, the Ecosport only has blind spot monitoring as far as advanced driver aids go, and the fuel economy is not that economic at all. The base engine is underpowered and struggles to perform well when the vehicle is loaded with people and cargo. And, no matter the road surface, the ride quality feels shaky and uncomfortable.

On the other hand, the revamped Escape feels current and stylish. The powertrain options have a broad range, going from the conservative hybrid to something much sportier. The second row of seats slides fore and aft, making it easy to enhance cargo utility and create more room for passengers. The one design element that gets problematic is the sloping roofline as it takes away from the vehicle's utility.

So, which vehicle might be the one for you? Is one of these Fords better than the other? We will go through both vehicles in this comparison review, comparing and contrasting their powertrains, drivability factors, and safety features and ratings. In the end, we will let you know which vehicle we think has the most value and makes for the overall better buy, so be sure to read right through to the end.

Let us kick things off by talking about the powertrains that these two vehicles have equipped. The 2020 Ford Ecosport has a standard 1.0-L turbocharged 3-cylinder engine, which is equipped on the S, SE, and Titanium trim levels. This powertrain generates 123 hp and 125 lb-ft of torque. FWD is standard but AWD is optional on all of these trim levels. The SES comes with standard AWD, and it gets upgraded to a 2.0-L 4-cylinder engine that puts forth 166 hp and 149 lb-ft of torque. Both of the powertrain options come with a 6-speed automatic transmission.

There are some pros and cons to driving each of these Fords. But drivability is not just based on how the powertrains perform. It also includes how comfortable the cabins are, how the rides feel, how well designed their cabins are, how functional their tech features are, and how much utility they possess.

The 2020 Ford Ecosport has a vastly underpowered 3-cylinder engine that really drags down its overall drivability. Its 0-60 time is a whopping 11.4 seconds, making it one of the slowest vehicles in its segment. It is terrible at merging and passing n the highway, especially since the 6-speed transmission seems like it cannot make up its mind which gear it wants to be in. The tires are definitely economy-oriented, so you will not feel much grip on the road. The steering also feels awful since it is so incredibly weak, almost as though the wheels and the steering system are not even connected. Not to mention that the brakes require a firm foot when you need to make a panic stop.

Meanwhile, the 2020 Ford Escape has a plug-in available for the SE, SEL, and Titanium trim levels that provides some actual fuel economy. Handling feels agile and more like a sedan than an SUV. The steering feels precise, and even the eCVT sounds delightful when you put it to work. Braking feels far more secure than the Ecosport's.

Comfort-wise, the Ecosport has front seat bolsters that, while they are not wide, keep you securely in place as you round through turns. The seat bottoms are quite comfy, but the seat backs are totally flat and not supportive, both in the front and in the rear. Ride comfort is dismal as it feels really bumpy even on normal road surfaces. The harder the impact, the harder the bump. On a positive note, automatic climate control works well, and seats heat up quickly. Also, there is very minimal engine noise and almost no wind and road noise.

The Escape has a lot of soft touch surfaces on the front door panels and dashboard. There are not that many hard plastic surfaces to be found, so things look their price here. There is also plenty of ride comfort with the Escape's quiet cabin. It has a very European-like appeal in terms of style and comfort.

The interior of the Ecosport feels roomy enough, but the dash take sup a ton of space. The front and rear pillars are thick, which means that they create huge blind spots and limit rear visibility. While some of the controls work well, the layout is odd since they are cryptically labeled. Also, the digital buttons on the touchscreen are hard to tap with your finger. The driver will have an easy time getting in and out of the vehicle, but the sloping roofline and stadium style rear seats make it harder for rear occupants to get in and out.

The Escape gets more things right. Visibility out of it is excellent, as is the ride height. The plastic wood grain looks kind of tacky, but the aluminum inserts on the lower trim levels look quite chic. The fan speeds are not the fastest on the single zone automatic climate control.

Speaking of technology, the Ecosport comes with Sync 3 on the higher trim levels. This system is easy to use and works quickly. Smartphone app integration via Apple CarPlay and Android Auto is standard with the Sync 3. The high-definition screen has a navigation display that shows crystal clear graphics, and the optional Bang & Olufsen sound system sounds superb. There are not a lot of standard advanced driver aids, and the voice commands come off as being very rigid. However, standard WiFi hot spot on an economy vehicle like this is almost unheard of. The Escape also has a lot of standard technology, including the Sync 3 and a high-tech LCD display. The dial transmission is something that drivers enjoy having available, and the controls are laid out in a smart, intuitive fashion. Smartphone app integration is standard, as is WiFi hot spot.

The Ecosport does have a good amount of utility with its 20.9 cubic feet of cargo space, which can be maxed out to 50 cubes. However, you have to rearrange the front seats and rear head rests in order to max out the vehicle's utility. The left-hinged tailgate opens up for easy curbside loading, but installing child car safety seats is difficult because the LATCH anchors are buried behind stiff upholstery. There is enough in-cabin storage space with the deep center console. The Escape can also easily fit in luggage and other cargo. Its 34.4 cubic feet of cargo space (or 37.5 cubes depending on the trim) can be maxed out to 60.8 cubes (or 65.4 cubes).

Safety is, of course, a huge issue that can influence whether or not you buy a vehicle. As far as features go, Ford tries to load its vehicles up well, but the Ecosport is noticeably lacking a lot of advanced driver aids. It basically just has a blind spot monitoring system and rear collision warning on the Titanium and a standard rear view camera.

As far as ratings go, the National Highway Traffic Safety Administration (also known as NHTSA) gave the Ecosport 4 out of 5 stars overall. It got 4 stars on the overall front impact, front driver side, front passenger side, and the rollover test. The Insurance Institute for Highway Safety (which is best known by the acronym IIHS) has not rated the 2020 Ford Ecosport yet.

NHTSA gave the Escape 5 stars overall with only a star lost on the rollover test. One recall has been issued to this date, which involves the seat back's strength being diminished. IIHS gave the Escape the title of 2020 Top Safety Pick with "Good" ("G") scores on everything but the headlights. The LATCH system, most notably, got a "Good-plus" score for its incredibly easy use.

When it comes to value, the Ecosport might have the more appealing price tag, but you don't even get what you pay for with this economy vehicle. It is actually expensive for a subcompact crossover, and the Escape and other crossovers give you more for the money. Some test drivers have noted a strange rattle in the cabins of the Ecosports they tried, suggesting that there might be some build quality issues. The EPA estimate of 28 mpg combined is not accurate, as it really is more like 25-26 mpg combined. This number is closer to the optional AWD's numbers. The vehicle's sluggishness is really disappointing and drags these numbers down.

The Escape is best if you stick to the 4-cylinder engine for a nice amount of power that gets smoothly delivered. The hybrid powertrain really is economical, getting you up to 41 mpg combined (with 44 mpg in the city and 37 mpg on the highway). This alone makes the Escape a much better choice, especially if you go the hybrid route.

Overall, there is no competition between these two vehicles. The 2020 Ecosport just pales in comparison to the Escape. The Escape has a decent enough price tag for all the things that it offers. It looks and feels more upscale than the Ecosport and is actually more economical when you get the hybrid. It will save you money at the gas pump and provides plenty of comfort and security.

Save Money on a 2020 Ford EcoSport:
Are you Shopping for a New Vehicle? Find the Best Deals with "Free - No Hassle" Prices Quotes.