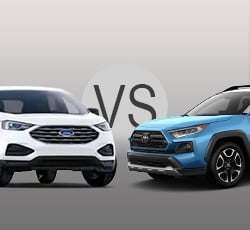 Compact crossover SUVs have been dominating the market for a wide variety of drivers. Two of the most popular options out there are the Ford Escape and the Toyota RAV4. The RAV4 received a complete redesign in 2019 while the Escape is all-new for 2020. As a result, both of these vehicles are loaded with cutting-edge features.

Like with any vehicle, both the Escape and the RAV4 also have their drawbacks. The redesign for the Escapes reduces its practicality and cargo space, for example. At the same time, the RAV4 is powered by an engine that leaves a lot to be desired by some drivers.

The key to successful car-buying depends on the ability to balance the pros and cons of your potential choices and decide which one comes out ahead. Helping with this issue is the exact reason that this guide was created.

For the Escape, buyers will be looking at a few different engine choices. Standard for the entry-level S trim is a turbocharged 1.5L three-cylinder engine that can make 181-horsepower and 190 lb-ft of torque. This engine works with an eight-speed automatic transmission and provides ample acceleration and power for a vehicle of this size.

The SE Sport and Titanium trim combine fuel-efficiency with an athletic performance that will definitely appeal to some drivers. They use a hybrid engine that is based on a 2.5L four-cylinder. The end result is a version of the Escape that produces 200-horsepower. Ford pairs this engine with a continuously variable transmission for smooth shifts.

Going with either the SEL or Titanium trim level will give buyers the option of going with a turbocharged 2.0L four-cylinder generating 250-horsepower and 280 lb-ft of torque as well. This engine comes standard with all-wheel drive, which was optional on lower trim levels. An eight-speed automatic transmission is once again used for this engine.

The 2020 RAV4 offers far fewer options. All models come standard with a 2.5L four-cylinder engine with the ability to make 203-horsepower and 184 lb-ft of torque. An eight-speed automatic transmission and front-wheel drive are considered standard.

For the TRD Off-Road and Adventure trim levels, an advanced all-wheel-drive system comes standard. It includes a torque-vectoring feature that was specifically designed to help in situations with low-traction. Consumers can get AWD on other trim levels, but it is a more standard setup.

Towing numbers are identical between these two strong SUV options. Either one can bring along up to 3,500 pounds when properly equipped. For the RAV4, this means going with the Adventure trim with the Tow Prep Package. The Escape Titanium can tow up to the 3,500 pounds when it is equipped with the Class II Trailer Tow Package.

It is also worth noting that both vehicles have hybrid variations to consider. The Escape PHEV is a plug-in hybrid. It has an estimated all-electric range of 37 miles. As for the RAV4 Hybrid, drivers can expect 41mpg in the city and 38mpg on the highway. A plug-in variation of the RAV4 is not available for 2020 but is expected to hit the market sometime in 2021.

When comparing non-hybrid models, the 2020 Escape and 2020 RAV4 offer similar numbers as far as fuel economy goes. The standard turbo 1.5L engine for the Escape will give drivers 27mpg city and 33mpg highway. These are great numbers for the class. The turbocharged 2.0L four-cylinder that comes exclusively with AWD is estimated to get 23mpg city and 31mpg highway.

Moving onto the RAV4, the one engine option is going to give drivers 28mpg in the city and 35mpg on the highway. These numbers beat out the impressive standard engine for the Escape, but at a price. Many find the acceleration for the RAV4 to be lackluster and would be happy to give up a few miles per gallon for some extra power. Going with all-wheel-drive will drop each of those numbers down by one.

Warranties are identical between the Ford Escape and the Toyota RAV4. Buyers will get 3 years or 36,000 miles for their limited warranty and five years or 60,000 miles for the powertrain. Those interested in the predicted reliability scores from J.D. Powers should know that the Escape got an astounding 4.5 stars out of five. The RAV4 received three stars, which is considered just above average.

The Escape is fun to drive. It does a great job absorbing most bumps in the road and does not let in too much noise. Drivers will love the sharp steering and lack of body roll when behind the wheel of the Escape. The RAV4 is not quite as fun, but still does a good job of providing a smooth and composed ride. While a bit more road and wind noise does leak into the RAV4's cabin, it is not enough to deter most buyers.

At the same time, the RAV4 has a significant amount of extra cargo space in comparison to the Escape. For the RAV4, there are 37.6 cubic feet behind the second-row and 69.8 cubic feet when that backseat is folded down. The Escape does decent, offering buyers 33.5 cubic feet with the seats up or 65.4 cubic feet with them down.

When it comes to the infotainment system, the entry-level RAV4 is more generous than the Escape. A 4.2-inch display with the basic SYNC system comes standard in the Escape S. Going with the SE trim or higher means upgrading to the SYNC 3 system, which includes an 8-inch touchscreen and smartphone integration with Android Auto and Apple CarPlay.

As for the RAV4, it comes standard with a 7-inch touchscreen and smartphone integration. It also comes with a Wi-Fi hotspot and satellite radio, both of which are only available on higher trims of the Escape. Some buyers may also be interested to know that the RAV4 comes with Amazon Alexa compatibility.

Both the RAV4 and the Escape have easy to use infotainment systems, particularly when the Escape is upgraded to the Sync 3 option. They both utilize touch and physical controls in a way that makes sense. The layout of the Escape is a bit easier, with all of the controls within the driver's reach without much stretching.

For both these SUVs, a six-speaker audio system is standard. The Escape offers a 10-speaker premium system from Bang & Olufsen as its available upgrade. Select models of the RAV4 will give drivers an 11-speaker setup from JBL.

As for the Insurance Institute for Highway Safety, it named both of these vehicles as top safety picks. They performed six different types of crash testing on both options. A rating of "Good" was received in all categories by both the Escape and the RAV4.

The RAV4 comes standard with similar features, which a few important differences. It adds adaptive cruise control with trace assist and traffic sign recognition to its list of standard features. However, this list is lacking the blind-spot monitoring and rear cross-traffic alert, both of which become available on higher trims. The RAV4 also does not have a driver drowsiness list as a standard or even available feature.

Rain-sensing windshield wipers and a surround-view camera system are both available for the RAV4. The Escape offers only rear parking sensors, while drivers can get both front and rear ones on the RAV4. Buyers can also get a rearview mirror camera on only the RAV4.

Both the 2020 Escape and RAV4 have higher than average starting prices for this vehicle class. For the Escape, buyers will be looking at approximately $24,885 for the S trim. The RAV4 starts even higher at $25,850. Deciding to go with a fully-loaded version of the Escape starts at $33,400.

Going with a higher level RAV4 also costs considerably more. Those wanting luxury features will likely go with the Limited, which starts at $34,480. Adventure-seekers will want the TRD Off-Road, which will set them back at least $35,180. Getting an upper-level RAV4 with all the optional bells and whistles can cost as much as $40,000.

Kelley Blue Book provides estimates regarding how much a vehicle will cost to own over the course of five years. For the entry-level S trim of the Escape, drivers are looking at just over $17,500 out-of-pocket expenses. The vehicle is also estimated to lose about $16,000 in value during that time period. As a result, KBB estimates that it will cost drivers $0.45 per mile to drive.

The RAV4 does a bit better. While out-of-pocket expenses for that five year period are estimated to be about $18,300, the loss of value sits at just $14,500. Based on this, drivers should think of it as costing about $0.44 per mile to drive. While both vehicles should cost approximately the same to maintain and repair, Kelley Blue Book estimates it to cost over $600 more to insure the RAV4 over five years.

For most drivers, the 2020 Ford Escape will be a better option than the 2020 Toyota RAV4. The Escape has more standard driver aids, a truly impressive predicted reliability rating, and is simply more fun to drive. While it may be a little more expensive over the years, particularly when powered by the 2.0L engine, it has enough features to justify the cost.

The RAV4 will have its fans, however. It does offer up more cargo space, which may be a deciding factor for some. The RAV4 also has more standard tech features, including smartphone integration. It also offers up a better fuel economy when comparing non-hybrid models. When the price is the deciding factor, the RAV4 may be the way to go.

Save Money on a 2020 Ford Escape:
Are you Shopping for a New Vehicle? Find the Best Deals with "Free - No Hassle" Prices Quotes.