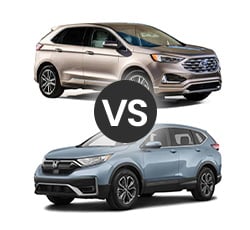 It’s no secret that crossover SUVs now rank among America’s best-selling family vehicles. The 2021 Ford Edge remains a great option. Its comfortable interior and sharp-looking exterior styling will appeal to a lot of families. Another solid pick is the 2021 Honda CR-V, which excels in all the most important categories. In this head-to-head match, we’ll find out which one of these two-row crossovers is the better choice.

The 2021 Ford Edge allows car shoppers to choose from two different powertrains. Most trim levels feature a 2.0-liter, EcoBoost (turbo) four-cylinder engine. Ford rates it to push out a solid 250 horsepower. Drivers who desire a more engaging performance can step up to the sportier Edge ST. Its twin-turbo V6 engine churns out 335 horsepower. While the base engine uses an eight-speed automatic transmission, a special seven-speed gearbox is featured on the more powerful Edge ST.

There’s only a single powertrain available for the 2021 Honda CR-V. Its turbo four-cylinder engine pushes 190 horsepower. To enhance fuel economy, Honda pairs this engine with a continuous variable transmission as opposed to a traditional automatic gearbox.

When equipped with its base engine, the Ford Edge packs enough performance to please most drivers. Road tests show the SUV takes around 7.5-7.8 seconds to hit 60 mph. This means owners will have no issues accelerating past traffic. While the Edge’s transmission performs well in most situations, some owners have complained about occasional gear hunting. Driving enthusiasts will especially like the Edge ST’s extra kick. It clocks an swift 0-60 mph time of 5.8 seconds.

Despite packing significantly less power under the hood, the Honda CR-V has no trouble keeping pace with its stronger rival. A lighter design enables the CR-V to post a competitive 0-60 mph time of 7.8 seconds. The SUV’s continuous variable transmission proves to be smooth and responsive. With that said, don’t expect the CR-V to come close to matching the performance of the high-powered Edge ST.

The 2021 Ford Edge isn’t bad on gas. According to the EPA’s fuel economy estimates, this SUV should return roughly 21 mpg town/29 mpg freeway on regular unleaded. Opting for all-wheel drive only slightly lowers the Edge’s rating. Meanwhile, expect the fun-to-drive ST model to deliver up to 19 mpg town/26 mpg freeway. Keep in mind that all-wheel drive comes standard on the Edge ST.

To no surprise, the smaller Honda CR-V will save the most fuel. It's rated to average 28 mpg town/34 mpg freeway. Opting for all-wheel drive lowers this rating to 27 mpg town/32 mpg freeway. Regular unleaded gas is the recommended fuel grade.

On the road, the Edge showcases its athletic driving dynamics. It handles better than the typical midsize SUV. Automotive reviewers applaud the Edge for its lack of body lean when taking curves. A standard sports-tuned suspension and optional summer tires make the Edge ST feel even more poised.

While the CR-V isn’t known for its sporty road manners, it inspires drivers with plenty of confidence. A responsive steering system enhances the CR-V’s maneuverability. This is an easy vehicle to drive in the city and on the interstate.

When equipped with all-wheel drive, both of these crossovers will deliver an admirable performance on snowy roads. Families will also be able to take these vehicles of a camping trip. However, they are not rugged enough to handle the rough backcountry. There’s not much undercarriage protection when driving over adverse terrain. Off-road features, like trail-rated shock absorbers and hill descent control, are simply not offered.

The better crossover for towing is clearly the Ford Edge. When equipped with a towing package and all-wheel drive, it can handle up to a 3,500-pound load. By comparison, Honda lists the CR-V with only a 1,500-pound maximum towing capacity.

The CR-V has a confidence-inspiring braking system. According to the latest 60-0 mph braking tests, it takes the CR-V an average of 116 feet to come to a complete stop. Expect the Edge’s stopping distance to be a few feet longer. However, high-performance brakes are offered on the Edge ST. They reduce this model’s stopping distance to a short 108 feet.

In terms of long-term reliability, the Edge receives a 3.5 out of 5.0 rating from RepairPal. This is slightly above average for the class. On the other hand, a 4.5 out of 5.0 reliability rating puts the CR-V among the segment leaders. Both SUVs come from the factory with a 60,000-mile powertrain warranty. Owners will also receive 36,000 miles of bumper-to-bumper protection.

The 2021 Ford Edge scores well in the ride quality category. Its standard suspension does a good job of filtering out bumps. Expect the sportier Edge ST to deliver a stiffer ride. When encountering dips in the road and broken pavement, passengers will likely feel a few more vibrations. All versions of the 2021 Honda CR-V deliver a bump-free ride. This crossover’s suspension performs well on every type of road surface.

When it comes to interior quietness, the Edge doesn’t fail to impress. Its well-insulated cabin manages to mute any outside noise. At times, it feels as if you’re riding in a legitimate luxury vehicle. Expect the CR-V to be a bit louder on the inside. This is especially true when traveling at interstate speeds. With that said, most people are unlikely to have any big complaints about the CR-V’s level of quietness.

In terms of outward visibility, the Ford Edge has some weaknesses. According to some test drivers, large windshield pillars limit their view of the road. Meanwhile, thick rear roof pillars increase the number of blind spots. Most experts agree that the CR-V’s overall visibility is a tad better. However, drivers must remain of the CR-V’s rear blind spots when switching lanes.

Regardless of which one of these SUVs a person chooses, their family and friends will have ample space to unwind. However, the Ford Edge is classified as a midsize model, which makes it even more accommodating. There’s nearly 114 cubic feet of passenger room inside the Edge, which outclasses the CR-V’s total passenger volume of 102.9 cubic feet. While rear legroom is similar, the wider Edge provides significantly more hip room.

The advantage in overall seat comfort slightly goes to the Honda CR-V. Its seats provide good bolstering and cushioning. While the Edge’s seats are mostly comfortable, some people have complained about a lack of side support. However, only the Edge offers ventilated front seats and heated second-row seats.

There’s not a dramatic difference in storage space between these crossovers. They provide an identical 39.2 cubic feet of cargo space in the back. Folding down the rear seat further enhances the cargo-carrying volume. A hands-free liftgate is offered on the upper trim levels.

For 2021, the Ford Edge receives an updated SYNC 3 infotainment system. Every trim is now equipped with a new 12.0-inch touchscreen with smartphone connectivity. This vertically oriented display is among the largest in the class. Most importantly, drivers will enjoy the interface’s ease of use.

Drivers who prioritize passenger safety will love the 2021 Ford Edge. It scored a flawless rating in each of the NHTSA’s key impact tests. In the event of a crash, families will remain well protected. While the Edge was also named a Top Safety Pick by the IIHS, this crossover’s standard headlights only managed to earn a “Poor” rating. Luckily, the available adaptive headlights perform better.

Like the Edge, the 2021 Honda CR-V earned a five-star overall safety rating. However, it did not receive a perfect score in the NHTSA’s front passenger-side crash test. An IIHS Top Safety Pick award further highlights the CR-V as a secure family hauler.

Both of these crossovers come standard with a collection of accident-avoidance technologies. Among the Edge’s active safety features include pre-collision braking with pedestrian warning, lane keeping, blind-spot monitoring, and automatic high beams. While the CR-V does not come standard with blind-spot monitoring, it does feature adaptive cruise control on all trims. Another great feature is the CR-V’s road departure mitigation system, which helps prevent you from intentionally driving off the road.

While the base CR-V is a great value, it’s missing a few highly desirable features. A big drawback is the base CR-V’s dated infotainment system, which does not provide a touchscreen or smartphone integration. Among the Edge’s other exclusive standard features include a Wi-Fi hotspot, satellite radio, dual-zone automatic climate control.

Both of these crossovers prove to be fantastic options. They will appeal to drivers who are hunting for a practical family vehicle. However, which one of these models is better? If cost and fuel efficiency are big factors, car shoppers should choose the new CR-V. On the other hand, folks seeking an elevated level of luxurious and performance should go with the Edge.

Drivers who demand the best fuel economy will favor the 2021 Honda CR-V. It returns very good gas mileage without giving up a lot of performance. On the other hand, the 2021 Ford Edge ST is especially fun. Driving enthusiasts will love its much stronger acceleration and more aggressive handling.

From a styling standout, the Ford Edge ranks among the most attractive models in its class. Racier exterior treatments help the Edge ST-Line and high-performance Edge ST to stand out. While the CR-V also has a sharp appearance, it doesn’t look as sporty as the Edge.

Like the Edge, the CR-V excels in the area of passenger comfort. However, a greater number of premium luxury features are offered on the Edge. This includes a hands-free parking system, ventilated front seats, and a 12-speaker Bang & Olufsen sound system.

Save Money on a 2021 Ford Edge:
Are you Shopping for a New Vehicle? Find the Best Deals with "Free - No Hassle" Prices Quotes.