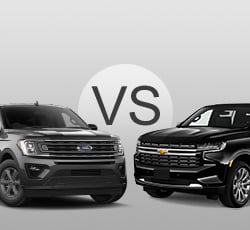 2021 Expedition vs Suburban - How do they stack up? Which is Better?

When it comes to three-row family haulers, the Ford Expedition and Chevrolet Suburban have been mainstays for many years. Over the years, both SUVs have gotten good at giving drivers and their loved ones what they need. They may not be the easiest vehicles to maneuver around town, but many drivers overlook this for the large amount of passenger and cargo space they offer.

The 2021 Chevrolet Suburban was completely redesigned for this year. It introduces an independent rear suspension, which is a first for this SUV. The 2021 model is also longer than last year's model, has more technology features, and even now offers a diesel engine option.

Meanwhile, the 2021 Ford Expedition is still in its fourth generation, which debuted in 2018. A two-row version of this SUV makes its debut, which may broaden its appeal. The Ford Co-Pilot 360 bundle of driver aids also is available on more trim levels than in years past.

Is the redesign of the Suburban enough to give it an edge? Or will the Expedition continue ruling the roads? Let's take a look at how these two vehicles compare.

Perhaps giving the Suburban its biggest edge is the availability of a turbo 3.0L inline-six-cylinder engine that makes 277-horsepower and 460 lb-ft of torque. Just like the Expedition, all models of the Suburban come with a 10-speed automatic transmission.

When comparing the standard engines, the Expedition is the more fun SUV to drive. It produces quite a bit more torque, which translates into more satisfying and responsive acceleration. Steering response is adequate for both of these large SUVs. Both of these models come standard with rear-wheel drive and offer four-wheel drive on most trim levels.

Many families want a large SUV that can also tow along a small trailer or boat. The Ford Expedition can tow between 5,900 and 6,000 pounds when properly equipped. Select Suburban models can go all of the way up to 8,300 pounds. This is a significant enough difference that it may just be the deciding factor for some.

Neither the Expedition nor the Suburban was designed with tight city streets in mind. That said, they both handle nicely and maneuver as well as one could hope for considering the size of the vehicle. Both vehicles absorb bumps in the road, although those who go with the Expedition will want to steer clear of the optional 22-inch wheels.

The 2021 Suburban is available with an air suspension as well as Magnetic Ride Control. They can make adjustments to the shock absorbers as needed. Models with these features equipped are pricey but incredibly smooth.

Finding somewhere to put the Suburban may require patience when in crowded parking lots. Many drivers may even find that this behemoth does not fit in their garage. This vehicle is 226-inches long and 76-inches high. Expedition models with the standard wheelbase, on the other hand, measure in at 210-inches in length, more than a full foot shorter than the Suburban. Even the Expedition Max is only 222-inches long. Both wheelbase options are 76-inches tall.

There are a few seating configuration options for both of these vehicles. The entry-level Expedition actually only comes with two rows and the ability to seat five. Choosing any other trim will mean getting three rows and room for either seven or eight, depending on whether or not buyers want second-row captain's chairs.

The standard setup for the Suburban seats eight. Buyers can opt for second-row captain's chairs in this SUV as well, reducing the seating capacity to seven. One thing that makes the Suburban unique is its ability to have a front-row bench seat, giving it the ability to seat nine.

Many people would assume that the Suburban offers more space for passengers to stretch out. In reality, it depends on where they are sitting. For the third row, the Expedition has over four more inches of legroom. It also has two extra inches of hip room, although the Suburban has an inch more headroom.

The Suburban does have more second-row legroom, but only by half an inch. Taller people will have more space in the second row if they are in an Expedition, which has over an inch more headroom compared to the Suburban. The 2021 Suburban beats out the 2021 Expedition in every measurement category when it comes to the front row. Parents will be comfortable in the front of the Expedition as well, which is not smaller than the Suburban by much.

It is no surprise that both of these vehicles offer plenty of cargo space. For the standard Expedition, there are up to 20.9 cubic feet behind the third row and a maximum cargo capacity of 104.6 cubic feet. There is also the Expedition Max with an extended wheelbase. This model does not have any extra room for passengers, but it does have quite a bit more for gear. Behind its third-row, this version has 36 cubic feet. With both back rows up the cargo space opens up to 121.5 cubic feet.

As impressive as all of those numbers may be, they do not compare to what the Suburban gives you. Behind its third-row, there are 41.5 cubic feet. Drivers can leave the second row of seats up and gain access to an amazing 93.8 cubic feet. The cargo space goes all the way up to 144.7 cubic feet with both back rows down. This is up 23 cubic feet from the 2020 model of the Suburban.

When it comes to the infotainment system, the 2021 Expedition is still using the Sync 3 setup. This will meet the needs of most drivers adequately, although it does not seem as modern or high-tech as the systems in other vehicles. An 8-inch touchscreen is standard across the board. It would be nice to see the Expedition get the Sync 4 system, which is already standard on 2021 models of the Bronco and F-150.

Chevrolet gives the Suburban a 10.2-inch touchscreen for its newly updated infotainment system. The placement of the screen, which is within easy reach and view, shows how this SUV was designed with the driver in mind. Everything about the infotainment system in the Suburban is designed to make it easy to use. Both the Expedition and Suburban offer physical controls on top of the touch controls for added convenience.

The National Highway Traffic Safety Administration tested the 2021 Expedition and gave it an overall score of five stars. Buyers should be aware that while five stars were given in both frontal and side collision testing, the SUV received only three stars for its rollover test. Still, safety scores are one area where the Expedition beats the Suburban.

When it comes to the 2021 Chevrolet Suburban, the overall score was only four out of five stars. While it did receive five stars in side crash testing, it only got four stars in its frontal collision test. Like the Expedition, the Suburban got three stars in rollover testing.

Both of these vehicles come with a respectable list of standard advanced safety features. It is worth noting that the Expedition has blind-spot monitoring and rear cross-traffic alert on all models, while the Suburban has these as merely available features. On the other hand, the Suburban has the increasingly popular rear-seat alert, which is not available for the Expedition.

Select models of the Suburban are also equipped with a heads-up display. This handy feature, which projects info into the driver's line of sight, is not available on any 2021 Expedition trim levels. Working in the Expedition's favor is the availability of a sophisticated parallel and perpendicular park assist features, which is missing from the Suburban.

Neither of these SUVs comes cheap. For the 2021 Expedition, the two-row model starts at $49,995. This is around average for large SUVs, however, buyers who want the third-row will be paying more like $52,810. That is quite a bit for a low trim level. The most expensive model would be the Expedition Max Platinum, which will set drivers back roughly $76,000.

The 2021 Suburban is far from cheap, starting off at $51,700. This is higher than average for a three-row SUV but still less than what a three-row Expedition will cost buyers. At the very top of the trim ladder is the High Country, which starts out at $75,300.

Many buyers also factor in the five-year cost-to-own of a new vehicle. The 2021 Expedition and 2021 Suburban perform similarly in this category. With its EcoBoost engine, the Expedition should cost roughly $1,000 less when it comes to fuel. On the other hand, the Expedition depreciates far more in a five-year span than a Suburban. When looking at the entry-level models of both vehicles, the Suburban is estimated to cost approximately $4,500 less over time.

The Chevrolet Suburban provides more space for both people and cargo. Unlike the Expedition, it also gives buyers two optional engines to consider. And while the Expedition may be more fuel-efficient, the Suburban still ends up costing drivers less in the long run.

Technology is another area where the Suburban pulls ahead, thanks in part to its standard 10.2-inch touchscreen. Driver aids are more or less a draw, with each SUV including several on their standard equipment list. Both vehicles have similar warranties, taking this factor out of the equation as well.

At the end of the day, the 2021 Chevrolet Suburban is the clear winner when compared to the 2021 Ford Expedition. Perhaps Ford will launch a new generation of its SUV in the near future and regain the lead. For now, stick with the Suburban.