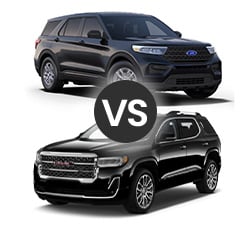 2021 Explorer vs Acadia - How do they stack up? Which is Better?

The SUV market is a crowded one, making it hard for brands to make their vehicles stand out. Many families have decided that a midsize SUV is an ideal size without being too bulky or hard to drive. There is no indication that the popularity of this vehicle class is going away any time soon, either. As a result, both the 2021 Ford Explorer and the 2021 GMC Acadia have pulled out all of the stops to win buyers over.

When it comes to the 2021 Explorer, Ford has added heated seats on the XLT model. There is also a new Sport Appearance Package, which will make the SUV look more athletic without actually changing the performance. If drivers truly want a more powerful Explorer, they have to go with the ST model.

The GMC Acadia ups its appeal to families by giving the Pro Safety Plus package to several trim levels. There is a new Elevation Edition available for select trims, which adds things like 20-inch black wheels and exterior accents to the Acadia. There is also a new Technology Package, which includes a 360-degree camera system and a head-up display.

Both of these SUVs have three rows of seats and are typically considered well-rounded options and smart buys. With their new upgrades, does either the 2021 Ford Explorer or the 2021 GMC Acadia gain an obvious edge? Consider the information in the following guide before making a decision.

There are two engines available for the Explorer in 2021, both of which are powerful enough to handle a vehicle of this size. The majority of trim levels get going using a turbo 2.3L four-cylinder engine that generates 300-horsepower and 310 lb-ft of torque. For the ST and Platinum models, the Explorer swaps to a turbo 3.0L V6 that produces 400-horsepower and 415 lb-ft of torque. A ten-speed automatic transmission is standard either way, and rear-wheel drive is the norm. All-wheel drive is optional.

With its standard engine, the Acadia is adequate at best. The optional two engines are more energetic and satisfying. It is also worth noting that the Acadia is considerably lighter than the Explorer. In fact, the lightest models of the Explorer weigh nearly as much as the heaviest Acadia. As a result, the difference in horsepower is not as obvious when driving these SUVs as one would assume.

The standard setup for the 2021 Explorer gets better-than-average fuel economy numbers. It is estimated to give drivers 21mpg in the city and 28mpg on the highway. As expected, the V6 does not do as well. With it under the hood, the Explorer gets up to 18mpg city and 26mpg highway.

If towing is a concern, the Explorer is the winner. When it is properly equipped, this midsize SUV can bring along up to 5,600 pounds. At the same time, the 2021 Acadia tops out at just 4,000 pounds.

When evaluated by J.D. Power, the Explorer was predicted to be more reliable. It received a score of three out of five, which is average. The Acadia did slightly worse, receiving only 2.5 out of five. The warranty coverage does not differ between these two SUVs, with both getting the three-year or 36,000-mile limited and five-year or 60,000-mile powertrain coverage.

The next area of concern involves the experience inside of these two vehicles. Drivers will find that the 2021 Explorer handles reasonably well and provides sharp steering. Overall, the Acadia is the more athletic choice, however. It has a suspension that is more capable of absorbing bumps in the road and is easier to move in tight spaces.

Either the 2021 Explorer or 2021 Acadia will offer seating for seven. They both can swap out the second-row bench seat for captain's chairs, effectively reducing their seating capacity to six. The Acadia AT4 trim level actually only has two rows of seating, meaning it has room for five.

Both the Explorer and Acadia offer spacious and supportive front seats. The Acadia has more room for stretching out in the second row. When it comes to the third row, both of these midsize SUVs are lacking in space. This is not unusual for midsize SUVs who are trying to squeeze in that third row.

The Explorer has more cargo space, making it the more practical option. There are 18.2 cubic feet in the very back, 47.9 cubic feet behind the second row, and it tops out at 87.8 cubic feet with the back rows down. These numbers beat out many competitors.

As for the Acadia, it has only 12.8 cubic feet behind its third row. This is due to it being significantly shorter than the Explorer, which adds to maneuverability but may detract from practicality. Behind the second row, there are 41.7 cubic feet. The maximum cargo capacity is 79 cubic feet.

Tri-zone automatic climate control is standard for the Explorer and Acadia on all models. The Explorer also has a power-adjustable driver's seat in all trim levels, while the feature is missing from the base Acadia. Both of these SUVs have decent cabins but have too many plastic pieces to be considered upscale.

When it comes to infotainment and connectivity, these two SUVs have similar standard features. They both have an 8-inch touchscreen, Apple CarPlay, Android Auto, and a Wi-Fi hotspot. The Explorer comes standard with four USB ports, while the Acadia gives families at least five. Both of these vehicles also have six-speaker audio systems and satellite radio on all models. Either infotainment system will be easy for drivers to learn.

Wireless device charging and a rear-seat entertainment system are available on both the 2021 Explorer and 2021 Acadia. While the Acadia's upgraded sound system is an 8-speaker Bose setup, the Explorer offers a 14-speaker system from Bang & Olufsen. The Explorer also offers a 10.1-inch touchscreen and 12.3-inch customizable driver display.

The test scores from the National Highway Traffic Safety Administration for the 2021 Explorer and 2021 Acadia are identical. These midsize SUVs both got an overall score of five out of five. A five-star rating was also given in frontal and side collision testing. Four stars were given to both midsize SUVs in rollover testing.

The 2021 Ford Explorer is going to cost buyers more than the 2021 Acadia at nearly every trim level. The base Explorer starts at $33,000, which is above average when compared to the class. As for the entry-level Acadia, it starts out at $29,800. This is considered closer to average. A top-of-the-line Explorer is going to cost around $59,000, while the top Acadia starts at $46,300.

Ford may be able to justify the extra costs. It does have a much more powerful engine, for starters. The Explorer also has more of the advanced driver assistance features that buyers are after.

Looking at the initial cost is only step one when it comes to determining value. The second step involves looking at how much the SUV will cost as the years go on. This is where Kelley Blue Book and their "five-year cost-to-own" estimates can come in handy.

While the Acadia may look like the better value at first glance, a closer look at the numbers reveals that the Explorer is actually the way to go. Not only does it come with more power and more features, but it also will cost drivers less as time goes on. The Explorer also holds on to its value better, which will come in handy when it is time to trade it in or sell it.

The 2021 GMC Acadia is a reasonably affordable SUV with a lot of perks. It has the more comfortable second-row when compared to the Explorer, and has a lower starting price. The Acadia is also arguably easier to drive in certain situations. In every other way, however, the Explorer is the superior choice.

Both of the engine options for the 2021 Ford Explorer are powerful yet decently efficient. This SUV also has more cargo space, safety features, and available technology. Most families will be happier, in the long run, spending a little extra money upfront on the 2021 Explorer than they would be settling for the 2021 Acadia.