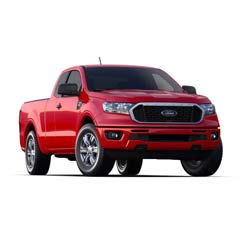 What 2021 Ford Ranger Trim Level Should you Buy? What is the Difference Between Trims?

The Ford Ranger is a capable mid-size pickup truck. It could be ideal for those customers who have heavy loads and/or large items to transport, either occasionally or on a more frequent basis. It's a good-looking model that feels modern and comfortable, and Ford has made many high-end amenities available to those who have the budgets to accommodate their nicer tastes.

All of the three trims of the Ford Ranger run on the same type of engine. It's a turbocharged 2.3-liter engine with four cylinders. It does a great job of delivering power to the wheels, as it comes with 270 horsepower and 310 pound-feet of torque. This should be more than enough capability for the average driver. However, there are always people out there who want to maximize their possibilities; they may want to look elsewhere for more power.

Rear-wheel-drive Ford Rangers have an estimated fuel economy of 21/26 (city/highway) miles per gallon. With all-wheel drive, the Ranger can earn up to 20 miles per gallon in the city and 24 miles per gallon on the highway. These numbers aren't amazing, but they aren't bad either.

Due to a difference in design, the rear-wheel-drive Ranger sits 8.4 inches off the ground while the four-wheel-drive model has a ground clearance of 8.9 inches. From behind the steering wheel, the driver can feel tall and in command of the road.

Ford has matched the engine with a ten-speed automatic transmission. Transitions are seamless, and the truck will be able to provide sufficient power at various speeds. When equipped with the proper tools, the Ranger can tow up to 7,500 pounds. If people want to load up the truck itself with items, they can put up to 1,860 pounds in the truck.

Compare the 2021 Ford Ranger XL vs XLT Trim Levels. What is the difference?

In terms of mechanics, the XL and XLT have the same components, so there's not going to be a noticeable difference in terms of how they handle. Both can come with a 4x2 or 4x4 drivetrain. With 4x4, the truck has an electronic-shift-on-the-fly system.

The XL rides on 16-inch wheels, but it has the option to get 17- or 18-inch wheels. Those 17-inch options are the same type of silver-painted aluminum wheels that are standard on the XLT. On the XLT, there are many more available wheels in case someone wants a different look.

In addition, both trims come with Ford Co-Pilot360 Technology. This consists of various monitoring and mitigation systems that can help drivers stay out of harm's way. The rear view camera can come into play on a regular basis, as can the standard AdvanceTrac stability system. With pre-collision warning and automatic emergency braking, the Ranger can take action on its own to hopefully avoid hitting another vehicle. Trailer Sway Control and Curve Control are other standard safety features.

On the XLT, there are a few more mechanisms in place to protect passengers. Automatic high beams can light up particularly dark roads, and lane-keeping can correct steering in order to keep the truck centered in a lane. Blind spot monitoring and rear cross-traffic alert, which are standard on the XLT and optional on the XL, can be very useful. Since it's hard to see in every direction, drivers may rely on them quite heavily.

Another notable upgrade in the XLT is the power-locking tailgate. In contrast, the XL just has a manual-locking one, though it could be upgraded. The XLT has steel and body-color bumpers while the XL has steel and black bumper components. Fog lamps are an addition on the XLT to the set of exterior lights.

Inside the cabin of these two trims, the differences continue. The XL comes standard with cloth bucket front seats, and it has the option to get vinyl seats. The XLT has premium cloth seats that seem a little more refined. Plus, the XLT has a dual-zone climate system, cruise control, and carpeted floor mats instead of vinyl floor coverings.

Both trims have FordPass Connect technology so that they can act as Wi-Fi hotspots. The XLT comes standard with SiriusXM and SYNC 3 technology. SYNC 3 incorporates voice-activated technology to make it easy to interact with, and it uses an eight-inch touchscreen equipped with Apple CarPlay and Android Auto. It's nice that the XL and XLT are available with navigation.

To keep people aware of how their vehicles are doing, the XL has a 2.3-inch productivity screen. It might be small, but it's useful. On the XLT, the screen measures 4.2 inches and has color. This can make the text easier to read, and this can be an important point since people should mostly be focused on the road ahead.

Note that the XL and XLT (and Lariat) can either be configured as SuperCabs or SuperCrews. The SuperCab is paired with a six-foot bed, and the SuperCrew has a shorter five-foot bed. The SuperCab has a seating capacity of four, and it has 30.4 inches of leg room in the back seat. Since it has a more spacious cabin, the SuperCrew can seat five people. It has a second-row leg room of 34.5 inches, which adult passengers may feel is much more reasonable.

Customers will have to decide whether they want the extra cabin space or the longer bed. Unfortunately, people won't be able to have both the larger cabin and larger truck bed.

The SuperCrew XLT has a rear bench seat with storage under the seat. In the SuperCab XLT, there are also under-seat storage compartments, and there are removable cushions.

Compare the 2021 Ford Ranger XLT vs Lariat Trims. What is the difference?

The Lariat is the top-level trim, and it certainly looks the part. It has 18-inch wheels with stealth gray pockets that look pretty imposing. To light up the truck bed, there's a LED cargo lamp. This is a nicer element than the halogen cargo lamp found in the lower trims. Also, the Lariat has LED fog lamps, LED Daytime Running Lamps, and LED headlights and taillights. LEDs are very effective at their job, and they help the truck look more modern.

Several other exterior features of the Lariat are of a higher quality than those in the XLT. The Lariat has chrome surrounding its grille instead of silver. It has power-folding side mirrors that have heating elements and integrated turn signals. Those mirrors have body-color skull caps, and there's the option to get chrome ones.

At the back of the Lariat's cabin, there's a tinted glass window that can be slid open. That window comes with a defroster, too. In the XLT, the rear window is fixed and can't let in any air or give people access to the cargo area from the cabin. The XLT's rear window also doesn't have a defrost function.

In terms of safety, the Lariat's components are fairly similar to what's found in the XLT. However, the Lariat has reverse sensing as a standard feature. It can notify a driver if the truck is getting too close to objects while backing up. The audible alert gets more repetitive as the truck gets closer to those obstacles. Forward sensing and rain-sensing wipers are available on the Lariat but not options on the XLT.

One main way in which the Lariat distinguishes itself from the XLT is related to the seating. The Lariat is the only trim in which there are leather seats, and the seats in front are power-adjustable. Matching the nicer upholstery are a leather-wrapped steering wheel and carpeted floor mats with a Nubuck leather edge. Ambient lighting adds to the upscale feeling in the truck's cabin.

Drivers of the Lariat will appreciate having Intelligent Access with push-button start. This means that the key fob can stay tucked away in someone's bag or pocket. All it takes to unlock the door is to touch the sensor on the door handle. The push-button start function can be really convenient to use.

Another minor upgrade that can actually be pretty noticeable in certain situations is the Lariat's auto-dimming rearview mirror. When the mirror detects bright lights at night, it will change its setting so that the lights don't shine as harshly in people's eyes.

The Lariat, like the two other trims, can be enhanced with components more suitable for off-roading. For instance, the FX4 Off-Road Package gives the truck special off-road chocks, all-terrain tires with treads that can deal with rough roads, skid plates that can handle some bumps, and the Terrain Management System. That system has several driving modes so that performance can be optimized for driving on grass, gravel, snow, mud, or sand. The FX2 Package comes with special badging and off-road OWL tires, along with an enhanced suspension and electronic-locking rear differential that can help the truck do well when faced with difficult challenges.

A Tremor Off-Road Package is available on both the Lariat and XLT, as long as they are SuperCrew 4x4 models. With this package, the truck gets magnetic-painted alloy wheels that look aggressive, a suspension that's ideal for bumpy terrain, and tow hooks in the front and back. Another included component is Trail Control. (Trail Control is found in some other off-roading packages as well.) With this program, the truck can maintain a set speed on rugged paths so that the driver can focus on steering.

Of course, price is going to be a consideration when deciding which Ford Ranger would be best. The XL trim is the most affordable with a starting price of around $25,000. It could be a great deal for someone who wants a mid-size truck but needs to limit spending. The XLT, in the middle of the lineup, costs approximately $29,000, and the Lariat tops things off with a starting price of around $33,000. These are pretty considerable jumps in cost.

That being said, the two higher trims have many advantages. The Lariat can really make a good first impression with its leather seats, intelligent access, and LED exterior lighting. It feels much more sophisticated than the other trims, even if it doesn't perform any differently. It's actually still competitively priced when looking at some other trucks made by competitors.

The mid-level XLT seems to be a good compromise. It has extra storage under its rear seats, and it has a slightly more refined exterior. Most importantly, perhaps, is the fact that the XLT has better technology than what's found in the base model. Remember that the XLT has a standard eight-inch touchscreen with smartphone connectivity, and it has a high-tech safety package with several additional driver-assist components. Not too many people would pass up the opportunity to stay more aware of other vehicles and potential problems that could lead to dangerous situations.

Ultimately, it comes down to how comfortable people are with spending extra money. With the Ford Ranger, moving up a trim does come with a significant number of advantages.