2022 Ford EcoSport Pros Vs Cons. Should You Buy? 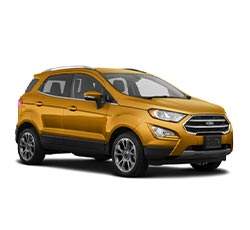 Should You Buy a 2022 Ford EcoSport? Here Are Some Reasons For and Against

The Ford EcoSport is one of many options in the subcompact SUV market. Like most vehicles, it gets several things right, while falling short in other key ways. This is the final year of production for the EcoSport, so anyone who has ever wanted to drive a new one will need to give the 2022 model some serious consideration. The following is a comparison of the pros versus the cons that can help.

Ford introduced the EcoSport in 2018, meaning this vehicle had a pretty short run. For its final year, all models will be coming with all-wheel drive. The previously standard turbo 1.0L three-cylinder engine has been discontinued, which is probably for the best. All models are now utilizing a 2.0L four-cylinder that can produce 166-horsepower and 149 lb-ft of torque. Due to the increased power and standard AWD, the starting price for the EcoSport goes up considerably for 2022.

First, buyers should be aware that the base 2022 EcoSport comes with the mediocre SYNC system. All other models, however, have the SYNC 3 upgrade. It runs on an 8-inch touchscreen that is responsive and easy to learn. Additionally, there are physical control knobs for those that prefer that method. The SE trim level and higher have Android Auto and Apple CarPlay, and all EcoSport models have a Wi-Fi hotspot and at least two USB ports.

One of the biggest selling points for this SUV is its cargo capacity. There are nearly 21 cubic feet behind the second row, which will fold flat when drivers need up to 50 cubic feet to work with. These are excellent numbers for a subcompact SUV. The standard 60/40 split-folding rear seats make it easy to utilize all of the cargo space.

All-wheel drive and increased capability are two main reasons that many drivers choose an SUV over a sedan. Now that all models of the EcoSport have AWD, drivers can feel more confident in this vehicle when the roads get slick. Although no one would accuse the EcoSport of being particularly off-road-oriented, it does have what it takes for some light adventuring.

Typically speaking, subcompact SUVs are not meant for towing. That said, a properly-equipped EcoSport can handle up to 2,000 pounds. All models are available with a trailer tow prep wiring package to make this SUV ready to handle small trailers.

5. Small & Easy to Maneuver Around Town

Thanks to its size and its incredibly responsive steering, the EcoSport is a dream to maneuver around town. Tight corners and small parking spaces pose no challenges to this vehicle. Even when compared to other subcompact SUVs, the EcoSport is impressively maneuverable. It is smaller than several of its rivals, including the Trailblazer and the Renegade.

Despite the small size, the 2022 EcoSport offers a more-than-respectable amount of space for passengers. This is a two-row SUV that technically can seat up to five, although sticking with four adults or fewer is the best way to ensure that everyone stays comfortable. Three children should be able to sit in the back row easily. Overall, considering the segment of the market, the EcoSport offers an impressive amount of legroom in both rows.

Unlike most tailgates, which open upwards, the EcoSport's tailgate swings out to the side. Naturally, there are going to be mixed feelings about this setup, but there are actually quite a few advantages. It is easier to close for individuals who are not very tall, for example. If nothing else, this quirky feature helps the EcoSport stand out from its rivals.

The EcoSport is not known for its athletic performance, but the available SES trim does make the drive more engaging. This trim gets an exclusive sport-tuned suspension, plus built-in navigation to help find a new adventure. It sits on exclusive black 17-inch wheels, and also comes with a variety of convenient interior upgrades. Examples include an auto-dimming rearview mirror, leather upholstery, and a heated steering wheel.

If sportiness is not the priority, the Titanium trim level of the EcoSport may appeal with its sophisticated design. The exterior is home to chrome and metallic accents. For the cabin, the EcoSport has a nine-speaker sound system from Bang & Olufsen for drivers to enjoy. Like the SES, the Titanium model has genuine leather upholstery and other luxurious upgrades.

Overall, the EcoSport has a sleek exterior design, and alloy wheels are standard across the board. LED running lights and foglights become standard for the SE trim level, and the SES stands out with black exterior accents and its unique wheel design. All models except the entry-level S also come equipped with roof rails for added storage capacity. Paint options include head-turners such as Race Red, Lightning Blue, and Shadow Black Smoke.

Reasons Not to Buy a 2022 Ford EcoSport – The Cons

One of the main reasons to drive a vehicle this small is to get strong fuel economy numbers. The 2022 EcoSport does not deliver on this idea, however, giving drivers only 23mpg in the city and 29mpg on the highway. These numbers lag behind competitors, even when the standard all-wheel drive is factored in.

A rearview camera comes standard for the EcoSport, along with a teen driving program that allows for limitations on secondary drivers. Other than that, the EcoSport has no advanced safety features equipped. Select models add things like rain-sensing windshield wipers, blind-spot monitoring, and rear parking sensors. Common driver aids like lane-keeping assist and adaptive cruise control are not even optional for the EcoSport.

While it is easy to maneuver this vehicle, the ride quality leaves quite a bit to be desired. Most bumps in the road will be felt inside the cabin. Adding insult to injury, the interior of the EcoSport is also quite loud. The EcoSport is not a vehicle that the kids can easily nap in on longer journeys.

While the system found in upper EcoSport trim levels is quite impressive, the entry-level S model has a frustrating infotainment setup. The 4.2-inch screen is hard to read, and there are no smartphone integration tools other than Bluetooth. Entry-level model or not, it is hard to believe a vehicle made for 2022 can be so lacking in tech. The base model costs nearly $22,000, making this lack of features even more vexing.

Hyundai has been making a splash for a while with their affordable and well-equipped SUVs, and the Kona is a shining example. It is a more fuel-efficient choice than the EcoSport, although its base engine is not as powerful. In general, the cabin of the Kona is more pleasing. Android Auto and Apple CarPlay are standard across the board, and the Kona even comes with forward-collision warning and lane-keeping assist standard. On the other hand, the EcoSport has more cargo and passenger space.

At the end of the day, the 2022 Ford EcoSport faces serious competition. It is thirsty yet not particularly powerful, and it seriously lacks driver assistance technology. Seeing as this is the last year, it seems that Ford had little motivation to address these problems. Still, if a buyer needs an SUV that is easy to maneuver in small spaces but will not sacrifice passenger and cargo space, the 2022 EcoSport is a viable option.