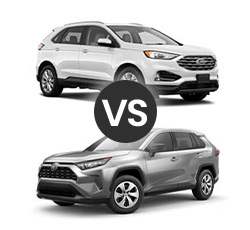 The Ford Edge has a lot of strong competition in its class. One of its top competitors is Toyota's 2022 RAV4. Toyota is known for building reliable, long-lasting vehicles. The RAV4 has respectable off-road capabilities, especially from the TRD trim. It features rugged exterior styling and offers a quiet and comfortable ride.

The RAV4 is close to the same size as the Ford Edge. It comes in at 182-inches long, 73-inches wide and 69-inches tall. Like the Edge, it also has room for up to five people. It offers 37.6 cubic-feet of storage space, or 69.8 cubic-feet with the rear seats folded down. While it's close, the Edge does offer a bit more cargo room.

The 2022 Ford Edge and 2022 Toyota RAV4 both have a lot to offer. There are a few differences between these vehicles that will make them appeal to different people. Here's a closer look at some of their performance specs and features. By comparing both SUVs, we will hopefully help potential buyers decide which model is right for them.

The 2022 Ford Edge has two engine choices. There's the standard Twin-Scroll 2.0-liter EcoBoost engine. This is equipped on all models except for the ST trim. It makes 250 horsepower with 280 pound-feet of torque. Models of the Edge with this engine should get up to 29 miles-per-gallon on the highway.

The high-performance ST models get a Twin-Turbo 2.7-liter V6. This engine produces an impressive 335 horsepower and 380 pound-feet of torque. Even with all of that extra power, the ST trim still offers decent fuel efficiency. It should get up to 24 miles-per-gallon on the highway.

Ford's Intelligent All-Wheel Drive (AWD) technology is standard on all models of the Edge. This system enhances vehicle traction and regulates torque to the front and rear wheels. This creates the perfect balance to avoid slippage, often before it can even occur. The Edge also gets AdvanceTrac® with Roll Stability Control™ and a Traction-Control feature as part of Ford's Co-Pilot360™ technology.

Toyota's RAV4 also has two different engine options. The base engine is a 2.5-liter Dynamic Force 4-cylinder with dual overhead cams and variable valve timing. This engine produces 203 horsepower and 184 pound-feet of torque. There are Eco, Normal and Sport Modes that alter the engine's performance depending on the driving situation.

The RAV4 comes stock with Front-Wheel Drive (FWD), but several AWD systems are available as well. One system offers Dynamic Torque Vectoring with a disconnect for the rear drive-line. The Rav4 with its base engine and FWD can get up to 35 miles-per-gallon on the highway.

Toyota also offers the RAV4 with a hybrid powertrain. This model has a 2.5-liter engine paired with an electric motor. This setup has a combined-horsepower rating of 219. It's the only version of the RAV4 to automatically get AWD. The hybrid has a driving range of 42 miles on electric-only power.

The hybrid RAV4 has a combined fuel-economy rating of 42 miles-per-gallon. This is calculated by the EPA with combined driving in the city and on the highway. Due to its hybrid powertrain, this version of the RAV4 is actually more efficient in city driving than on the highway, making it an attractive choice for anyone who lives the city life.

The Ford Edge has more power and torque. It also has standard AWD for better traction and handling. The Toyota RAV4 offers better fuel efficiency and a hybrid model. The Toyota can save owners quite a bit at the gas pump.

The 2022 Ford Edge has more power and torque than the 2022 Toyota RAV4. Acceleration and passing power are far superior in the Ford Edge. Both vehicles offer great traction and stability thanks to their modern, high-tech systems. Ford offers AWD on every model, giving it the edge when it comes to traction and handling. Things are just about even when comparing an Edge to a RAV4 with AWD.

Both vehicles handle curves well, especially when comparing AWD models. Both have similar brake power and braking smoothness. It's hard to say which vehicle provides the smoother ride overall, as both have solid suspension systems that do their job well. Both Ford and Toyota have done a fine job of sound-proofing these vehicles too.

Ford offers power-operated seats with lumbar support. Leather upholstery is available. Heated and ventilated seats, as well as a heated steering wheel, are available too. The Edge has a Dual-Zone Electronic Automatic Temperature-Control System to keep everyone comfortable.

Toyota has a Dual-Zone Automatic Climate-Control System that's comparable to Ford's setup. This system also has a pollen and dust filter, as well as rear vents, to keep everyone breathing easier. The seats are just as comfortable here, and all of the features mentioned for the Ford Edge's interior can be had for the Toyota RAV4 as well.

Both vehicles have an upscale interior that's nicer than what one might expect at their price points. Both have beautiful interior designs with smart layouts. There's ambient lighting inside of both SUVs. The Toyota seems just a bit more stylish and upscale in appearance, but the Ford is just as comfortable to be in.

This category of features is one of the most important factors to consider when purchasing a new vehicle. Fortunately, both the Ford Edge and the Toyota RAV4 come equipped with plenty of standard safety features and driver-assist technology. The aforementioned Ford Co-Pilot360 Tech is actually a whole suite of features for safety, as well as for driver convenience.

This tech comes with a rear-view camera. All models have Ford's SOS Post-Crash Alert System. There's Ford's BLIS® System that monitors both blind-spots and cross-traffic. This system really gives the driver a heads up on their surroundings and potential dangers. There's Roll-Stability Control and Traction Control for a safer, more-stable ride.

In addition to the high-tech stuff, The Ford Edge also has some essential classics like an advanced airbag system. Ford calls this their Personal Safety System. It includes dual-stage front airbags and side-impact airbags for the front seats. There's also knee protection for the driver and front passenger. A side-curtain safety canopy protects the occupants in every row and also has a rollover sensor.

All models of the Edge have a Tire-Pressure Monitor to make sure all tires are safely inflated. Sensors and warnings make sure everyone is alerted to buckle up. There's the standard LATCH system for tethering in child safety seats. The rear doors also feature child safety locks. The Edge also has a Keyless-Entry feature and an available perimeter alarm.

The Toyota RAV4 also has an advanced airbag system with a total of eight airbags. This includes front and side-impact bags similar to what Ford offers. There's knee protection up front. There are side-curtain airbags to protect the rear passengers. The front passenger also gets a seat-cushion airbag.

The LATCH system found on the Ford Edge is here as well. All of the seat belts are 3-point models. There are also seat-belt pretensioners and force limiters. The RAV4 gets a Tire-Pressure Monitor and rear-view camera, just like the Edge. Some of the other similar safety features include Hill-Start Assist, Stability Control and Traction Control.

The RAV4 has a Blind-Spot Monitor similar to Ford's BLIS technology. It also monitors rear cross-traffic. Toyota Safety Sense 2.0™ is similar to Ford's Co-Pilot360 tech too. This tech package includes a Pre-Collision System that can even detect pedestrians around the vehicle. It also offers Lane-Departure Alert with Steering Assist.

Toyota's Dynamic Radar Cruise Control is more high-tech and sophisticated than Ford's Adaptive Cruise Control. Toyota also offers a better car alarm, complete with an engine immobilizer, just in case someone does manage to steal your vehicle. They won't get too far, thanks to this handy feature.

Both vehicles have a lot of comparable safety features. The Toyota RAV4 often has the better version of a feature offered on the Ford Edge. The Edge, however, offers more standard features, making the lower trim levels a bit more safe than Toyota's comparable trim levels.

The base trim level for the 2022 Ford Edge is called the SE model. It has a MSRP of $37,145. The top trim level is the ST, and it's geared towards high performance. It comes in at $45,945. The trim level right below that, the Titanium model, could be considered the highest trim level that focuses on comfort and luxury. It has a starting price of $42,745.

The 2022 Toyota RAV4 has a starting MSRP of $26,975. The highest gasoline-powered trim level is called the XLE. It comes in at $28,445. The hybrid model is the most expensive RAV4, starting out at $29,575. The RAV4 is significantly cheaper than the Ford Edge at every comparable trim level. It should also save owners money over time with its superior fuel economy.

When it comes to standard features, the Ford Edge does offer more. Just comparing the base-trim levels, the Edge offers quite a lot, while the RAV4 is pretty bare-bones. The base RAV4 does have plenty of safety features and driver-assist tech, but still falls short of what the Ford offers. Also, the Ford offers quite a bit more horsepower for the money.

Toyota has that reputation for reliability and longevity, which is something to consider when assessing overall value. This means there will potentially be lower costs for repairs and upkeep. For those who like to keep the same vehicle for a long time, they will definitely get their money's worth from the Toyota.

Even though the Ford offers more standard features at the base level, the Toyota's highest trim level still comes in at a lower cost than the cheapest version of the Ford Edge. This makes the stock features basically irrelevant. Unless horsepower and performance are top priorities, the Toyota is a better bargain and offers more value.

Both the 2022 Ford Edge and 2022 Toyota RAV4 have their strengths and their weaknesses. Both vehicles really outshine the other in certain categories. When it comes to power and performance, the Ford wins, and it's not even close. When it comes to price, the cost of ownership and overall value, the Toyota wins hands-down.

Both of these vehicles have comfortable interiors. Both offer a smooth and quiet ride. They have very comparable safety features, convenience features and driver-assist technology. When it comes to their exterior appearance and interior designs, it's really just a matter of personal tastes.

One area that we have yet to touch on is the entertainment and connectivity tech. The RAV4 has an infotainment system with a 7-inch touchscreen. A 9-inch screen is also available for the higher trim levels. Bluetooth is available for audio streaming. The system works well with Amazon Alexa, Apple CarPlay and Android Auto.

A navigation system is optional for the RAV4. The RAV4 offers audiophiles a premium stereo and speaker system by JBL. This includes an amplifer, 11 speakers and a subwoofer.

Ford's SYNC 4A Infotainment System is superior in most ways. It's more intuitive to use and comes with a massive 12-inch touchscreen display. It's also compatible with Apple and Android phones, just like the RAV4. It has Bluetooth just like the Toyota system, as well as an optional navigation system. Ford owners can enjoy a B&O® Sound System by Bang & Olufsen® with 12 speakers and a subwoofer.

If performance and entertainment are your priorities, and money is no issue, go with the Ford Edge here. If the lower horsepower doesn't bother you, the Toyota is comparable in almost every other category, and for a seriously lower price. It's really the best bargain and will likely save owners even more over the lifetime of the vehicle. When everything is considered, the Toyota wins the day.