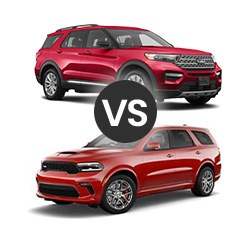 2022 Explorer vs Durango - How Do They Stack Up? Which is Better?

Midsize three-row SUVs are incredibly popular with growing families. Versatility is a major part of the appeal here. Not only can a three-row SUV bring along seven or eight people, but it can also haul quite a bit of gear when needed and sometimes handle light off-roading. The 2022 Ford Explorer and the 2022 Dodge Durango are enticing options in this segment of the market.

The Ford Explorer has been around for decades, and this year it sees a brand-new ST-Line trim. Similarly, the Dodge Durango has been around for many years. This year, a third row has become standard for the first time. The Durango is currently in its third generation, which debuted way back in 2011. For comparison, the Explorer is in its sixth generation, which came out in 2020.

To make the right choice between these two SUVs, buyers should compare them in as much detail as possible. The guide that follows is designed to help.

Most models of the 2022 Explorer are using a turbocharged 2.3L four-cylinder engine that generates 300-horsepower and 310 lb-ft of torque. Mated to this engine is a 10-speed automatic transmission, and the Explorer comes standard with rear-wheel drive. All-wheel drive is also available on all models.

The exciting ST trim level of the Explorer goes with a turbocharged 3.0L V6 that creates 400-horsepower along with 415 lb-ft of torque. This model gets an exclusive sport-tuned suspension. Both the King Ranch and Platinum models also get this engine, but they have the standard suspension.

Many people choose a Dodge vehicle for the power they provide. The 2022 Durango comes standard with a 3.6L V6. While this may sound like it would be more powerful than the four-cylinder in the Explorer, it actually is not. It creates 295-horsepower and 260 lb-ft of torque, which is still very respectable.

The Durango R/T trim level gets upgraded to a 5.7L V8 that pumps out 360-horsepower and 390 lb-ft of torque. This does not quite keep up with the Explorer ST. The Durango also is available with a 6.4L V8, however, that churns out 475-horsepower and 470 lb-ft of torque. All of these engines pair with an eight-speed automatic transmission, and the Durango also comes standard with rear-wheel drive while giving the option of upgrading to an all-wheel drive.

Unfortunately, the Durango is not as efficient with its base engine. It gets 19mpg in the city and 26mpg on the highway. Opting for all-wheel drive will mean these numbers drop to 18mpg city and 25mpg highway. The 5.7L V8 is estimated to get 14mpg city and 22mpg highway. Even less impressive is the 6.2L V8, which gets 13mpg city and 19mpg highway.

The Ford Explorer can tow up to 5,600 pounds when properly equipped. This is around average, but nowhere near what the new Durango can handle. Models with the V6 engine can handle up to 6,200 pounds, while those with the 5.7L V8 can bring along up to 7,400 pounds. Adding the towing package to the 5.7L V8 or choosing the 6.4L V8 will mean having a towing capacity of 8,700 pounds. This is a best-in-class number.

Both of these midsize SUVs are backed by a three-year or 36,000-mile limited warranty. They both also come with a five-year or 60,000-mile powertrain warranty. The team at J.D. Power has evaluated both of these vehicles for their predicted reliability as the years go on. Interestingly, both of these SUVs received a score of 81 out of 100. This is on the low side of the "Good" range.

The Ford Explorer offers balanced handling and a relatively smooth ride. It does struggle a bit on rougher road surfaces, however. If buyers are after an engaging drive, it will be worth choosing the ST for the upgraded suspension. All models provide strong brakes and excellent road grip.

Those who choose the Durango will soon discover that it does better on the highway than it does on city streets. It has a wide turning radius, making it somewhat cumbersome to park and corner with. The Durango also gets a bit jittery when not moving at highway speeds.

There are seats for up to seven people in both the Durango and the Explorer. Either of these SUVs can swap out their second-row bench seat for two captain's chairs instead, effectively reducing the seating capacity to six. There is plenty of headroom in all three rows of the Explorer, but the back two rows are a bit cramped when it comes to legroom. The third row is particularly uncomfortable for adults, due to how low it sits.

The Durango has more space to spread out in. There is plenty of headroom and legroom, particularly in the first two rows. Although the third row may be tight for adults long-term, it provides more space than most of its competitors.

Infotainment systems are similar for these two SUVs. The standard touchscreen for the Explorer is 8-inches, while the Durango shows off an 8.4-inch touchscreen instead. They both have Apple CarPlay and Android Auto on all trim levels. The Explorer comes standard with satellite radio, a Wi-Fi hotspot, and two USB ports. The Durango does not have those first two features, but it does give buyers four USB ports standard.

Both of these SUVs have a 10.1-inch touchscreen on their available equipment list. The Explorer offers a 12-speaker or 14-speaker sound system from Bang & Olufsen. As for the Durango, it can be upgraded to a 19-speaker Harman Kardon premium setup. Rear-seat entertainment systems are available for both of these family-oriented vehicles as well.

Cloth upholstery is standard, while top trim levels of both the Explorer and Durango upgrade to leather. Tri-zone automatic climate control is included as well. The Explorer is slightly more sophisticated, coming standard with a power-adjustable driver's seat. That said, there are a lot of plastics found in the cabin of the Explorer. Despite the aging interior of the Durango, it manages to be quite nice. It has a variety of soft-touch surfaces and an elegant look.

The Insurance Institute for Highway Safety evaluates new SUVs in six main categories. A top score of "Good" was awarded to the 2022 Explorer in all of those categories. Complete testing has not been conducted on the Durango at this time. It has currently received the top score in three categories, and it received the score of "Marginal" for the driver-side small overlap front test.

There are far fewer standard driver assistance features found on the Dodge Durango. It does have a rearview camera, rear parking sensors, blind-spot monitoring, and rear cross-traffic alert. The Explorer has all of these things standard as well, plus driver attention monitoring, forward-collision warning, and lane-keeping assist.

All 2022 Explorer models are equipped with rear parking sensors. They also come with automatic high beams. MyKey, a feature that will let parents limit speed and volume for the secondary key fob, is also standard.

The GT Plus trim level of the Durango opens up the option of adding adaptive cruise control, lane departure warning, and forward-collision warning. This is also the first model that can be equipped with automatic high beams. Select models come with front parking sensors.

Moving onto the new Explorer, it adds extra driver aids at the ST-Line trim level. They include a surround-view camera system, an evasive steering assist, and a lane-keeping system. It also includes adaptive cruise control. The King Ranch trim level adds rear automatic braking, while the top Platinum trim has an automated parking system.

As buyers know all too well, there are many costs associated with owning a vehicle. How much a person will spend running a vehicle over time is known as the "true cost to own." The numbers will vary based on the trim level, but the following comparison of the entry-level models will offer a good idea of which SUV will be more affordable over the course of five years.

A large part of the true cost-to-own estimate is depreciation. The 2022 Dodge Durango is estimated to lose $13,000 in value over the course of five years. Meanwhile, the 2022 Ford Explorer will lose $12,700. As a result, resale or trade-in value is not a good deciding factor between these two SUVs.

Both the 2022 Ford Explorer and the 2022 Dodge Durango are thought of as well-rounded vehicles. They have similar strengths and weaknesses, although there are a few things that stand out. These are the factors that buyers will have to make their decision based on.

The 2022 Ford Explorer comes with a more efficient and more powerful base engine. It can be argued that it has a smoother ride, plus it comes with far more standard driver aids. Drivers will also find more cargo space when they choose the Explorer.

Moving onto the 2022 Dodge Durango, it has a nicer cabin. It also has the ability to tow more than the Ford Explorer or any other competitor for that matter. The back rows of seating are more spacious in the Durango, which may be a big selling point for families with growing children.

The 2022 Ford Explorer is a well-rounded SUV that will serve most families well, although those who need strong towing numbers and more legroom in the backseat will want to consider the 2022 Dodge Durango instead.