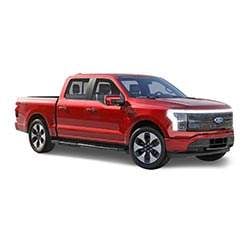 Should You Buy a 2022 Ford F-150 Lightning? Here Are Some Reasons For and Against

Many people in the automotive industry, as well as casual truck fans, have been eagerly anticipating the arrival of the 2022 Ford F-150 Lightning. This is an all-electric truck that has an incredible amount of power and so much advanced technology. The Lightning doesn't require any gasoline, and it's quite capable and convenient to drive. It pushes everyone to think about electric vehicles in a new way, and that's a great thing.

As mentioned, the F-150 Lightning is brand new for this model year. That doesn't mean that people aren't familiar with it, as Ford has definitely been dropping many hints about what it has to offer. The President has even taken the model out for a test spin.

1. Almost an Unbelievable Amount of Power

Working with two electric motors and a battery, the Ford F-150 Lighting can make 563 horsepower and 775 pound-feet of torque. Many traditional trucks don't even come close to these marks. Whether it's heading up hills, towing cargo, or accelerating on the highway, the Lightning feels quick and athletic. It can go from zero to 60 miles per hour in about four and a half seconds.

2. Ready for the Trail

Drivers don't need to be hesitant about taking the Lightning into rugged terrain. It's capable of dealing with rough conditions. A 4x4 drivetrain is standard, and there are metal skid plates and underbody protection. The battery pack, which could otherwise be damaged by debris or rocks, actually has a exostructoure to shield it from damage.

There are several drive modes to select from. One of them is Off-Road mode, and this makes the truck suited to handle challenges.

This truck can tow up to 10,000 pounds. It can haul boats, trailers, campers, and more. The available Pro Trailer Hitch Assist provides useful assistance with steering and speed as the truck gets maneuvered into the exact spot where it needs to be to hook up a hitch. There's also an available Smart Hitch that gives information regarding hitch weight. Trailer Reverse Guidance and Pro Trailer Backup Assist are other available high-tech systems that can make it much easier to move around while towing cargo.

4. Load Up the Truck Bed

Payload capacity is 2,000 pounds, thanks to a durable frame and strong components. There's a system that can be put in place on the Lightning that acts as an onboard scale. With these scales, users can find out their payload weight. An available power-operated tailgate is an extra convenience. The bed measures 5.5 feet, and it can have tool boxes integrated into it to help with organization.

5. A Surprise in the Trunk

Electric vehicles don't require an engine, nor do they require fuel lines, spark plugs, or alternators. As a result, there's a lot of space that's opened up in the vehicle. The trunk of the Lightning isn't a traditional truck trunk. Rather, it's an extra storage compartment. It's sizable, too, having a volume of about 14 cubic feet. It can hold up to 400 pounds of items, and it has tie-downs, a cargo net, and a drain.

6. Places to Get Work Done

It's anticipated that many Lightning drivers will be getting work done while they're out. Maybe they'll have to get some work finished on the computer, or perhaps they need to use power tools to make quick adjustments to their materials. Either way, they can do so in the Lightning.

First, the tailgate can act as a work surface. It can come with clamp pockets and tie-downs to provide workers with a practical place to measure, cut, and take care of other tasks. It can even have a mobile device holder, a place for beverages, and pencil and ruler holders.

In the cabin, there can be a work surface, too, but for computers and tablets rather than drills and hammers. To make the transition from a regular cabin to a mobile office, thehe shifter can be stowed, and a flat surface can be folded out from the center console. Wi-Fi connectivity is nice to have when using devices.

Two types of batteries are available with the Lightning. The standard range battery provides a range of 230 miles. This translates to many hours of driving, and given how prevalent public charging stations are becoming, it shouldn't be a problem to find a place to charge the battery.

The extended range battery has a bit more juice. It offers a range of 300 miles. This gives drivers a lot of freedom.

Many aren't that familiar with how electric vehicles work. Fortunately, there's nothing that's too complicated about them. Batteries can be charged at residences, work places, grocery stores, and public parking lots, as electric vehicles can use regular outlets or fast charging outlets. Ford's Blue Oval Charge Network has nearly 20,000 charging stations across the nation, and the FordPass App can help people locate those stations. The app can be used to pay for charging time also.

A cool feature about the Lightning is that it can act as a generator. If a home ever experiences a power outage, the truck can step in and provide energy. A test revealed that the Lightning can power a home for up to three days, and if power is rationed, it can power certain appliances for up to ten days. It's not everyday that one hears about a truck acting as an external power source for someone's house.

The Lightning isn't just any ordinary pickup truck, as should be clear by now. It can have many sophisticated features that make it feel like a luxury vehicle. It can ride on 20- or 22-inch wheels, which give the truck an added presence. Leather seats, heated and ventilated front seats, and a built-in massage function built into the front seats are some of the amenities that can be found. The truck has a spacious cabin, and the available twin-panel moonroof makes it seem even more spacious.

In terms of technology, the Lighting has everything one might want. It comes with Apple CarPlay, Android Auto, Wi-Fi connectivity, and integrated navigation, along with driver-assist systems. The standard touchscreen measures a massive 12 inches, and there's the option to get an even larger 15-inch touchscreen.

If it seems like the F-150 Lightning comes with so many benefits, it's true. This truck, as mentioned earlier, is a game-changer with all that it can do. Prospective buyers just need to keep in mind that they'll be paying for all of these features. It does start with a price of about $40,000, which isn't so bad, but the costs quickly rise from there. A Lightning with every available component has a cost that's close to six figures.

2. Only One Cab Configuration

The Ford F-150 has a Super Crew cabin configuration. This makes it roomy and comfortable, but it would have been nice if there would have been another option for the cab. Perhaps some buyers don't necessarily need that much space and would have wanted to save some money in the process.

When paying such a large sum for a vehicle, many customers expect to have nice interior features. Unfortunately, the entry-level trim of the Lightning has what some would consider to be low-end amenities. Vinyl seats aren't really anyone's idea of luxury.

Rivian is a newcomer to the market, and it's hitting the ground running. Its R1T model is a strong contender in the electric truck market, but its starting price is considerably higher than the starting price of the Lightning. The R1T doesn't have as large of a front truck, and interestingly, Apple CarPlay and Android Auto aren't standard on the Rivian.

The Hummer has made a return to the market, and this time, it's an electric model. It really has an incredible amount of capability, having up to 1,000 horsepower. The Lightning may be strong, but it can't quite compete in this regard. While the Lightning looks pretty similar to the other F-150s, the Hummer has its own style. Some buyers may be turned off by its chunky frame and military feel.

It's important to note that the Hummer is extremely expensive. Its starting price is over $100,000. Remember that the highest trim of the Lightning gets close to that mark, but there are many Lightning trims that are well under it. This makes the Lightning a much more reasonable choice. It's certainly not cheap, but it doesn't have a six-figure price tag.

If anyone wants to drive a vehicle that's part of the new movement in the industry, then he/she should be looking into electric vehicles. It's clear that this is the direction that things are heading. In the past, buyers may have been concerned about the practicality of owning an electric mode, but this is no longer be an issue. The Ford F-150 Lightning proves that all-electric vehicles can be reasonably priced, highly capable, and decked out with high-tech components.

A vehicle like the Ford F-150 Lightning is one that everyone will surely notice. It looks and feels athletic and is ready to go on adventures. It's a model that makes a lot of sense for those who require the utility associated with pickup trucks.