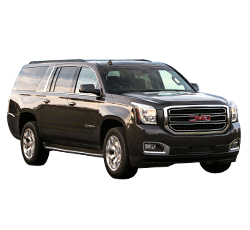 Should You Buy a 2015 GMC Yukon? Here Are Some Reasons For and Against

We are no longer in the glory days of the big SUV, which means that drivers who want one have fewer options. For the most part, consumers now prefer smaller and more fuel-efficient vehicles and this has made the big gas-guzzlers of a few years ago largely obsolete. Largely, but not completely.

Of the options that still remain, the Yukon has to be ranked as one of the best. Not only does it offer construction and ruggedness of a truck, buyers will get a range of amenities most commonly found in luxury SUVs. The 2015 GMC Yukon has been fully redesigned for 2015 and is available in 3 trims: the Denali, the SLE and the SLT.

1. It Has a Lot of Safety Features

For starters, the entire cabin has been encased with a safety cage made from high-strength steel. Standard features include a rearview camera and buyers have the option of getting a head-up display so that they are able to get information in their line of sight thus minimizing the potential for distraction.

There are also options available such as adaptive cruise control and blind spot monitors. The Yukon gets the usual complement of airbags, but also gets some new safety technology such as front-center airbags in those models that have bucket seats.

The 2015 GMC Yukon was given a five-star rating for its performance in crash tests performed by the National Highway Traffic Safety Administration (NHTSA). The five stars were from front and side impact tests and it got a four-star overall score.

Buyers get two engine options. The 2015 Yukon gets the same engine that the Sierra gets, which is a 5.3-L V8 putting out 355 HP and the upgrade from that is the new 6.2-liter V8 that delivers 420 HP. Both engines are paired to a 6-speed automatic transmission and buyers will be able to choose from rear-wheel or four-wheel drive.

Thanks to technology that has only recently been added to the Yukon (like direct injection), gas mileage is reasonable for the class. The Yukon gets 16 MPG in the city and 23 on the highway. Combined mileage is 18 MPG.

The interior has been updated for 2015. The Yukon's cabin now consists of high-quality materials including trim made from wood and aluminum. With the base Yukon, it is possible to seat up to nine if buyers opt for the bench seat in the front row. Standard upholstery in the Yukon is cloth and it also gets power adjustable front seats.

Options include heating and cooling for the front seats and heating for seats in the second row. The Yukon’s instrument panel provides various different types of information ranging from the basics like gas mileage to cylinder deactivation status.

The Yukon now has a valuable feature that has been present in many of its competitors for some time: third row seating that folds into the floor. In previous models, the third row had to be removed if the driver wanted to free up cargo room. This process was troublesome and time-consuming. There is also a power folding third row option that improves the ease with which the cargo space can be accessed.

8. It Has Excellent Noise Cancellation

The cabin of the Yukon is designed to be quiet. Its interior provides excellent insulation from both road noise and wind noise. The doors are inlaid to prevent any noise from outside wind being heard inside the cabin and even the mirrors are designed to minimize wind noise in the cabin.

The shocks in the 2015 Yukon are magnetically controlled. This technology is available only on the more expensive Denali trim and provides the Yukon with the handling of a much smaller vehicle.

One of the areas where the 2015 Yukon excels is in the amount of driver-assist technology. For example, the SLE version comes with a lane change alert that vibrates the driver's seat to indicate when the vehicle has started to change lanes. The Convenience package for the SLE includes features such as a power lift gate and auto-dimming rearview mirror.

11. It Performs Well on the Road

Even with their large size, Yukons are relatively easy to drive. Their frame as has been improved and now provides these SUVs with a firm foundation. The Power steering in the 2015 Yukon is extremely smooth and allows it to snap back to center smoothly. It is both easy to use while also proving good feedback.

12. It Has Excellent Entertainment Features

Standard entertainment features include a Bose sound system that has nine speakers along with an 8-inch touchscreen. There is also a Blu-Ray/DVD system for passengers in the rear seats and a total of five USB ports.

The Downsides of Buying a 2015 GMC Yukon - The Cons

Compared to other vehicles in the class, the cargo room in the non-XL Yukon is on the small side. Seating in the third row may also be somewhat cramped for normal-sized adults, though it is perfectly suited for smaller passengers. The XL version provides considerably improved legroom.

Some reviewers have found that the Yukon’s touchscreen system can be a little on the slow side at times, despite being relatively user-friendly.