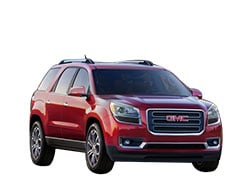 Should You Buy a 2016 GMC Acadia? Here are the Pros and Cons

Although the GMC Acadia’s current design may be due for an update, the large crossover still is still a highly recommended vehicle. Its brawny styling and roomy interior will satisfy a lot of families. When strapped with the optional AWD system, the Acadia also becomes a good performer in the snow. Meanwhile, the crossover’s well-built structure enables it to offer exceptional crash protection.

The SUV’s styling and performance have not changed. However, the 2016 GMC Acadia does feature a revamped OnStar system. The popular communications system now features a Wi-Fi hot-spot.

The 2016 GMC Acadia does not have an optional engine. With a total output of 281 horsepower and 266 pound-feet of torque, the standard 3.6-liter engine is certainly strong enough for most folks. By installing the proper equipment, drivers will be able to tow up to 5,200 pounds. All versions use a six-speed automatic transmission.

Most drivers will be satisfied with the FWD system. However, the AWD system will enable the SUV to handle harsh winters. The system reacts immediately to sudden changes in the road conditions. Drivers can slice through snow without getting stuck. Unlike a full-time 4WD system, the Acadia’s AWD system does not ruin its fuel efficiency.

The Acadia’s suspension has been tuned to provide good comfort. When traveling on a rough surface, the shock absorbers can reduce the amount of interior vibrations. Passengers will also be able to enjoy the ride without experiencing a lot of road noise. Because of the Acadia’s quiet performance, family members can doze off on long road trips.

Although the new GMC Acadia is not the sportiest crossover on the market, it always feels stable on the road. If the driver is cruising along the open highway, the SUV will inspire a great deal of confidence. It is certainly nimbler than some of today’s truck-based SUVs. Fortunately, pulling a trailer does not seem to disrupt the Acadia’s balance.

Families will appreciate the Acadia’s versatile design. The three-row SUV can accommodate up to eight passengers. Adults can easily slide into the third seat if needed. Drivers can also cram a lot of cargo into the back. When hauling a large item, the rear seats will conveniently fold down. Furthermore, the pet-friendly cabin welcomes dogs to ride along.

Families are destined to make good use of the SUV’s Wi-Fi hot-spot. The system’s 4G speed makes it one of the best standard features on the market. Whether the driver is picking up a bite to eat or taking their family on a vacation, they will likely need to access the Internet at some point.

Although the 2016 GMC Acadia is not a heavy-duty SUV, it does have a rugged appearance. The crossover’s bold grille and flared fenders make it look extremely tough. Equipped with 20-inch machined wheels, the exclusive Denali trim will attract a lot of positive attention. Some of the glossy paint colors include White Frost, Ebony Twilight, and Crimson Red.

Aside from the Denali model’s enhanced styling, it also comes loaded with several high-end components. To further reduce the amount of road and wind noise, GMC surrounded the cabin with additional sound-deadening material. While the wood-trimmed steering accentuates the crossover’s luxurious interior, a head-up display helps the driver to keep their eyes on the road.

During the event of a crash, every passenger will be well-protected. The 2016 GMC Acadia received a splendid five-star safety rating. Parking sensors and a rear-view camera come standard. Buyers can also select several advanced safety technologies, including a forward collision warning system.

Over the years, GM’s OnStar communications system has earned its fair share of awards. If the driver needs a helping hand while on the road, the OnStar system will be there to guide them along. Some of the services include turn-by-turn navigation, roadside assistance, and updates on the vehicle’s health. Like a personal assistant, OnStar can also handle tasks such as booking hotel reservations.
Buying Tip: To avoid overpaying on a new car, shop prices online first. Get up front pricing before you walk into a dealership. We recommend the following free services; Car Clearance Deals,   Edmunds,   CarsDirect,   NADAguides  &  Motortrend. These free services will offer you the lowest prices and supply you with multiple competing price quotes. You will know the best price before you visit the dealer.

1) Takes Up More Space Than a Compact Crossover

The 2016 GMC Acadia is not as easy to maneuver like a smaller SUV. When attempting to park in a congested area, some drivers may have a difficult time. Lucky, the SUV comes equipped with rear parking sensors.

With a city fuel economy rating of 17 mpg, the Acadia is certainly not known as a fuel-saver. Although its highway gas mileage is a bit better, there are more efficient options on today’s market. The truck-based GMC Yukon delivers nearly the same fuel economy.

Most drivers will be content with this crossover’s performance. However, the Acadia’s hefty weight does impact its acceleration. SUVs such as the V8-powered Dodge Durango are a bit quicker.

Some of the similar SUVs include the Ford Explorer, the Dodge Durango, and the Honda Pilot. Regarding cargo space, the 2016 GMC Acadia trumps its competition. Although the Honda Pilot has a high rating, some people may prefer the Acadia’s rugged styling.

For the families who need a roomy and dependable vehicle, the 2016 GMC Acadia will be a great choice. Because of the crossover’s commendable towing capacity, drivers can easily haul jet-skis and motorcycles. Features such as the standard Wi-Fi hot-spot will also appeal to a lot of shoppers.
2016 GMC Buying Guides: