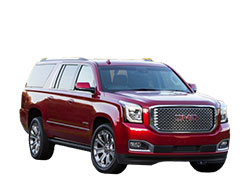 The vast open American spaces, large families and countless recreation areas, all seem to conspire in creating a ready market for big family vehicles. The 2016 GMC Yukon XL 4WD is smoothly fitting the needs of Americans who want the ability to move up to 9 people in a single haul, tow along a larger trailer, and move to any place no matter the weather.

In 2015, GMC undertook a redo of the Yukon, giving it a more angular external to give it a boxier, yet more modern look. Also updated was the Yukon interior. For the year 2016, though the changes made on the Yukon are largely small, they are important. For example, the 2016 XL 4WD has added Driver Alert Package, lane-keeping assist as well as automatic high-beam control.

The 2016 Yukon XL is hard to ignore if you are looking for a full-size SUV that is value-packed and capable of towing, and ferrying a large group with lots of cargo - all at the same time

The 2016 Yukon XL is certainly a capable workhorse. Reviewers have praised the powerful engines that don’t seem to struggle even when you’ve packed passengers and lots of cargo. Auto critics report that the composed handling and well-tuned suspension make maneuvering simple.

Beyond the visible cosmetic upgrades, maker GM has done terrific work on the vehicle handling.

One would be mistaken for assuming that the cavernous space of the Yukon XL causes stress at the fuel pump, although this is far from the truth. The 5.3-liter V8 engine is in fact among the most efficient available in today’s market. If required, you can even disable cylinders when you don’t need them.

According to auto critics, the infotainment system on the 2016 model of Yukon XL is simple and straightforward to use, although some note it responds a bit slowly to the driver’s touch inputs.

Critics concur that the cabin of the 2016 GMC Yukon XL 4WD is built with plenty of high-end materials and soft-touch surfaces made of wood plus metal trim. Controls are easily reachable from the driver's seat because of great designing.

Reviewers agree that the 2016 Yukon’s front seats are quite comfortable and supportive, while the 2nd row is roomy, giving the space a limo-like feel. The large rear doors make entry into the 3rd row easy, although the seats are rather low.

Auto experts recommend that if what you want is no-compromises towing and hauling ability, the 2016 GMC Yukon XL is the perfect ticket.

Auto reviewers have reported that for its class, the 2016 Yukon XL presents one of the largest capacities regarding overall cargo capacities. It also comes with a hands-free lift gate.

A new feature is power folding for the 2nd and 3rd-row seats because the third row can no longer be removed; instead, it folds flat on your cargo floor. Another additional feature is a cargo-management system that is tucked away under the floor which can also be removed to create extra cargo space.

The sheer size and weight of this 4WD Yukon brings obvious body mass advantages in any auto crash. The 2016 GMC Yukon XL 4WD is also offering several other active safety measures such as:

The 2016 GMC Yukon come nicely backed by a comprehensive warranty for 3-year/36,000-mile, in addition to a powertrain warranty for 5-year/60,000-mile. So far, the XL has not suffered any NHTSA safety recalls.
Buying Tip:

A major snag in an otherwise nice setup is that occasionally, the 6-speed automatic transmission exhibits some level of delay before it downshifts when you stab the throttle while underway.

2016 GMC Yukon XL 4WD critics note some drivers might find themselves unable to get a good driving position as the base model lacks a telescoping steering wheel.

The Yukon XL 4WD third-row seat may be okay for small children, but the low mounting to the vehicle floor may mean that taller people and lanky teenagers will most probably find their knees being pushed up towards the roof uncomfortably.

Although the infotainment display is easy and intuitive to operate/navigate, unfortunately, the IntelliLink at times can be rather slow in responding to driver touch inputs.

The gas tank of the 2016 GMC Yukon XL Denali is according to drivers, too small as it holds just 31 gallons. Being a heavy duty XL, this may prove a drawback as you need to make frequent stops when on a long drive.

It is fair to compare the 2016 GMC Yukon XL 4WD against the Chevrolet Tahoe and Buick Enclave 2016 models being of the same class and category.

The 2016 GMC Yukon XL is available from about $48,000 with the 4WD options pushing the price to the $60Ks. Yukon XL 4WD of course comes better-equipped with lots of accessories and SLT trim. It is probably the most affordable 9-passenger 4WD vehicle available in the market today. Its extensive configurations make it highly competitive.