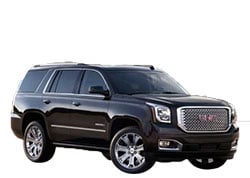 Should You Buy a 2016 GMC Yukon? Here are the Pros and Cons

Motor dealerships are today overflowing with huge, 3-row crossovers that are well suited for ferrying all your cargo and family while offering a driving experience that is more civilized than the older version huge truck-based behemoths. In this regard, the 2016 GMC Yukon can be termed as a genuine survivor.

For the 2016 Yukon, GMC has brought in some hardware and technology upgrades. Among these you will get:

The 2016 Yukon comes with a V8 5.3-liter engine, generating 383 pound-feet of torque and 355 horsepower. Estimated EPA fuel economy is surprisingly low, but for a full-size SUV, this is quite respectable. The maximum towing capacity is 8,400 pounds.

So long as you don’t confine your Yukon, it can run comfortably, negotiating all manner of winding roads, and to deliver acceptable and reasonable levels of braking and steering feedback.

The 2016 GMC Yukon passenger cabin is both high quality and attractive.

The 2016 Yukon cabin is also a beneficiary of a variety of sound-deadening measures giving it a hushed ambiance that you can normally only get in luxury cars.

4) A Nice Blend of Old and New

This big SUV from GMC has retained the classic combination of rugged V8 power and the classic body-on-frame construction.

The 2016 Yukon is also providing seating for nine passengers, something that even a standard minivan may not cope with or offer.

Seats upfront are supportive and comfortable. The decision to install bucket seats or the up-front40/20/40-split bench plus the standard 2nd-row bench offers a rare seating flexibility not common today. Additionally, the power-releasing 2nd-row seats have made getting in or out from the 3rd-row seat a bit easier.

The 3rd row's ability to foldup into the vehicle’s floor is a certainly a marked improvement when contrasted against previous generation Yukon’s. This has boosted the aspect of cargo carrying greatly as now you don’t have to wrestle the 3rd-row seats in and out.

The Yukon has attained commendable ratings from the NHTSA for high levels of safety.

The available safety equipment on the 2016 GMC Yukon includes:

The infotainment systems from GMC available in the Yukon are appreciated for their ease of use and simplicity.

Similar to the majority of GM vehicles, the new 2016 Yukon now comes with 4G LTE interconnectivity.

The standard 5.3-liter V8 on the 2016 GMC Yukon is quiet and smooth on the road. Yet it still possesses the punch to haul cargo and people from one point to the next without breaking a sweat. These SUVs versions, despite their large size, are surprisingly quite easy to drive.

Being a new 2016 launch, there is currently no reliability data accessible for this year’s Yukon. Similarly, the vehicle has not yet had any NHTSAsafety recalls.

The warranties for the 2016 GMC Yukon are:

Many critics have observed that this is one aspect where the 2016 Yukon has fallen short. That 3rd-row may simply be described as cramped.

The new changes in the 2016 Yukon have resulted in a load floor that is substantially higher.

A leading weakness of the 2016 GMC Yukon is that the engine has delayed response to the driver’s throttle inputs. When you step on the gas pedal, you will notice a perceptible hesitation, particularly when you want to accelerate from a standing stop or at highway speeds.

The kind of ride offered by the Yukon’s base suspension is certainly not of the best quality. Even small road imperfections will send shakes and shivers into the Yuko’s cabin as a result of the old-fashioned solid rear axle. When it comes to handling, the Yukon either doesn’t perform like its leading full-size SUV rivals.

Auto reviewers have pitted the 2016 GMC Yukon against the 2016 models of the Buick Enclave and the Chevrolet Tahoe.

The 2016 GMC Yukon is probably the most cost efficient and affordable 9-passenger automobile available, with extremely competitive configurations. When pitted against its closest competition, you will be getting tremendous value when you opt to go for this model. If you are a shopper that is out for safety, capability, space and value, then your best option would be the 2016 GMC Yukon.
2016 GMC Buying Guides: